7 Steps To Dealing With Uncertainty

My neighbor has just been diagnosed with cancer. I can’t imagine how she and her partner are dealing with it. I guess it’s not something anybody knows how to deal with.

She’s in her 60’s. Too young to die. Undeserving of the battle ahead.

Change comes whether we like it or not. Sometimes it’s good, sometimes not.

Yesterday I was speaking with a gentleman who has become a friend. We speak regularly and I enjoy his perspective. He’s intelligent (wise, actually) thoughtful, and open – the ingredients for humanity. We discussed risk and uncertainty and how we’re both dealing with it.

There is nothing evidenced on his horizon to seriously worry about. That’s today. But what about tomorrow?

What I realize we’re all dealing with in differing shades is uncertainty.

Uncertainty, pressure, stress. They’re not all the same thing but they come from the same family. Pressure can be good. But stress never is. Pressure can be a motivator and stress is a destroyer. But uncertainty is often at the foundation of both.

At the far end of certainty is often where it doesn’t exist at all. Just when everyone thinks one outcome is so certain, the opposite is often true. My friend Brad McFadden and I discussed this last week. When the market is so certain of a particular outcome, we often find the potential for the biggest and most profitable change existing.

Humans always search for certainty. Finding certainty allows us to plan, and when we have a plan we’re in control.

But as investors, we deal with uncertainty on a daily basis. And while rather philosophical, here are 7 guidelines that I’m trying to personally adopt to overcome the stress that can often comes with uncertainty:

It’s a cliché to say that the world’s changing. No, the world has always been changing. What’s happening is that it’s changing at an exponential rate. This means adaptive people thrive. Learn to be adaptive.

There are some unstoppable trends in motion and fighting them is futile. If I was in manufacturing, I’d be seriously worried right now. 3D printing is here, making waves and it’s only just getting started.

Then we have currencies. The USD is a terrible currency, issued by a bankrupt government. But right now, and for the next few years, it’s in a bull market. It’s gotten a bit ahead of itself, so a pull back and consolidation are both necessary and expected. 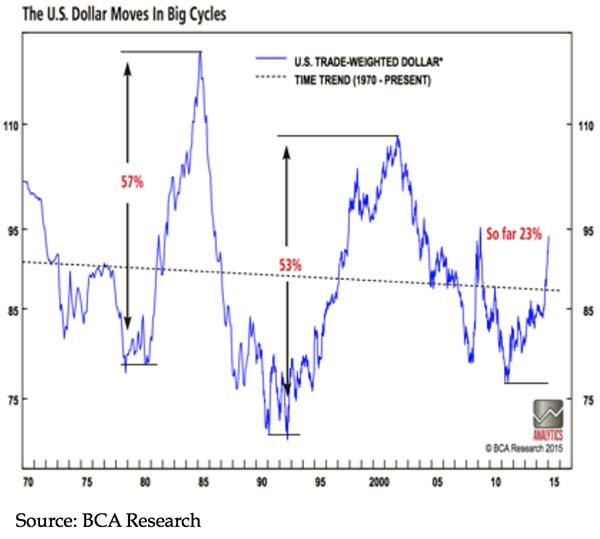 Near as I can tell, the dollar will do well for a few years before succumbing to the debt burden we’ve all feared bringing about a rise in bond yields and inflation. That promises to be spectacular but we’re not there yet.

3. Be always wary of being wrong.

See point 2. I may be wrong and I’m watching vigilantly. Arrogance and ego are two killer diseases. Don’t get sick.

Change brings opportunity but in order to take advantage of opportunity it’s highly likely you’re going to need to learn new skills. This means investing in yourself.

We’re no longer living in the industrial age. If you still have a loyalty to some arbitrary flag flown by a bunch of bureaucrats you’re living in the past. The nation state is going away. There is no safety in that space any longer. Loyalty should be given to trusted people. To those who have your best interests at heart.

When it comes to trading and investing, be open to being wrong. Being wrong happens. The best investors in the world get it wrong occasionally. What kills is being wrong and failing to see you’re wrong. That is unforgivable.

Expecting the worst prepares you mentally to identify risk well before the risk can wipe you out. The opposite of this is living with your head in the sand. Expect it, even welcome it, knowing that you’ve got the ability to deal with it.

The greatest gift that humans have over other species is our ability to adapt. Aside from cockroaches, we are the most adaptable creatures on the planet. Have a belief in your ability to overcome the worst. A positive attitude is a must to dealing with uncertainty.

It’s easier to remain positive if we have a belief in our abilities. Psychologists talk of “defensive pessimism”. It means considering the worst that can happen and then planning to avoid and or manage that scenario. Most of the time what you’ve considered is never as bad as it turns out to be, and if you’ve planned for it it’s easier to deal efficiently with it.

When I think about all the changes that I’ve seen just in the last few years it’s clear to me that change is accelerating. This is the phenomenon I discussed with Kent Langley and, whether we like it or not, that is the world we’re living in. It’s an exciting, rapidly changing dynamic world and the first step to succeeding in it is in realising it exists and preparing ourselves mentally for it.

Chris has founded and built several multi-million dollar businesses in the investment arena including overseeing the deployment of over $30m into Venture Capital opportunities and advising family offices internationally. Prior to this, Chris built a career at Invesco Asset Management, Lehman Brothers, JPMChase, & Robert Flemings.
MORE ARTICLES »
PrevPreviousAn Out Of The Box Emerging Markets Opportunity
NextWho’s Solving This Problem?Next