A Gift From The Oldies 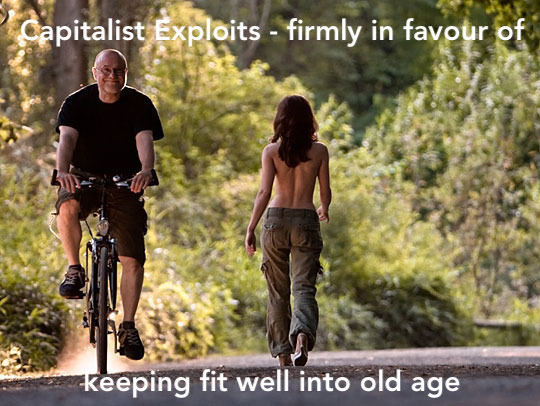 I bumped into a friendly bloke at my local gym last week. Jim is his name.

Jim tells me he just started because, and I quote, “my doctor says I’m going to die unless I do something”.

Now, I assure you it doesn’t take a doctor to figure this out.

One glance in Jim’s direction and you can tell that underneath all that weight there’s a big struggling heart in there… just ready to explode. He was surprisingly frank and tells me it’s so bad that he can only do little bits of exercise because if he pushes it too hard, there is a very serious risk that his ticker just says, “You know what… f*ck it,” and gives up.

I feel for Jim, told him so, and naturally we all hope that he can bring himself back from the brink. But the fact is many people aren’t like Jim. As mentioned in a previous article on pensions, they’re living longer and stronger.

Years ago it seemed that when you hit 65 you’d retire, receive a gold watch, and proceed to spend your pension money on a rocking chair and pot plants. Ten years later you’d be in a box and, since pot plants are cheap, the cost of keeping you alive wasn’t prohibitive.

Not anymore. Today things are different. My wife belongs to a running club and there are a bunch of octogenarians there who put us both to shame. Nope, today you retire and spend your pension on kickboxing classes and second wives, with no plan of dying anytime soon.

You see, unlike Jim, these folks, who’ve spent their life exercising, go on and on and on.

70 is spring chicken young for them, and many make it well into their 80’s and 90’s when inevitably they need nappies, nursing care, accommodation, and mushy food to eat. And then finally machines on wheels need to be wheeled in and they end up with tubes in their noses. Don’t laugh. We’re all going to get there, unless we’re fortunate enough to just drop dead quick and fast. The point is this all costs a boatload of money.

Now, I’m aware that this topic isn’t rosy Friday red or shampoo advert fresh and clean, but there are some serious implications that I think you’ll thank me for so hear me out.

Demographics is an elephant in the room we shouldn’t ignore. It’s stomped around, defecated in the corner, and is now proceeding to knock over all the furniture. Ignore it at your peril. Rather, there are a number of ways to invest.

Old people (Mabel and Bob) pay for their retirements with pensions, and those pensions are held in pooled accounts at the DTC and managed by folks with pointy shoes and Tom Ford suits.

And because old Mabel and Bob are closer to the box than younger folks, the pointy shoed gents are extremely risk averse (as they should be), and this is where it gets exciting because you know what?

They’re presently engaged in the worst possible leveraged speculation you can think of.

Pensioners are engaged in the worst possible leverage speculation you can think of (and it's not Bitcoin).Click To Tweet

First, to understand the insanity we have to take a step back and examine how these pointy shoed gents think.

They like fixed income because it’s far less volatile and ostensibly less risky than equities.

They hate small caps and frankly can’t invest in them due to their size, and they have a disdain for commodity markets. That volatility thing again…

In fact, volatility is like a barometer in their world by which everything else is measured.

The problem is with central banks shatbit crazy interest rate policies none of them have been able to make any money in a yield starved world and so they’re, wait for it, selling volatility.

Either through tailor made products from the investment banks or by buying any number of the low volatility ETPs out there. 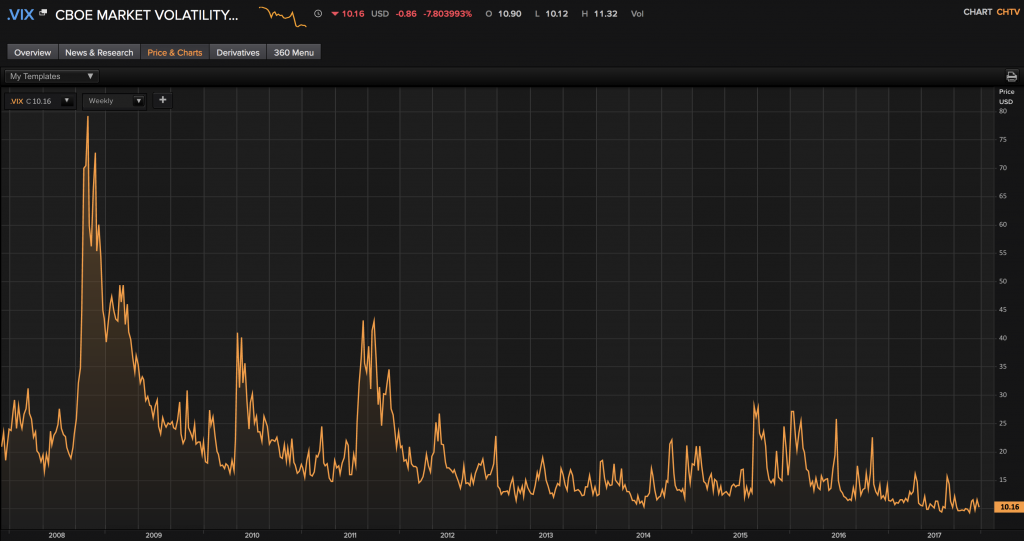 Volatility isn’t even an asset.

In fact, the VIX is an index of volatility on 1 month to expiry ATM puts and calls on stocks in the S&P 500.

But now the geniuses on Wall Street have figured that they can actually package this animal, which as you can see, is a derivative of a derivative, and treat it like a bond. Fun, heh?

In all fairness, hats off to the asset managers who’ve had the balls to do this. They believed in the central banks’ liquidity machine, and they backed their belief and for that they deserve to be paid. I sure wouldn’t have been able to do it.

Now, I’m not some miserable jealous git here to tell you that armageddon is coming and I’ve the answers.

God knows there’s enough of that nonsense in the financial publishing blogosphere for you to get your fill elsewhere. What we do know, however, is that this entire game: the selling of vol, the passive indexing — all of it is predicated on one thing. The central banks keeping rates low and pumping liquidity into the market. It’s why BTFD has become a meme.

The problem that I have with it, other than the distortions made, is that when so many are on one side of the boat like right now and that boat has many moving pieces, then I begin to wonder.

I’m reminded that markets change at the margin, where the slightest hiccup can act like a spark to light the fire of volatility, and these poor suckers who’ve managed to earn steady incomes selling puts find out what “unlimited risk” actually looks like as they’re forced to cover in a market that’s gapping the other way.

I’ve thought about this a lot and, in fact, we recently published how we are going “long vol” for members. And no, it’s not buying puts on VIX because that is, in my humble opinion… how do I say this politely, like begging to be stabbed in the eyes. repeatedly.

In any event that’s just one angle to this market. Here’s another.

I would be remiss in mentioning that as retirees retire, these pension funds will be drawn down.

It’s what Mabel and Bob do to pay for their mushy food, viagra, and bingo nights.

Now, I’m sure you’re all sharp enough to figure out what can happen to the assets these guys have been buying when they have to go from flat out full throttle, to stall, to reverse.

How big is this problem?

Well, for some context global institutional pension fund assets in 22 major markets stood at US$36.4 trillion at year end 2016, amounting to 62% of global GDP.

That is a staggeringly large amount of money.

Pension funds are big cumbersome dumb money. And they’re all allocated in equally dumb indexes, passive strategies, and bonds. So what happens when pensioners draw down on their funds?

Talking of staggeringly large amounts of money, the passive bubble grows bigger as I write this because this beast is fuelled not just by our pointy shoed friends but by Joe Sixpack himself. 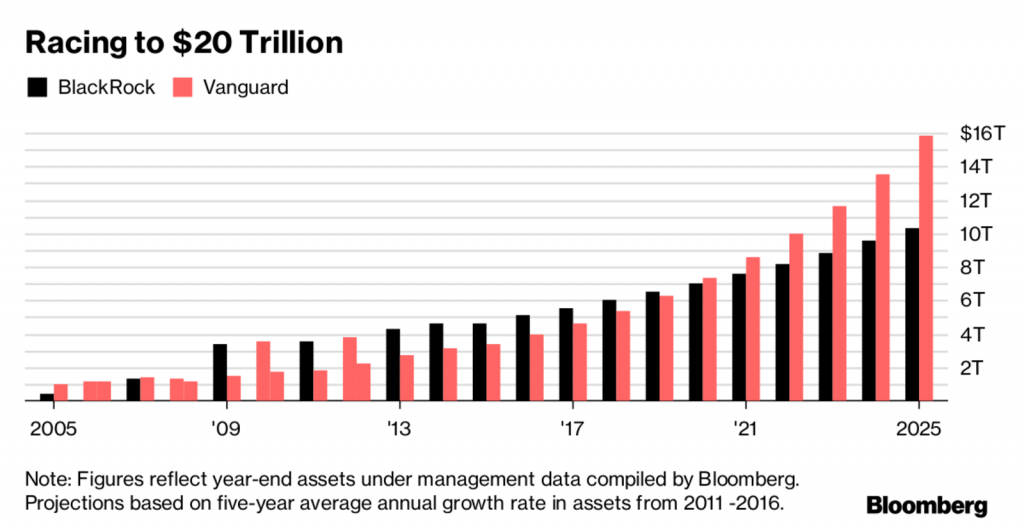 The article goes on to say:

Investors from individuals to large institutions such as pension and hedge funds have flocked to this duo, won over in part by their low-cost funds and breadth of offerings. The proliferation of exchange-traded funds is also supercharging these firms and will likely continue to do so.

Sometimes when everyone is zigging and you zag, you just get run over. But think about it…

We don’t need to go the other way. All we need to do is look where others are no longer.

These behemoths don’t do battle in the little unloved sectors or with stocks that don’t make it into an index. They can’t because they’re too big.

Which brings me to the double helping of good news.

Here’s your competition in active with the accompanying passive. 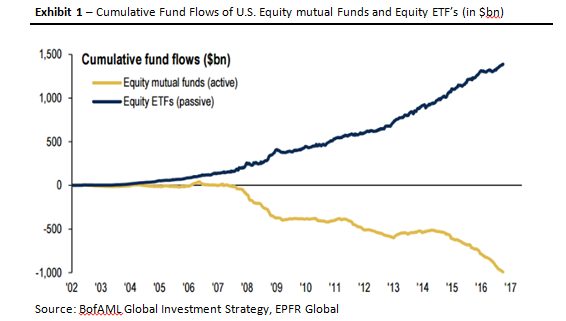 Right now, it’s a mosh pit food fight to grab and create the next index or ETF so that more capital can be attracted, earning more fees, buying more suits.

This is all well and good.

Markets do what markets do, and I’m not here to grumble about it. I’m here to make money. And indeed if I was in the passive business, I’d be enjoying the steady stream of fees and hoping like hell the market keeps going up.

I’m a humble squirrel searching for nuts in the forest. And gosh, with all this moshing going on it’s wonderful how few other squirrels there are about. The same Bloomberg article makes a good point on this.

While bigger may be better for the fund giants, passive funds may be blurring the inherent value of securities, implied in a company’s earnings or cash flow.

Stocks in the index funds no longer trade on fundamentals but rather on asset flows, which sucks the oxygen out of the small guys who don’t make it into the indexes where passive money is playing.

It means we can gladly play in a sandpit with all the toys and there are very few we have to share them with.

The Cracks Have Already Appeared

Nothing lasts forever, and as I argued when discussing the impact of the incoming strong men on the global economy, there are 3 critical points worth thinking about:

Invest accordingly, and thank you for reading.

“If you can’t take a small loss, sooner or later you will take the mother of all losses.” — Ed Seykota