There is a bull market developing in gold and few are aware of it. Given the seemingly endless urge to “stimulate” economies by central banks through quantitative easing (money printing), such as the ECB, BOE, & BOJ, it isn’t difficult to imagine that gold’s rally in multi-currency terms is still in its infancy.

Ask any investment professional “what is the price of gold” and they should be able to tell you what it is within $100 of its last trade. However, ask them what it is in their home currency terms and few if any would be able to give you a reasonable approximation! This is odd because if anyone in Australia wants to buy or sell gold then it will be exchanged in AUDs or euros if anyone lives within the Eurozone.

It is said that a true bull market creeps up on people when they least expect. Perhaps because everyone is still talking about the bashing that gold took since 2011, they are overlooking the fact that gold has remained more or less unchanged in USD terms for the last 18 months and it has begun to trend higher against every other currency!

Before I take a look at the behaivor of gold in multi-currency terms you might like to listen to a brilliant interview with Felix Zulauf. This interview gives a well thought out overview of the world economy and how gold fits into the situation.

Let’s now look at the behavior of gold against a basket of paper currencies.

Gold in USD terms – a bear trend since 2011 perhaps but it hasn’t been able to make a new low over the last 18 months – no mean feat given the strength of the USD during this time! 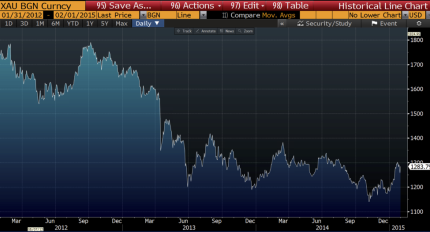 Gold in AUD terms – since the start of this year it has moved higher in dramatic fashion and broken out of an 18 months old trading range. 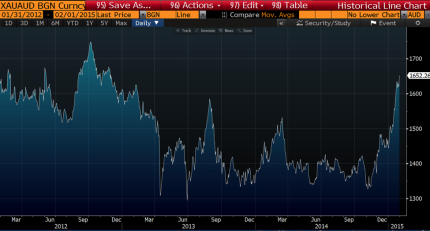 The behavior of gold in AUD terms is more or less echoing what is happening to it in CAD terms: 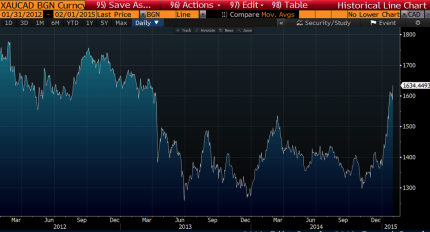 While the 18 months old trading range of gold in AUD and CAD terms is a little “ragged” there is no missing the trading range in euros. Since the start of the year it is up by some 11%! It’s interesting to note that this move higher happened before the ECB stated its quantitative easing program. 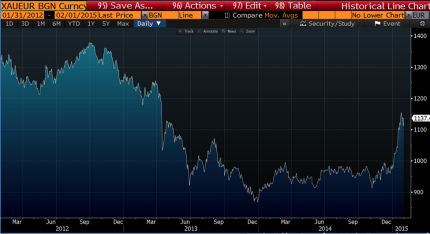 Is the next “trading range” about to be broken? Take a look at gold in renminbi terms. One can debate whether or not the behavior over the last 18 months constitutes a trading range but one thing is for sure – a little more upside and we will have a multi-month high! In my eyes this is good enough to constitute the start of a bull trend. 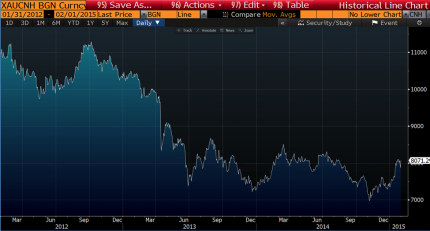 Finally – gold in Swiss franc terms. Make of it what you will but it seems to me that the SNB unpegging drama is just a short term thing – it should trade at a multi-month high within the coming weeks. 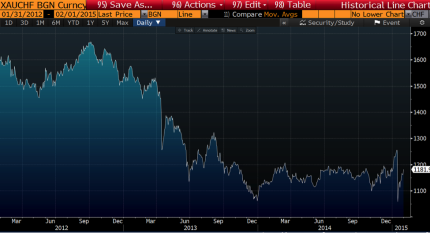 Has gold registered a long-term bottom? From a technical perspective it appears so. From a more “fundamental” perspective, given that gold has been unable to trade below the $1200 level for more than a few weeks since June 2013 and most gold miners have been losing money over the last 12 months or just barely breaking even, it would appear that the $1200 level is the cost of production. So on a cost basis alone below $1200 there will be no additional capacity bought on-line at best, more likely significant supply shut downs (which have already occurred). This makes economic sense because miners cannot continue to lose money.

It is a very different situation with the “supply of money”. As far as central bankers are concerned there is absolutely no negative consequences to printing money. There appears to be this inherent belief that the weaker ones currency becomes the better off the economy will be. This is because there have been no inflationary consequences to monetary stimulus/money printing – at least not yet! Perhaps what they have overlooked is the delayed consequences to their actions!

At the end of the day the price of anything is determined by the interaction of supply and demand. Increase or decrease either supply or demand and the price of money/gold will change.

After managing high net worth private client funds at Henry Ansbacher, Brad managed a proprietary trading book for Rand Merchant Bank in South Africa & Australia. Brad’s speciality is in identifying opportunities in extreme out of favour themes globally and executing strategies to achieve asymmetric payoffs
MORE ARTICLES »
PrevPreviousThe US Dollar Bull Market is Alive and Well
NextThis is the Land of Milk and HoneyNext