And the Bloodletting Begins…

Last week at my son’s football game, a fellow parent remarked to me that bald heads are cool. I actually thought the guy may be off his rocker a bit, but then I figured that maybe he was trying to be nice as I’ve got more hair on my big toe than on my shaved head. Then realization struck…

This guy was trying to comfort himself as he was trying unsuccessfully to cover his own balding pate.

Hiding balding can drive men nuts. You can look like Donald Trump, though someone needs to tell him he looks completely ridiculous. With all the money in the world, it’s clearly not possible to get a decent looking rug, and then you’ve got to ask yourself the question, who on earth could be bothered with putting up with all the rigmarole of sticking the thing to your head all the time? And what happens when you dive in a swimming pool or venture out on a windy day?

If rugs aren’t your thing you could shoot for a hair transplant and end up with something that looks like a seed tray in a high school science lab experiment. Or you can look like your mad uncle George – don a stripy cardigan and do the comb over.

Let’s face it: all options at hiding it are outright terrible. There are therefore only two realistic solutions to the problem. One is to hide indoors and never come out, and the other is to reveal it, get a grip and get on with life.

This brings me to China who have been using all means and measures to hide the true situation in their financial markets.

Blowing through $800 billion in public and private money in an attempt to prop up their ailing stock market has produced a muted response. Based on public statements, media reports and market data, we know that Beijing has just blown through at least 5 trillion yuan. This is an unprecedented amount, equivalent to nearly 10 percent of China’s GDP, and a trillion more than they committed in response to the global financial crisis in 2008. All this to calm a stock market sell-off. I say “at least” since we don’t really know how much Beijing has done under the covers and the opacity in China is legendary.

A Reuters article described it well:

While the market stabilised, with the Shanghai Composite Index SSEC recovering about 20 percent by Thursday’s close from a low point around 3,300 points struck on July 8, it is still below the semi-official recovery target of 4,500 points.

Beijing has thus produced the equivalent of around 1 index point gain for every $1 billion committed.

The selling pressure is clearly not of the garden variety. The problem is that the fundamentals don’t support the still lofty valuations.

As interesting as the stock market is, our interest lies in the currency, something we’ve been writing about since late 2014. We believed that the big move was to be in the RMB and while every man and his dog was trumpeting the end of the dollar and the rise of the yuan we felt that, while this certainly was getting investors giddy, it was plain wrong.

Back in December in an Brad was wondering about what China’s banking system was telling us?

The behavior of the interbank lending market can provide one with a good appreciation for the liquidity of the banking system as a whole. If there is a lot of liquidity in the system (more short term assets than liabilities) the interbank rate will fall, if there is scarcity of short term assets relative to liabilities then rates will rise. So a rising interbank rate is generally associated with contracting liquidity conditions. Rapid rises in interbank lending rates are often associated with banking or credit crisis. This happened in the lead up to the GFC.

Brad dug in and looked at interbank lending markets for a host of emerging market currencies and showed how China’s HIBOR rate was going parabolic, indicating stress in this market.

Fast forward till today and it’s no surprise to us that the PBOC has devalued. 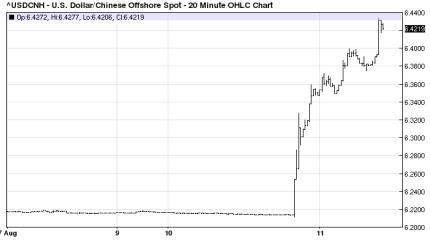 This is what the PBOC have officially called it. Ha!

An export driven economy with a rising currency in the midst of a global currency war has created a gigantic USD carry trade with its epicentre in the Middle Kingdom. Beijing needs a strong economy to support a strong currency and signs are everywhere that growth is falling.

What many people don’t realise is the self-reinforcing nature of an unwinding carry trade. Each tick down in the cross rate between the funding currency (USD) and the funded currency (RMB) acts as reverse leverage and forces additional participants who are short USD to cover and buy back their USD positions.

Just over 30 days ago when I suggested that the market was making a mistake in pricing volatility in the USD/CNH cross pair this allowed us a rare opportunity to position for a move either way for a stupidly cheap cost. While we’ve been bearish we actually had the ability to take on both positions for just 2.8% premium. I called it a gift…and it was.

Buying both is what traders term a “straddle” but don’t get hung up on terminology. The point is that for a 2.8% premium (2.5% + 0.3%) we can hold both positions. We don’t much care which way it moves but simply that it MOVES!

We may be looking at the last chance salon to putting on a short RMB trade before this gets out of control. When a central bank tells you it’s a “one off” event you may as well take that as a green light.

“It’s hard to believe this will be a one-off adjustment. In a weak global economy, it will take a lot more than a 1.9 percent devaluation to jump-start sagging Chinese exports. That raises the distinct possibility of a new and increasingly destabilizing skirmish in the ever-widening global currency war. The race to the bottom just became a good deal more treacherous.” – Stephen Roach, former Chairman of Morgan Stanley Asia

Chris has founded and built several multi-million dollar businesses in the investment arena including overseeing the deployment of over $30m into Venture Capital opportunities and advising family offices internationally. Prior to this, Chris built a career at Invesco Asset Management, Lehman Brothers, JPMChase, & Robert Flemings.
MORE ARTICLES »
PrevPreviousThe Power of Shut Up!
NextThis Advice Has Cost Investors a Sh*tload of Money… and It Promises to Get Worse!Next

Great article and spot on. Do you guys have an offshore broker that you recommend that will do this trade for non US citizens? I checked with mine and he said he didn’t do the USD/CNY trade. Any suggestions? Thanks!

Yes Chris another good article on this opportunity.

Is there any chance you could provide usable info on how to put this trade on.
Thanks.

Well Done Chris!!! How accurately predicted! I read you’re article a month ago and thought it sounded perfect sense. I asked some people here in UK how I might make a similar trade and could n’t get any sensible answers, Chris is this something individuals could trade from the UK? Thanks Jenny