The late 20th century was good to most Western investors. On the back of accumulated capital, a free-market based system (sort of), and a largely non-interventionist government (again, sort of…), boomers built businesses and consumed goods at an unprecedented rate. This allowed stock markets to enjoy a historical bull run. Technology enhancements enabled rising living standards the world over and of course we all learned how to ditch Post It(TM) notes for cool jingling reminders on our mobile phones, Blackberry, iTouch and now iPads.

Growing like parasitic cancer underneath this foundation of wealth building was the rise of government and those that inevitably saw the opportunity to feed at its breast.

An Unchecked Parasite On The Rise 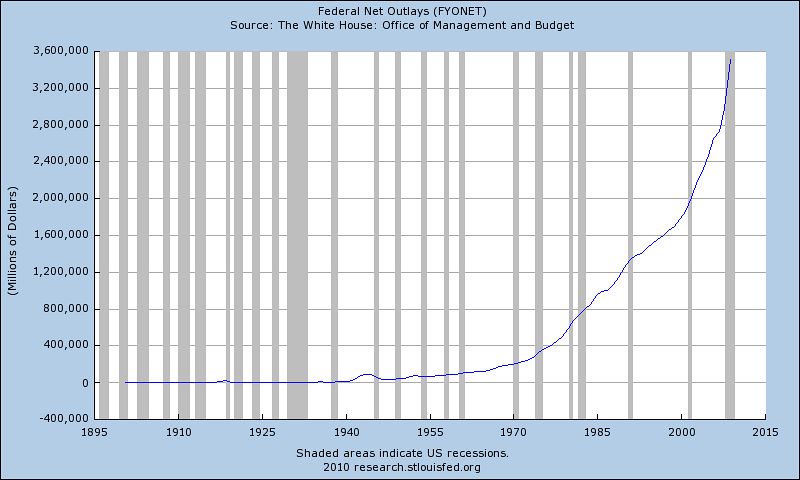 Often taking credit for the successes of business and the rising standard of living, both of which could and should be laid squarely at the feet of entrepreneurs, the cancer (government) has grown. This graph illustrates government debt growth. Along with the growth of government has come growth in regulation in any and every industry. Regulation is all too often taxation by a different moniker.

Large banks, which today act more as parastatals, have leveraged the system and sucked in enormous amounts of capital from the average investor, who either didn’t know what was taking place or were under the assumption that regulation would not allow abuses. (Rating agencies paid for by those being rated leading to disastrous consequences…. baffling stuff). Individuals didn’t care where or how their funds were invested as long as they kept growing year on year.

Mutual funds became an easy way to park savings and outsource the responsibility of managing one’s own capital. The supply side of these funds grew and so naturally too the supply of people who would manage those funds grew.

For the most part however, making and managing money couldn’t have been easier. Buying a broad selection of stocks across diversified sectors provided positive returns regardless of any business acumen or due diligence performed by analysts. At the same time fund managers could and did buy all manner of garbage, but the fees kept rolling in.

Why? Two reasons. First, the returns remained positive due to an ensuing bull market; and, second and even more importantly, marketing budgets outweighed research budgets and often still do. Go figure.

2008 brought a shock to many and especially those who had surrendered the responsibility for managing their money to others. When you manage your own investments and have a thorough understanding of what you are invested in, coping with draw-downs is a completely different beast to the situation of seeing draw-downs and having no clue as to what your money is actually invested in. Suddenly you become interested in finding out what on earth you own.

Faith in stockbrokers, bankers and regulators plunged, and rightly so. Faith in government and their ability to “fix” the problems is consequently following directly on the heels and it’s about high time in my opinion. These people are both morally bankrupt as well as comically inept.

What does this have to do with angel investors you may ask?

When investing as an angel there is no “regulator” that will watch out for you, there is no marketing budget that makes things look rosier than an English garden in May, and there is no analysts stock ranking to rely on.

Even when investing capital into a mutual fund it is still your responsibility to know what you are investing in. Regulators, credit rating agencies and those purported to “help” you are a greater danger to you than if they never existed at all.

When investing as an angel you are well aware that responsibility is yours and yours alone. There is only you, your hard-earned capital and the company you are financing. The fact is, this is no different from the world of investing in listed stocks, mutual funds or any other regulated security it just isn’t necessarily recognized by the vast majority of investors.

Brokers will argue that it is too complicated and difficult. They don’t get a cut, so why bother doing anything but scare you. Just remember, if an investment cannot be explained to you in plain and simple English in less than 5 minutes, then whatever is being marketed to you is a “product” designed to sound sexy and lucrative. I have met these “marketing professionals” and can tell you that many of them do NOT understand the investments that they are marketing themselves. They’re marketing experts first and foremost, they just so happen not to be selling used cars or Amway products.

Angel investing for me means that I don’t have to deal with all the Armani suits, carefully coiffed hairstyles and the pretentious double-talk that all too often comes with it. I deal with the guys on the ground – directly. Why include a third party? Deals are cut in warehouses with the stench of gasoline lingering in the air, with a CEO wearing overalls and offering you coffee in a stained, broken cup; or, in coffee shops at the beach, where the CEO runs his Internet business from his iPhone and laptop while sporting board shorts.

It makes more sense than ever to take control of your own investments and understand what you are investing in and why. Poor regulation is not going away and the cozy relationship between Wall Street elites and Government isn’t weakening any either. I’d argue the contrary. Whether you invest directly in listed companies, or in angel deals the principles are the same and the control is where it should be… in your hands.

I urge you to take responsibility for your investments and gain control over your present and future financial position.

Later this week I will talk about some aspects of angel investing that I hope will be of interest to you.

Chris has founded and built several multi-million dollar businesses in the investment arena including overseeing the deployment of over $30m into Venture Capital opportunities and advising family offices internationally. Prior to this, Chris built a career at Invesco Asset Management, Lehman Brothers, JPMChase, & Robert Flemings.
MORE ARTICLES »
PrevPreviousBehavioral Biases: Is Your IDENTITY Affecting Your Investment Success?
NextInvestment Risk: Dangers of a Single Founder Business and “Ideas”Next