World Out Of Whack: Another Cog In The Exploding Resentment Wheel

Warning signs are flashing everywhere that the status quo isn’t being tolerated anymore. We know that the elites are getting a little nervous and the natives… well, they are getting restless.

Seemingly left field events such as Brexit, the rise of right-wing political parties in Europe, and the “surprising” popularity of Trump are concerning the establishment and so they should.

Another aspect is how people view their position in societies. How Joe Sixpack thinks of himself relative to the rest of his countryman is really important in understanding behavioural economics. Let’s dig in.

Remember when your parents told you that talking to the schoolyard bully was the best way to deal with him, and after a blood nose and black eye you realised that, no, their theory was rubbish and the only way to deal with him was a sharp unsuspected kick in the nuts?

Well, the truth is standard economic theory is rubbish too. Human behaviour is far from rational.

Universities teach standard economics where we’re led to believe that all human decisions are rational and informed, motivated by an accurate concept of the worth of all goods and services and the utility all decisions are likely to produce.

This is of course where the efficient market hypothesis nonsense stems from.

I’ve made a point in these pages of discussing relativity before because it’s so important in behavioural economics. Standard economics doesn’t speak of it.

We value things on a relative basis, which is to say we search for a benchmark. It’s how we find a way of “grounding” our decisions and finding a justification allowing us to get comfortable with them. Often decisions are irrational and predictably so.

One of these irrational behaviours relates to relativity. Independent studies have shown that when a test group is given money they are happy. All good and completely understandable. Rational.

In the same study a separate test group was given money but then it was revealed to them that a group of their peers was given substantially more money. The test group reported feeling unhappy and cheated. Irrational.

Rationally we could argue that this group should be happy with the fact they’ve received money which they never had before, and the fact that their peers received more than them should not decrease their happiness with receiving something, but that’s not how we work.

Ever given one of your kids a slice of cake which is smaller than the one their brother or sister got? Well, it turns out adults are no different.

When this happens at a national level the effects are felt both politically and economically.

This brings me to…

The average income of the richest 10% of the population is about nine times that of the poorest 10% across the OECD today.

For much of the 20th century this wasn’t the case. Everyone got richer together and in fact the income gap in developed countries narrowed progressively until around the 1970’s and 1980’s before the pattern began to reverse.

Since the 80’s the wealth gap has been growing consistently in most OECD countries and since the global financial crisis this inequality gap has exploded higher. Taking massive amounts of taxpayer money and doling it out to a tiny minority will do that. 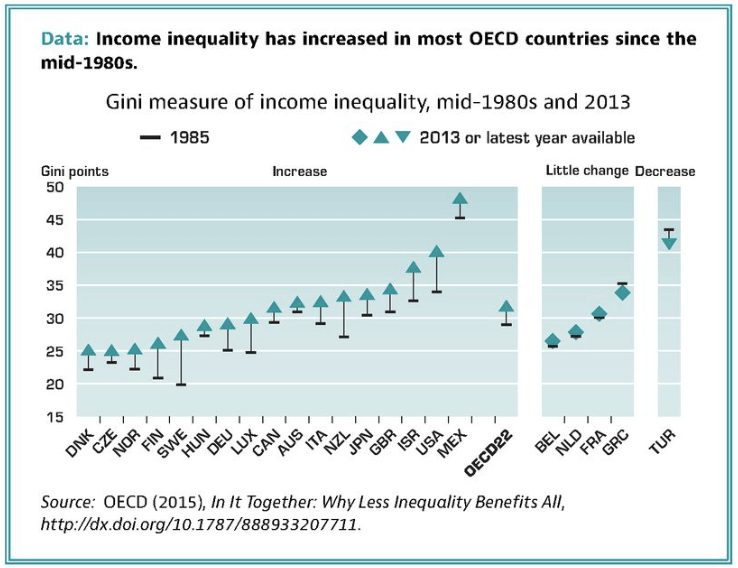 According to an OECD report published last year.

“Since the 1980’s income inequality has risen in most OECD countries. A quarter of a century ago disposable income of the top 10% of earners was on average around 7 times higher than that of bottom 10%; by 2010, it was around 9.5 times higher. Since the mid-1980’s, average inequality in OECD countries has risen by almost 10% to just under 32 Gini points, the standard measure of inequality.

The shift was even more pronounced overroughly the same period among the top 1% of earners, especially in English speaking countries. In the United States for example, the share of pre-tax income going to the richest 1% more than doubled, reaching almost 20% in 2012.”

This trend is strong and growing stronger. In the US between 1975 and 2012 statistics show around 47% of the total growth in pre-tax incomes went to the top 1%. In Canada this figure was 37% and it was over 20% in both the UK and Australia.

The realisation by citizens that this inequality exists is exacerbated when they see blatant corruption allowing for and feeding the inequality. It’s one thing seeing someone get richer than you by hard work and it’s entirely something else seeing them get there via corruption. 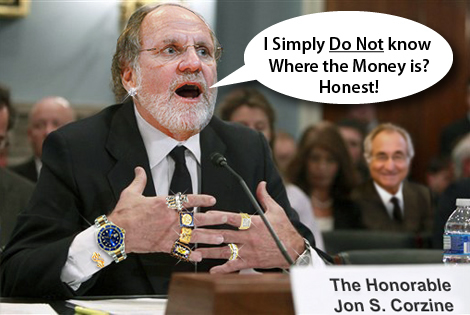 Corzine isn’t the problem of course. Sure, he deserves a bat to the head but he’s a product of a deeper problem. A system which allows for and encourages many Corzines is what Joe Sixpack is fed up with.

As example upon example of crony capitalism has been layered upon the citizenry, they’ve begun to realise that promises for heavier regulation and tighter controls don’t work when business and politics are in a partnership to plunder.

A problem not often discussed is that even though what we have today in much of the developed world is free market capitalism in the same way that McDonald’s is health food, the majority don’t necessarily understand that. This distorted, heavily managed, controlled, and regulated interventionist welfare state entangled with a web of corrupt government-private sector relationships is still labelled as capitalism and that worries me.

The threat of a backlash against capitalism is what worries me most. True capitalism, that is. The rumblings are there and growing stronger. In the UK we watched that manifestation of true economic ignorance: Jeremy Corbyn elected to lead the labour party. This is what the public are voting for. Scary!

What the electorate may get could be worse than what we have, but Joe and Jane Sixpack increasingly no longer care and are prepared to step into the unknown for something… anything… just not what exists now.

There are sectors that will benefit should this accelerate and take place and I’ve got many on my watch list but my question for you today is this:

“Our great democracies still tend to think that a stupid man is more likely to be honest than a clever man, and our politicians take advantage of this prejudice by pretending to be even more stupid than nature made them.” — Bertrand Russell

Chris has founded and built several multi-million dollar businesses in the investment arena including overseeing the deployment of over $30m into Venture Capital opportunities and advising family offices internationally. Prior to this, Chris built a career at Invesco Asset Management, Lehman Brothers, JPMChase, & Robert Flemings.
MORE ARTICLES »
PrevPreviousFacing Reality With Bonds And Currencies
NextPensions, Oy VeyNext