World Out Of Whack: BOJ – Caution To The Wind

Let’s state the obvious, if only to clear the decks and get it out of the way: Japan’s continued failure with monetary policy has been surpassed only by the BOJ’s persistent belief that someday it will finally work.

To remind you – the Bank of Japan’s policy has been to fight deflation, creating an inflation target of 2%. 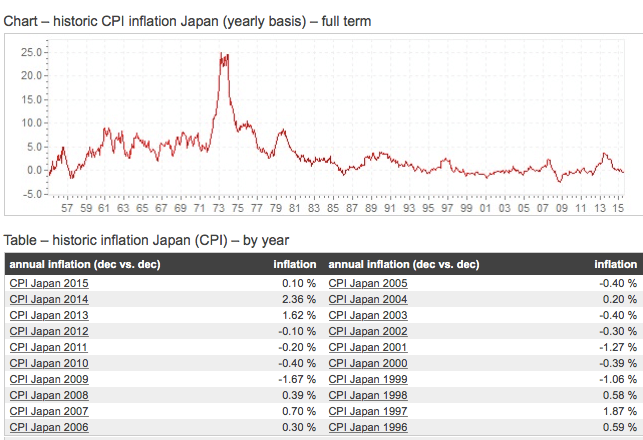 Except for a tiny blip in 2014 they’ve failed miserably to do so, despite a bond purchase program which brings new meaning to the word “unprecedented”.

Two weeks ago the Bank of Japan surprised markets with their shiny new policy plan. Money managers and traders everywhere anticipated something and speculation was rife, especially given that Ben Bernanke, whose policies and thinking are well known, met with the BOJ a few weeks prior. As a result market, participants have been closely studying Bernanke’s statements in order to guess what may be coming down the proverbial pike.

After trillions of yen in quantitative easing and taking bond yields negative the BOJ has failed to bring about any meaningful inflation. We all knew that something was coming but just what that was to look like remained a mystery.

Their new plan is to anchor 10-year bond yields at zero (they are currently below zero). This would mean that they will no longer set a specific number as to how many bonds they will buy. Some have suggested this is mere semantics but I think they miss the point. Regardless of the markets actions the BOJ will buy as many bonds as are required to keep the 10yr at zero. This is significant.

Martin Enlund, Chief FX strategist at Nordea put it like this:

“The Bank of Japan’s new framework is more significant than commonly appreciated. BoJ has voluntarily given up control of its balance sheet. Real rates will eventually plunge, prompting both bond sales to BoJ as well as JPY-negative outflows. Should more stimuli be required, the Japanese government has now been given a helicopterish carte blanche by the BoJ.”

When you know exactly what the ultimate yield on a bond is going to be, regardless of duration, then buying and selling the bonds for speculative purposes makes less and less sense. It’s no wonder volatility has subsequently dropped dramatically.

Imagine, for example, that you’re short JGBs and now the BOJ has just told you that the yield WILL NOT MOVE. The threat of a JGB yield spike is completely gone.

Two very important consequences of this policy shift are forming and they don’t appear to be widely appreciated for the risks they carry.

The day the announcement was made, implied volatility on the Japanese 10-year bond dropped to the lowest level since the 2008 crisis.

Markets are always forward looking and so this is simply the market extrapolating policy decisions into the future. As a result, European and US debt followed suit.

Correlations between the world’s largest bond markets are now approaching 1: 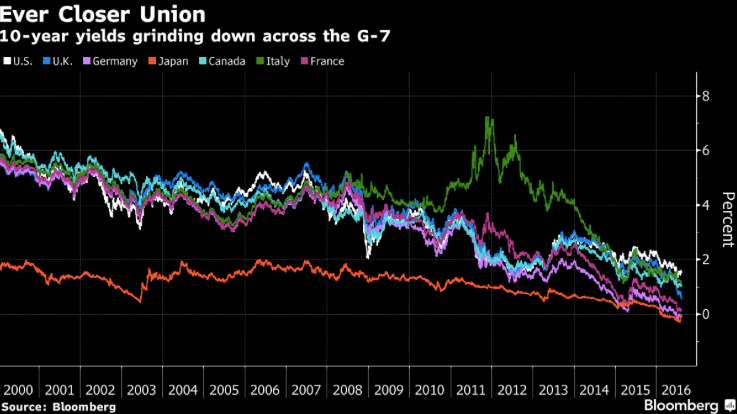 The $100 trillion global debt market is converging, based on a misguided, though understandable belief that all policy measures irrespective of whether it be the ECB, the FED, the BOJ, or any other major central bank on a forward looking basis will be consistent across global central banks.

As this linear thinking is priced into global debt markets so too the global risk premium has collapsed.

Let’s think about this for a minute.

Regular readers will know I’ve been making the case for a world less coordinated, less cooperative. Last month I highlighted a number of reasons we’re likely to see a breakdown in this coordination and cooperation. If I’m right then we are experiencing a concentration of risk building up in global bond markets, while the market perception to this risk is simultaneously falling.

This presents us with a significant INCREASE in risk at a time when the pricing of that risk is falling.

It’s one or the other. The BOJ has been attempting to control quantity within their bond purchase program. They have now abandoned the idea of controlling quantity and instead are focussed on price.

Presumably the market can now stop worrying about credit risk but in doing so they have to take on currency risk. This latest move by the BOJ has shifted the risk from credit to currency. From a policy standpoint this makes perfect sense. After all, the BOJ want a weaker yen.

The market is effectively pricing in the expectation that central banks around the world will follow the BOJ’s lead. This is why correlations are approaching 1 and bonds’ price sensitivity sit at extreme levels.

This brings up a number of questions:

Certainly volatility is unlikely to be priced as low as it is today and quite possibly we’d be witnessing the beginning of the end of what has been the longest running bond bull market in recorded history.

But the question I have for you today relates to whether or not this latest policy shift by the BOJ sets us up for similar policy measures from central banks? Or if this is indeed the beginning global central bank policy divergence, the consequences of which we may well be about to experience in the not too distant future?

Is the recent BOJ policy going to be followed by the ECB and FED, or have we just witnessed the first breaking of ranks?

“We want to point out that what is also happening in capital markets is the classic ‘carry-price change trap. It happens when investors focus on the carry and pick higher-yielding assets, which drives them up so that price movements work in their favour. This goes on until there is a price correction, it is at this point everything changes and a self-reinforcing reversal takes place.” — Ray Dalio, Bridgewater Associates

Chris has founded and built several multi-million dollar businesses in the investment arena including overseeing the deployment of over $30m into Venture Capital opportunities and advising family offices internationally. Prior to this, Chris built a career at Invesco Asset Management, Lehman Brothers, JPMChase, & Robert Flemings.
MORE ARTICLES »
PrevPreviousDaniel Want On Complex Systems And Some Very Deep Thinking
NextSociety Will Accept And Condone The Coming Violence – This is HowNext