In truth it was a challenge to decide what to bring to your attention for this week’s “World Out of Whack”. A challenge made all the more daunting by the plethora of “out of whack” events cascading into my crosshairs.

On that note, feel free to send me any market observations that are seriously out of whack.

Speaking of out of whack, I’ll share two quotes with you before we head into this week’s WOW – one a blast from the past, and the other from the present. The latter serves as a poster child for the reason that Britain decided to exit the sclerotic, out of touch, undemocratic, bureaucratic, shambolic, “fustercluck” that is the European Union.

And before you call those Brits who chose to leave the EU a bunch of uneducated, xenophobic, right-wing bigots, I ask you, how would you feel being ruled by a foreign and increasingly imperialistic power with attitudes such as this? 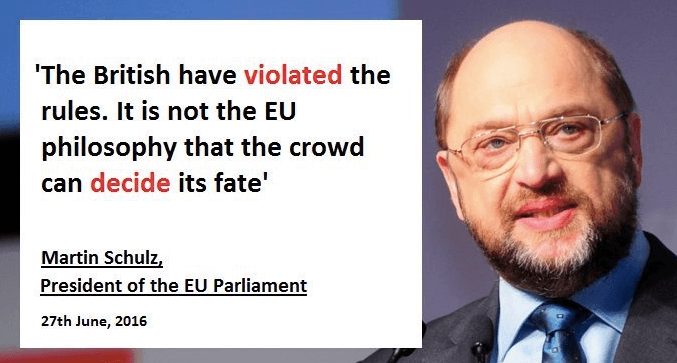 Now that the votes have been cast we can let the Brits go back to their tea and scones, and the Eurocrats can continue back-slapping each other, wasting millions banning kettles and toasters. Perhaps they’ve failed to take notice of the thousands of potential ISIS members who they’ve welcomed into the EU, and who are now blowing people up in the streets.

Our bent here is not however to opine on what should or shouldn’t happen but rather to profit from these market events. The UK leaving the lunatic asylum has sent markets into a tailspin, causing the rest of the inmates to become increasingly restless.

In all seriousness, and as I mentioned last week:

“The macro landscape is shifting underneath as at warp speed, and in today’s world capital shifts in minutes. With the Blockchain it shifts in seconds.

The politicians and central bankers are increasingly behind the curve, scrambling to catch up and each and every turn sees them exacerbating and compounding problems.

Brexit should stand as a wake up call not only to central bankers but to the political class globally.”

The markets’ knee jerk reaction is based upon linear thinking. This thinking goes that the most liquid and most stable of all investments are government bonds.

The fact that government bonds have been in a bull market lasting three and a half decades has provided investors with a false sense of security. And even though we know that the longer any bull market persists, the greater the inherent risks. The markets’ perception is – of course – just the opposite.

So let’s look at how this is playing out in real time. 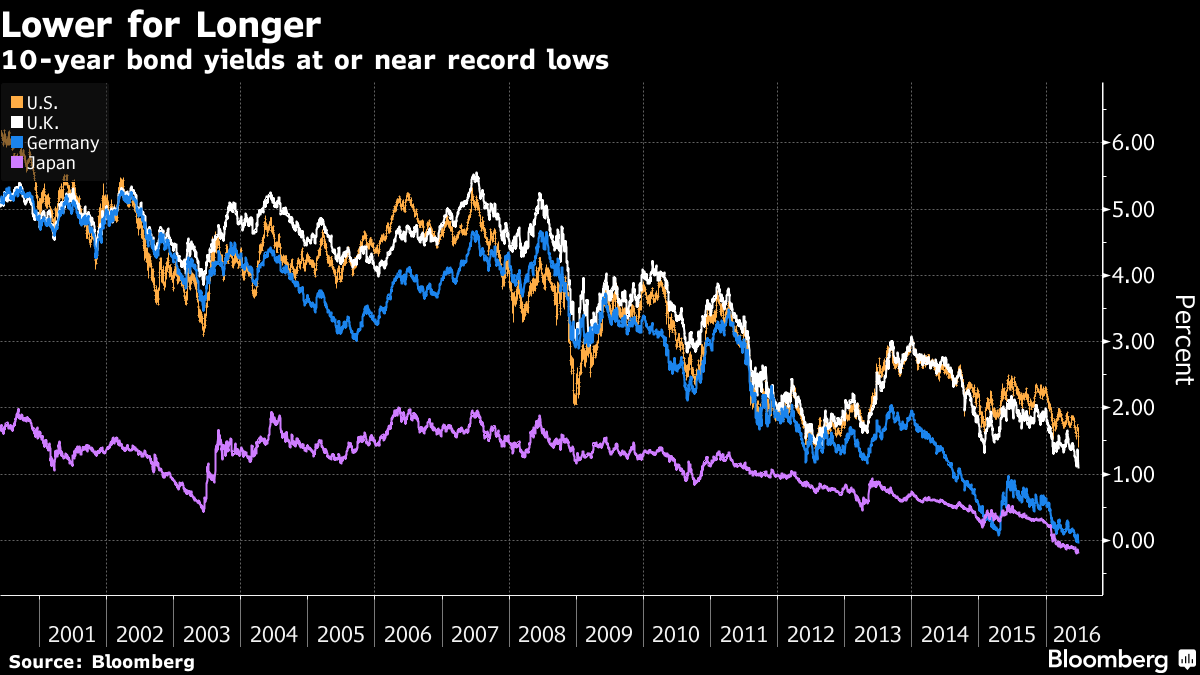 In an equally stunning move, Fitch, Moody’s, and S&P all decided it was time to put the UK in the naughty corner, adorned with a dunce hat by downgrading their debt from AAA to AA. The French will be overjoyed to see the Brits cut down to their rating level.

That the UK had a AAA rating prior to Brexit while sporting some pretty horrific numbers will, at some point in the future, likely form an entire chapter in a book written about this period in time.

Not that the rating agencies are of any use at all. But this is like having a company’s earnings falling and investors turning around wildly buying the stock. And so in this crazy world investors are rushing into UK gilts, pushing yields below 1% for the first time in its history.

Not to be left out, the Irish followed suit, pouring money into their sovereign bond market, pushing the yield to a record low. 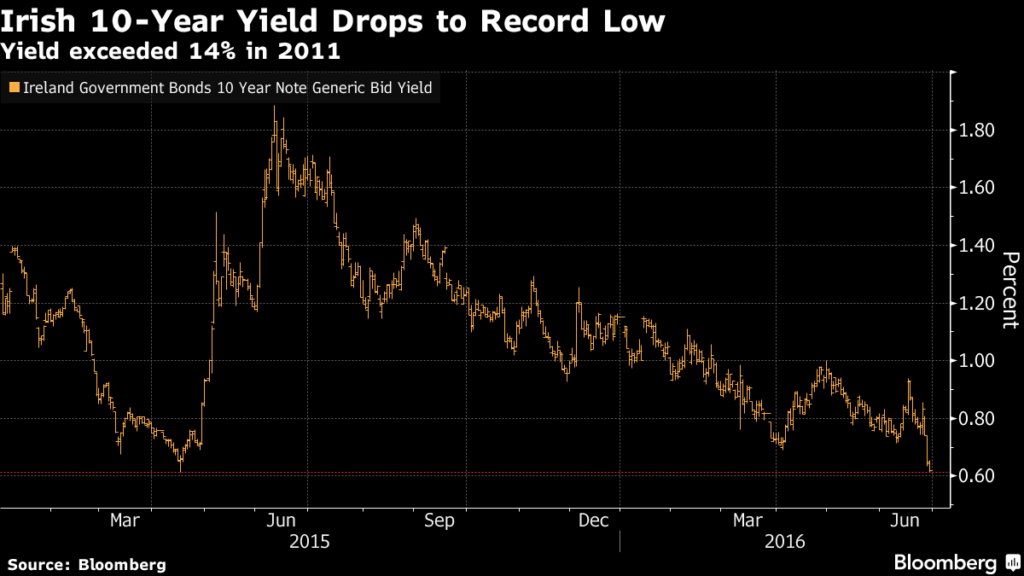 Let’s examine this for a minute, shall we?

Sovereign nations can print money to pay for their debts. That is, if those debts are issued in their own currency.

Back in the good old days investors used to be concerned that the printing of money would wipe out the purchasing power of the currency. And so governments were constrained by the markets with yields more closely reflecting risks. This is why Zimbabwe no longer has a bond market.

Today the impossible is not only possible – it’s happening. The grease that oils this is belief. A belief in Central banks.

While investors lurch violently into the “safety” of government bonds, central banks are warming the digital presses for additional stimulus. Stimulus – like anything financial has a debit and a credit column – and it certainly doesn’t sit in the credit column but as the Mad Hatter so correctly points out: it’s only a problem if you believe it is.

These are some of the headlines:

“The Bank of England offered to provide more than 250 billion pounds ($347 billion) plus “substantial” access to foreign currency to ease any squeeze in markets and Governor Mark Carney said it would consider more measures if needed.

The U.S. Federal Reserve said it was ready to provide dollar liquidity through its existing swap lines with central banks, “as necessary, to address pressures in global funding markets, which could have adverse implications for the U.S. economy”.

“The Federal Reserve is carefully monitoring developments in global financial markets, in cooperation with other central banks,” it added in a statement.

The European Central Bank said it could provide additional liquidity and would protect euro zone financial stability, while the People’s Bank of China pledged to keep the yuan basically stable and said it would maintain ample liquidity.”

If we were to read a news article stating, “Man amputates leg in bid to run faster,” we’d laugh at the absurdity. And yet today we have a deluge of such articles to choose from in the financial media.

Investors sure aren’t buying sovereign debt for the yield. They’re buying it for the certainty – or at least the perceived security – and so I’m curious to know where are you seeking security?

“The central bank is an institution of the most deadly hostility existing against the Principles and form of our Constitution. I am an Enemy to all banks discounting bills or notes for anything but Coin. If the American People allow private banks to control the issuance of their currency, first by inflation and then by deflation, the banks and corporations that will grow up around them will deprive the People of all their Property until their Children will wake up homeless on the continent their Fathers conquered.” – Thomas Jefferson

Chris has founded and built several multi-million dollar businesses in the investment arena including overseeing the deployment of over $30m into Venture Capital opportunities and advising family offices internationally. Prior to this, Chris built a career at Invesco Asset Management, Lehman Brothers, JPMChase, & Robert Flemings.
MORE ARTICLES »
PrevPreviousThe Rise Of An Investing Legend: Karl Mikael Syding
NextAnswer This! The Recent Events with BrexitNext

World Out Of Whack! (Let June Be Over Already) | ValuBit

World Out of Whack - Highlights from Our Readers' Polls

The Euro Market Is Not Working! - Capitalist Exploits

[…] risk-free rate used accelerates towards infinity, using linear progression (I’ve spoken about linear thinking in a dynamic world before). Explain to me how that works because I can’t fathom it. In such a world or with such […]