Can You Hear the Fat Lady Singing? – Part I

Raoul Pal, author of the Global Macro Investor and the co-founder of Real Vision TV, is one of my favourite thinkers and investment minds. Regrettably I’ve not met him… yet, though I’ve been fortunate enough to meet his business partner Grant Williams, who is both smart, genuine and intellectually curious.

One of the concepts Raoul discusses is “The Law of Unintended Consequence”. You can and absolutely should go watch it on Real Vision TV!

The unintended consequences of the very decisions being made right now at a macro level set the stage for some particularly catastrophic outcomes. This relates in particular to Europe and China which I’ll delve into over the next few weeks. 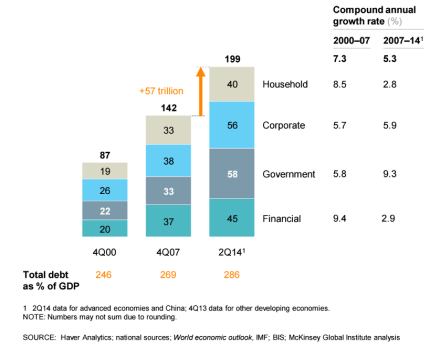 The chart above shows the incredible increase in global debt since 2000. The bond market, powered by a powerful combination of kryptonite, dilithium crystals and central bankers who have completely misread the market forces is beginning to crack around the edges.

It’s worth remembering that absolutely no nation has ever survived a debt crisis and it’s equally important to understand that global debt is now about twice the size of the ENTIRE world economy – something the world has never dealt with before.

Greece with 177% debt to GDP just came dangerously close to exiting the euro. Greeks themselves voted to regain their sovereignty but in the end Tsipras caved in to Eurocrat pressure. For the Eurocrats, an unelected group of intellectually challenged but progressively greedy group of bureaucrats, the last thing they need is citizens of Europe choosing their own outcomes. That would mean a rise of multiple fringe political groups. Greece had to be pulled into line and though it’ll inevitably and finally assist in the downfall of the entire European Union, for now it keeps an increasingly angry Europe glued together… just that little bit longer.

The release valve for a country at risk of defaulting on its debt is the currency.

Greece, however, no longer issues its own currency and as such there exists no release valve. Trapped in a deflationary spiral the economy continues to contract: 0.2% in the first quarter of this year following a 0.4% in the last quarter of 2014. When Greece joined the euro, they ceded monetary sovereignty to Brussels, and in doing so stuck a plug in its currency release valve.

Tourism, for example, makes up 18% of Greek GDP and remains relatively uncompetitive since everything is still priced in euros. If Greece threw off the shackles of the euro they’d be printing drachma with abandon, defaulting on their debts, and Germans and Brits would be turning lobster pink on their beaches while overindulging on ouzo.

As unbalanced as the pink Germans and Brits would be this would allow for a re-balancing of the market. But it isn’t going to happen and Greece will remain in deflation, except it’ll do so now with ever increasing debts. This promises to simply increase the deflationary forces in play and create a much larger problem in the near future.

These are some of the unintended consequences of the euro and the decisions being made across Europe. This is important since Greece is but one of 19 of the 28 member states officially using the euro.

Greece is fairly meaningless on its own. It accounts for just 2.5% of European GDP – about the same as Maryland in the US. Inconsequential some say.

But why Greece matters can be seen from the following chart: 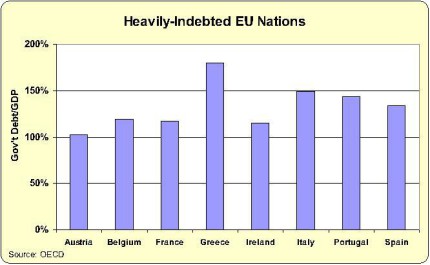 Clearly Greece has bedfellows. What happens in Greece has the potential to become a trigger point and poster child for what happens elsewhere in Europe.

Global capital flows are probably THE most important macro factor we look at.

Right now we don’t see global capital flows within the EU states quite so clearly since they’re all using the same currency. Where we do see movement is in the spread between Bunds and both other member state bonds but particularly US bonds. 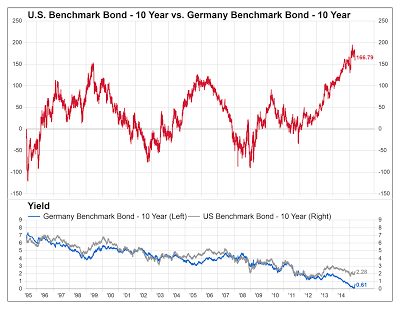 Bond holders are puking risk and they see risk particularly in European member states debt but they see risk in Europe in general and this includes Germany. This is a clear sign of stress in the system.

The Asian crisis which began in Thailand provides a text book example of how over-indebted economies can unravel with the speed of a bush fire.

February 5th, 1997, was the date that Somprasong Land, a Thai property developer, announced that it had failed to make a scheduled $3.1 million interest payment on an $80 billion Eurobond loan.  Much like the Greeks are now tied to the euro, the Thai baht was pegged to the dollar plugging the currency release valve.

Currency traders saw the anomalies much like bond traders currently see the anomalies between European countries, and began betting against the baht. The Thai central bank spent $5 billion defending the baht, reducing their currency reserves to $33 billion, before the Thai government bowed to the pressures allowing the baht to float freely. Once this took place the Thai debt bomb blew out as many debts priced in dollars became unpayable and the Baht collapsed.

Much like Europe of today, the entire Asian region had taken on unsustainable levels of debt and once Thailand had “shown the way” it didn’t take long for a wave of selling hit Malaysia, Indonesia, South Korea and Japan.

Similarly, consider that the Latam crisis in the early 80s was a direct result of the huge dollar bull market. Currency trends tend to be self-reinforcing in nature which is also why they tend to last longer than other market trends.

This is what Raoul refers to as “unintended consequences”.

As we’ve detailed in our Dollar Bull Run Report we believe we’re in a dollar bull market. The reasons for this are many though the largest by far is an unwinding of the USD carry trade, something I explained in “The Anatomy of a Carry Trade Bubble”.

Credit bubbles and fixed exchange rates never end well. We have the mechanics of both in Europe. Greece is simply a symptom of a much larger problem. Yes, it’s small but that may be missing a more important point.

Greece matters since the repercussions from what takes place in Greece increase the probability of the following happening:

We’re already in a USD bull market and any of the above will only add fuel to this fire.

Next week I’ll explain how I see this relating to China.

“Politics is tricky; it cuts both ways. Every time you make a choice, it has unintended consequences.” – Stone Gossard

I too am a big fan of Raoul.

If there was stress in the system, wouldn’t investors rush into U.S. bonds and sell German bonds? This would be a convergence of yield that would narrow the current divergence.

I believe that the debt crisis that evolved in 2007 and 2008 were just a continuation of the story of the Thailand crash. At that time Alan Greenspan and the IMF trotted about the globe spreading money to alleviate the situation. That fire still smoldered leading us to today’s problems and essentially the same “solutions”. All they can do is try to re-inflate the bubbles.

Good article . Many would agree that a higher bullion price would help to balance the books by creating highly valued liquidity that could be used as debt-free currency to support debt free trades and allow debt to be serviced and payed down in a win-win-win-win for all sides.

Here’s the silent problem as I see it. It’s commonly felt that bullion values are suppressed. If true, and I suspect they are, it’s likely because banks think in terms of liquidity first, while trade values (price) fall into line as being secondary. Movement for the sake of the economy looks to be a priority. I think we’re confronted with the real possibility that bankers may fear a non-response in terms of liquidity when bullion prices go higher. People are creatures of habit, after-all and bullion has been primarily looked upon as a store of value and/or an investment for over 45 years. It has not been looked upon as a currency for the most part. Anyone in marketing will tell you that a habit is a very difficult thing to change.

We may see the “cap” come off bullion values AFTER we see evidence of bullion based liquidity being observed in economic support. That has to be a market function based on our real-time environment, however, and cannot be a proclamation by fiat in any sort of top-down context. Until then , bankers will continue to give us “the stick” to get us to move.

We must be as wise as a serpents, yet as gentle as doves.

About Alex – i do thing the same..if Euro crack the flow will go to US..

Chris is this your thinking?

More fine work Chris……Tspiras and the Greek Parliament completely flipped after the Nuland visit – want to guess what the “threats” were? The cradle of Democracy and the clear voice of the Greek people caved to unelected bureaucrats and neo-cons representing the moneyed elite. In my opinion debt (bailouts) is being used by these groups to gain control of global assets. Sovereignty and elections matter not anymore, and countries that don’t control their own currency or try to maintain a peg and have external debts are at risk.

So since debt crises resolve in currencies, that is where I keep coming back to. We all know it is the core game yet also the greatest Ponzi. So if you are going to write about Chinese debt and currency next, please consider:

– The upcoming IMF SDR decision in November on including the CNY.
– The announcement this week that the PBOC has eased foreign purchase of Chinese government bonds.

(continued)
– All of the movement by the Chinese at the institutional and trading/reserve levels to increase global use of the RMB
– The fact that China probably holds far more physical gold than ANY other nation now
– The Chinese method of quiet, slow, strategic and immeasurably wise way of getting to where they plan to go, and setting it up for their opponents to end up HELPING them get there
– Other alternative and informed writers talking about entry to the SDR basket as a “Trojan Horse”
– The fact that the immense Chinese debt is internal and denominated in RMB
– That global capital will flow where where it feels it can earn a safe return and not be diluted by “currency manipulators”

In my opinion this all adds up to the RMB (or BRICS currency/new institutions), becoming the new global bond market and reserve currency. Hopefully it will happen gradually and peacefully, but the U.S. controlled IMF is going to have to allow that. I think that is what China wants but I fear the U.S. will not give up it’s hegemony and Petro-Dollar without a fight to the death.

5 Reasons This Country Is in For Big Trouble - Alternative Report

[…] USD bull market (as discussed here, here, and when explaining how the carry trade works), is not over yet. This is de facto […]