Can You Hear the Fat Lady Singing? – Part II: The China Connection

Greece is connected to China by the very same thing which has been connecting sex, drugs, and rock’n’roll since Bretton Woods – dollars.

Last week I shared some thoughts on the unintended consequences of actions taken in Europe and why Greece may matter as a result. There is zero chance that the actions taken will result in a stronger Europe, a stronger euro, or an economic strengthening in either Greece or the wider eurozone. Zero!

As interesting as Greece and the euro is, my attention today is on China and how China may well be forced by events taking place globally to make some far reaching choices.

Two scenarios have been widely discounted by the market with respect to China. The first is a remnimbi devaluation and the second is a hard landing for a slowing Chinese economy.

We know that the Chinese economy is slowing. We know this because Beijing tells us it’s so. Their last numbers were that the economy has slowed to their growth target of 7%. Bang on their target rate. How convenient! Now of course these numbers are rubbish, but it’s telling that they’re acknowledging a slowing economy.

As everybody now knows, the Chinese stock market lost over 30% in 3 weeks wiping $2.8 trillion off the books. The only way to lose that much money in such a rapid period of time is by getting caught by your wife having hanky panky with her best friend. 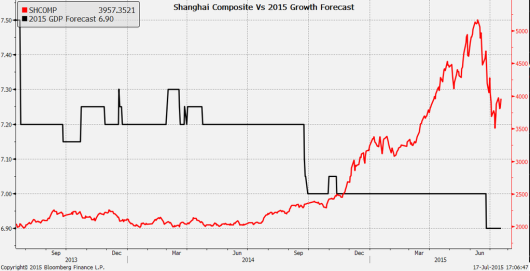 Sure, investors who bought at the top are hurting, but consider that the stock market is up roughly 80% over the last 12 months, and this is AFTER the crash. Viewed with that timeframe and taken into context this is hardly problematic.

This correction is nowhere near as big a concern as it would be if we had a similar occurrence take place in the US due to who is participating.

80 – 90% of the domestic A-share market is made up of retail investors. Novices. This was a bubble waiting to burst as retail investors flooded the market with a record 40 million new brokerage accounts created in the last year. Not only were novices entering the market but they were entering it on margin. By June of this year margin lending as a percentage of market cap ran as high as 20%. While these investors make up the majority of the market they represent a small part of the population. The free float of China’s markets is about a third of GDP, whereas in the developed world this number is over 100%. A soaring stock market and a crashing stock market will have little effect on the vast majority of Chinese households. This is unlike the developed world.

Essentially, this is a tiny portion of the market that got burned. It really needn’t be a problem unless someone does something stupid and causes unintended consequences. Sadly this is exactly what Beijing is doing.

Is China or the US the Next Greece?

Perhaps it’s simply a matter of timing and what’s racing across the news feeds but I’ve read quite a few articles about how the US and China are next after Greece. Debt levels are cited along with a host of other similarities. This is – how do I put this politely – rubbish. The US and China are NOT Greece. Even if the debt levels were the same the similarities end there. Greece cannot issue its own currency. In last week’s missive I mentioned that:

Greece, however, no longer issues its own currency and as such there exists no release valve. Trapped in a deflationary spiral the economy continues to contract: 0.2% in the first quarter of this year following a 0.4% in the last quarter of 2014. When Greece joined the euro, they ceded monetary sovereignty to Brussels, and in doing so stuck a plug in its currency release valve.

That makes Greece unique. The US, on the other hand, can print all the currency they want and pay their debts at par. Greece can’t do that. The bonds of the US, Japan and even China are not at all to be likened to the bonds of Greece. One needs to make a distinction between debt denominated in the country in questions own currency and debt denominated in some other currency.

For countries sporting high debt levels and where simultaneously those debts are foreign denominated this can become a huge problem. Just ask that crazy woman in Argentina…

The Asian crisis, which I discussed last week, is such an example whereby debts denominated in USD became unsustainable. Once the rout started a self-fulfilling trend developed whereby as the currencies in Southeast Asian nations moved lower this added multiples to the payments required on leveraged assets. A vicious unwinding of the carry trade.

What I find the most fascinating is not the correction in the Chinese stock market but the actions taken by the PBOC subsequently.

This can only be described as outright panic. Consider the following actions taken.

Aside from the fact that they are doing exactly the opposite of what should be done I find it telling that they are so willing to slash rates and devalue the yuan.

As mentioned, this needn’t be a problem if they simply let the market correct and find its equilibrium.

They haven’t done that and this is what has caught my attention more than anything else.

The Debt Component (and What This May Mean for the Yuan)

Debt is important to understand as debt is the “gasoline” added to any trade. Debt, or more correctly put, leverage amplifies gains and losses and as such is both the prozac as well as the viagra of global markets. I wrote extensively about the US carry trade in our USD Bull Run Report but will summarise an important point.

China boasts an estimated US$3 trillion borrowed and invested in various Chinese assets. A decline in those assets values materially affects investors who’ve leveraged their positions, but what really really matters is when the funding currency appreciates and those investors who are short dollars are forced to buy back their dollar positions.

Now this is where Greece and China are interconnected. Greece, as mentioned, threatens to be a poster child of Europe and the euro. This is naturally bullish for the euro in the same way that spandex pants look good on Angela Merkel – not so much!

In Europe we have intervention in the markets by Brussels. They may save Greece from introducing the drachma and devaluing it, and having German banks forced to realise losses but they can’t stop the market from devaluing the euro. Risk off is “on” and the dollar is moving higher.

In China we have Beijing intervening in the markets and we have to wonder what those US$3 trillion in the USD carry trade are invested in and what they look like right now.

Consider that globally we are seeing liquidity drying up and global capital flows moving into shorter term paper – US paper.

Two months ago I wrote about capital moving into shorter maturity paper:

Bond yields are rising sharply on the long end of the curve (long duration bonds) in favour of the short end. This is a rational move. Liquidity is crashing on all the long dated maturities and as you can see yields are breaking out. It makes perfect sense to sell the long end of the yield curve given the fundamentals. What we’re witnessing is that cash flooding into the shorter duration maturities.

When looking to understand China I believe that the probability of of a devaluation of the yuan has just risen markedly.

I would be remiss in mentioning the yen from any discussion on global capital flows. The yen goes lower. We’ve been saying that for 2 years now and I won’t rehash thoughts here. Few seem to understand that the devaluation of the yen exacerbates the probability of a Chinese hard landing and that increases the risks of a devaluation of the yuan.

A rising dollar is globally deflationary. What happens when we get deflation in China?

China absolutely cannot have deflation and will be stuck between attempting to maintain a strong currency and stimulating their economy. This threatens to rapidly become a situation where they run out of “palatable” options and the least painful will be to devalue the yuan. Both politically and economically it will be acceptable. Most importantly it will allow those in power to stay in power.

To summarize, China has:

Soros famously said to “find the premise which is false and bet against it”. When the market’s premise is false, coincidentally the pricing of assets reflects this. Looking at the futures and options markets right now the market is NOT expecting a Chinese devaluation. We think this is a mistake.

The market typically has the collective mentality of a hive, and a pool hall understanding of the global interconnectedness that drives global capital flows. At the local level it believes in the ability of central bankers to forever prop markets. It believes in imposing rules and laws to circumvent free market forces, and it believes this because it views the world through the microcosm of an extremely limited timeframe and geography, much like a field mouse in a corn field surveying its landscape, unable to see the harvesters warming up.

I will leave you with one last thought. This time from the brilliant Albert Edwards of SocGen

We have long believed that China’s growth and deflation problems will necessitate a devaluation of the renminbi in a strong dollar environment. There is mounting evidence that this process may already be underway as the currency falls to a 28-month low against the dollar…

In the current deflationary environment the Chinese authorities simply can no longer tolerate the continued appreciation of their real exchange rate caused by the dollar link.

Chris has founded and built several multi-million dollar businesses in the investment arena including overseeing the deployment of over $30m into Venture Capital opportunities and advising family offices internationally. Prior to this, Chris built a career at Invesco Asset Management, Lehman Brothers, JPMChase, & Robert Flemings.
MORE ARTICLES »
PrevPreviousCan You Hear the Fat Lady Singing? – Part I
NextCan You Hear the Fat Lady Singing? – Part IIINext

Do you know of platforms other than Saxobank which have a relatively liquid way to buy options on the RMB?

They trade on the CME but there is no volume.

Sorry Alex, Saxo is the only platform doing so and unfortunately they don’t take US citizens. If you’re an accredited email me direct for a solution otherwise there are no easy/known solutions

So maybe the Chinese hold steady until the IMF SDR decision. Then gradually liberalize and develop the BRICS (Chinese) capital markets while gradually increasing their “announced” gold reserves. See what the global flows do and what happens to the RMB. That might paint the picture of the West’s response and the need for a devaluation/deflation bomb. They are patient and incremental here, and I believe want a peaceful, diplomatic, gradual outcome.

The question to me is, will the USA allow a multi-polar world and shared reserve currency?