Can You Hear the Fat Lady Singing? – Part III

I love what I do! A recent get together filled with blonde stick insects and cologne covered chinos found me subjected to talk about “work at the office”:

“What did you do at work today?”

“Oh, nothing much, tried to look down the new girl’s top for a bit then I made some phone calls, you?”

“Oh, much the normal, searched the web for our next vacation and found I can get a Filipino bride for a grand.”

After only 10 minutes I was ready to leave.

I then received a call from a friend which snapped me back into my world and cemented my decision to leave. This friend has been extremely successful trading Asian credit and I was eager to get his perspective on emerging market debt and in particular China.

This brings me to my thoughts on emerging market currencies and debt, which I’d like to share with you today.

It all starts with the dollar bull market which we’ve discussed previously at length. As Brad mentioned earlier this year:

So while the US current account deficit continues to narrow there is absolutely going to be a shortage of USDs. There is $9 trillion of dollar denominated debt outstanding, well considering that it took a number of years to build up this debt, it is going to take more than just a few months to unwind, more likely a couple of years at least. If the US Federal Reserve were to raise rates this year it sure wouldn’t help the cause, rather it would throw accelerant on the smouldering liquidity fire!

After a brief breather, the dollar looks set to take out new highs: 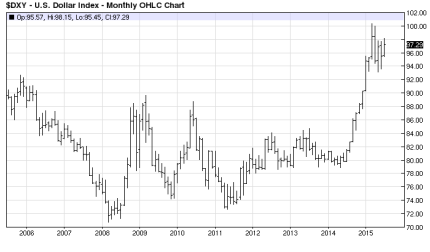 This time around the dollar looks set to take out 100 on the Dollar Index. My thoughts today lie in what this may mean for various emerging market asset classes.

Take a look at the MSCI Emerging Markets ETF: 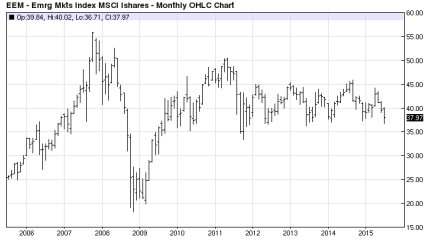 Support sits at 36 and we’re getting close!

This is a function of a stronger dollar. The larger question lies in where the leverage in emerging markets may lie, remembering that the unwinding of the carry trade will be particularly severely felt where leverage is highest.

Taking a step back for a minute and thinking about the events in Europe recently and the events we’ve just witnessed in China, it’s clear to me that central banks are out of control.

If we look back in history, it’s littered, not with successful central bank intervention, but with central bank failures. For every action there is a reaction. Everything is connected. You can’t throw a stone into a pond and not get ripples. Similarly you can’t have central banks buying assets, or slashing interest rates or any other such action, without consequences for those actions.

Last week I looked back at how the Asian crisis unfolded. That particular crisis was only 18 years ago, yet market participants seem to have forgotten the lessons. We know that central bank intervention in the face of a levered market which is unwinding can often be the precursor to an outright rout.

I then spoke about China earlier this week and how easily and quickly the Chinese central bank stepped in to attempt to stabilise the stock market. That they acted so aggressively is far more concerning to me than the actions themselves. The consequences of this are ultimately a weaker remnimbi, and a weaker remnimbi threatens to exacerbate losses for investors that have been participating in the USD carry trade.

Furthermore, as Chinese growth slows the temptation to slash interest rates and devalue the remnimbi, should it happen, puts additional pressure on competitive emerging market currencies. Countries such as Korea, Malaysia, Thailand, even India. Once again, a stronger dollar vis-à-vis these respective currencies threatens any levered capital invested in the bond markets to seek first to reduce exposures. This means selling the respective currencies and buying back dollars. This self-reinforcing cycle can quickly force margin calls and the global carry trade unwind threatens to get particularly “exciting”.

It’s not difficult to imagine a scenario where as the dollar bull run gathers steam we may well see more and more emerging markets looking like Greece.

If nothing else, it’s a heck more interesting than boring cocktail parties…

“It amazed her how much people wanted to talk at parties. And about nothing in particular.” – J.D. Robb, Holiday in Death

I thought your piece “Was Kyle Bass Wrong About Japan?” was an excellent read. Very thought provoking. I do think, however, that you’ve somehow missed how Mr. Bass intends to make his money off this arrangement, an investment which clearly depends upon a widening exchange rate between the Yen and USD rather than from any Japanese bond default. It is, in effect, a bet that the Yen will depreciate against the USD by a rate that exceeds the 0.1% he’s paying out on his shorted JGB. IMHO that sounds like a bet I’d like to take myself.

The BoJ’s debt issue (yen credit) is collateralized by Japgov debt issue. There is really no change in Japan’s purchasing power other than its relentless diminution as Japan’s ‘real economy’ gobbles resources.

At some point the decline of purchasing power will be felt in Japan; there won’t be resources to burn. There will likely be a run on Japan’s banks. If there is a run on the Bank of Japan it will not be in any position to do anything except make things worse. Perhaps the Japanese government can issue ‘Greenbacks’ but without government credibility these won’t be good for anything either.

Debts are always paid: if not by the borrower then by the lender, if not by either they are paid by everyone within the economy for generations to come. So it shall be in Japan.