Changes at the Margin – How to Prepare for a Disorderly Move

In a past life, while still in the clutches of the investment banking world, I’d made a few friends in the “trading fraternity” and visited them on a regular basis for work and social reasons. When it came to markets, opinions varied little within the group. Traders were unanimously bullish or bearish on any given market on any given day. Differences were about particular strategies, pricing, volatility and so forth, but rarely on market direction.

Nights spent socializing with the white shoe’d investment bankers themselves were no different. Conversations were typically more heated about whether Chelsea or Aston Villa were superior…not unusual for human psychology. Safety in numbers.

That being said, status quo and all…I recall one instance where the consensus had changed. Just like that, news was coming in and opinions were scattered and undecided! Only a few traders had changed their views, but the unanimous consensus was no longer there. The particular market in question flip-flopped for a few weeks before heading decisively lower. Thinking about it later and discussing it with my mentor (refer to my post, 3 Life-Changing Lessons) he mentioned something so obvious that most of us, myself included, tend to forget it, “A market needs only change at the margin.” This is never truer than when a market is levered.

The Yen has been strong for decades, and the Japanese government bond market has defied gravity while simultaneously destroying any who dared to short it. They called it the “widow-maker” trade.

But… On Monday the USD/JPY pair punched through 94 after spending the last two months blowing through numerous technical levels. Meanwhile the Nikkei is following closely on its heels making new highs. Which is to be expected.

Are there changes at the margin?

Akira Amari, Japan’s economic and fiscal policy minister recently went on record stating that he wants the Nikkei at 13,000 by end of March. Gone from the collective vocabulary are any novel concepts such as markets determining prices. Nooo, we can’t have that. Capitalism and free market economics are still amusingly paid lip service by the collective podium doughnuts, while government and their incestuous bed fellows, the central banks, blatantly fleece the sheeple. It’s the new normal!

Setting a 13,000 target on the Nikkei is certainly achievable. Hey, if Zimbabwe could have a rip roaring stock market, why not the Japanese? Rising nominal values in stocks achieved by devaluing the currency ensures that those who own stocks lose less than those who don’t but, history indicates that “real” wealth disappears.

The wealthy who own productive assets see TSHF (the shit hitting the fan) before the faceless masses, and they get out of dodge in advance. As such, they get wealthier while the rest simply bask in rising energy, housing, and food prices…inflation. So basically, most get screwed.

In the old days people used to keep warm with wool sweaters, blankets and firewood. For those Japanese citizens that long for nostalgia, fear not. The good ‘ole days are coming to a prosperous, Tokyo suburb near you.

It should have shrunk right? Wrong. The trade deficit ballooned to a record 1.63 Trillion Yen. Oops. 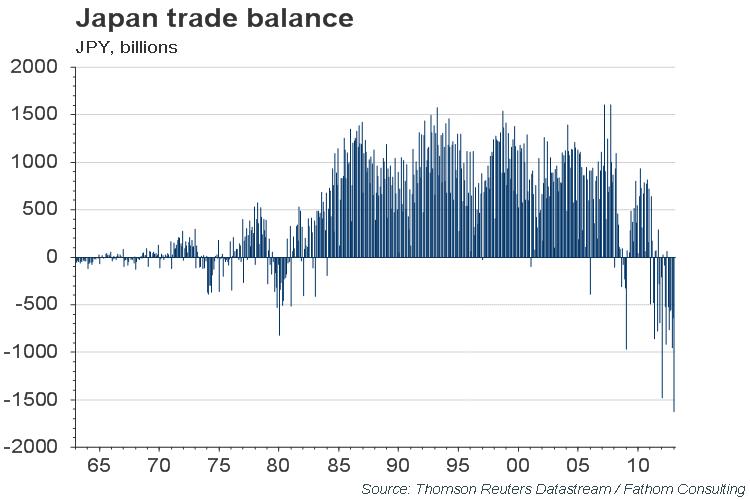 Of course we non-economist plebeians can even figure out that a weak yen means Mrs. Watanabe pays a lot more for any and all imports. This includes of course the one critical element that manages to touch every sector – ENERGY.

Abe won’t be liking that to much, nor will his constituents.

There are two distinct takeaways from this:

What I must commend Japanese policy makers for is their honesty. They’ve announced to the world their real intentions. I contrast this to the US,  where I routinely stumble across what seems to be sock puppets standing behind rostrums promising a strong dollar. Really?

My personal favourite play as I’ve mentioned numerous times is that of trading gold for Yen in the spot FX market. It certainly makes sense to play the strongest currency against the weakest. Call me simplistic if you must.

Unfortunately for US citizens this trade is a little bit more difficult to place since your kind, loving, generous government decided to forbid you from selling currency for precious metals in an FX trading account. For the rest of us we’ll happily trade away.

Sorry to our American readers…but your government is in the process of shutting down your every escape plan. Like Abe you too may as well get used to disliking gravity, because we’re only getting started in this, the raping and pillaging of “Boobus Americanus” as Doug Casey is fond of saying.

Aside from the simplicity of the trade long XAU/JPY consider that Japanese pension funds have $3.4 trillion in assets and less than 0.03% in gold. This seems about as intelligent an allocation as stuffing your retirement portfolio with garbage pail kids cards, marbles, and Franklin Mint trinkets. With saber rattling from China, competitive devaluations and a bond market on the brink of catastrophe, this is an insanely small percentage of gold to hold.

Abe and his suspected new padawan, Haruhiko Kuroda, will continue their relentless knifing of the Yen. The change at the margin is in the process of taking place right here and now. With a government balance sheet that resembles something out of a far-fetched fiction novel I think the odds of a seriously disorderly move in the Yen, and ultimately the Japanese bond market, are in the offing. In this scenario I find it difficult to imagine the yellow stuff (no, not yellow cake) failing to scream ahead.

For US citizens who are “protected” from profiting in this fashion I think it makes sense to buy some long term puts on the Yen itself. As I have mentioned previously I think the Yen will be taken out to the woodshed before the JGB market is left to crack. The BOJ will do everything in their power to keep funding the JGB’s and this will mean running printing presses red hot.

Till next week. I’m going to go have some sushi and a sake!

Chris has founded and built several multi-million dollar businesses in the investment arena including overseeing the deployment of over $30m into Venture Capital opportunities and advising family offices internationally. Prior to this, Chris built a career at Invesco Asset Management, Lehman Brothers, JPMChase, & Robert Flemings.
MORE ARTICLES »
PrevPreviousA Conversation with Harris Kupperman – Part Deux
Next007 Just Sent Me This…Next