It is predictable, though.

Trump and Kanye are both narcissists who suffer from the cult of celebrity.

Kanye even married one of the dumbest woman on planet earth. A completely insipid vapid woman who, I will remind you, is world famous despite the fact that she’s never done anything… unless you consider filming herself humping a rapper some humanity-inspiring deed.

And she’s proven ever since that fateful day that she still has yet to do anything and shows absolutely no glimmer of hope of ever doing anything. She succeeds purely by commanding attention by doing the ridiculous, the absurd, and by shocking people. The more shocking the better.

This is one of social media’s unintentional weakness.

It creates a culture that is overly susceptible to events which are utterly meaningless but shocking. These are the events which “go viral” while important events, though perhaps not as shocking, go unnoticed and aren’t shared.

Social media created a culture that is overly susceptible to events that are utterly meaningless but shocking.Click To Tweet

I just checked for “top trending” articles over the last few years, and you know what I got?

This is a world where narcissists revel.

But in this world humble is not what gains attention. In fact, you could save a life or even save many lives and it probably wont garner as much attention as Kim Kardashian photoshopping a picture of her naked butt and sticking it on a magazine.

Nope. Instead we find ourselves in a world consisting of a constant, never-ending stream of non-sequiturs mixed with a rancid concoction of self-referential garbage that washes across our screens and barely touches our minds before it shoots straight out the back of our brains at the speed of a swipe.

Consider for a minute if you were actually meeting these people and spending time with them.

Comments that would surely exclude you from being invited back to a neighbour’s barbecue get “tweeted” and “liked” and shared on Instagram, Facebook, and wherever else people hang out online.

And you know the shitty thing?

This creates a positive feedback to the very sort of people we’d kick out of our homes for being douchebags.

Consider a guy who compares himself to truly great people but is anything but:

“I’m living in the 21st century doin’ something mean to it. Do it better than anybody you ever seen do it. Screams from haters got a nice ring to it. I guess every superhero need his theme music”

“I’m like a fly Malcolm X. Buy any jeans necessary”

“I feel like I am too busy writing history to read it.”

“I will go down as the voice of this generation, of this decade, I will be the loudest voice.” 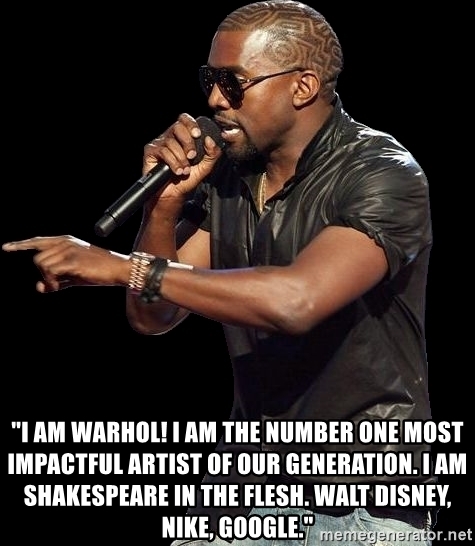 Ah, no. You’re not. You’re a narcissistic douchebag. The end!

My IQ is one of the highest — and you all know it! Please don’t feel so stupid or insecure; it’s not your fault.

I think the only difference between me and the other candidates is that I’m more honest and my women are more beautiful.

The beauty of me is that I’m very rich. 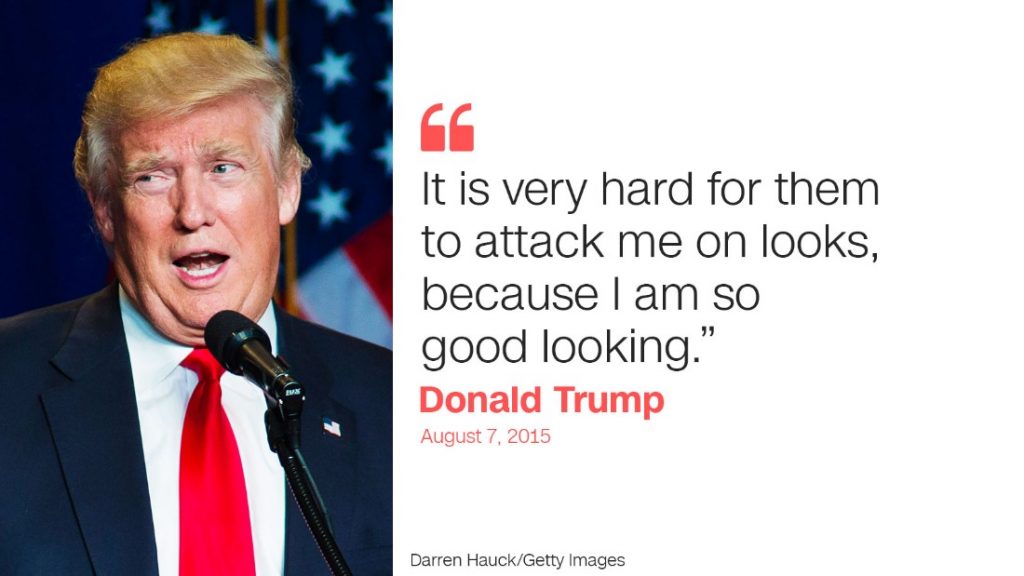 So the fact that Kanye and Trump are even known to us is in no small part due to their ability to use social media platforms to garner attention.

But that’s not the point either because if it wasn’t them it’d be some other narcissists filling their shoes.

Now, I’m fully aware that bitching about narcissists won’t get me anywhere, so let’s deal with what this all means because, between you and I, we both know that while we may ignore this absurdity, human nature isn’t about to change just because we may think it’s as crazy as a vegan steak.

Many investors have grown their wealth by investing in this phenomenon because, while Kim and Kanye have monetised this, nobody, but nobody has monetised it quite like the platforms on which all this gets carried out on.

I mention all of this because the hay days of social media are actually probably behind us.

You see, what I’ve just mentioned above is power.

The power to direct your attention today wrests largely with social media.

And while Kim and Kanye have figured out that creating drama via bite-sized meaningless content that provides them with leverage which they can monetise, it was Trump who was one of the first politicians to really excel at using it not only during his campaign but ever since.

And boy are the establishment pissed.

And that, my friend, means one thing. Regulation. 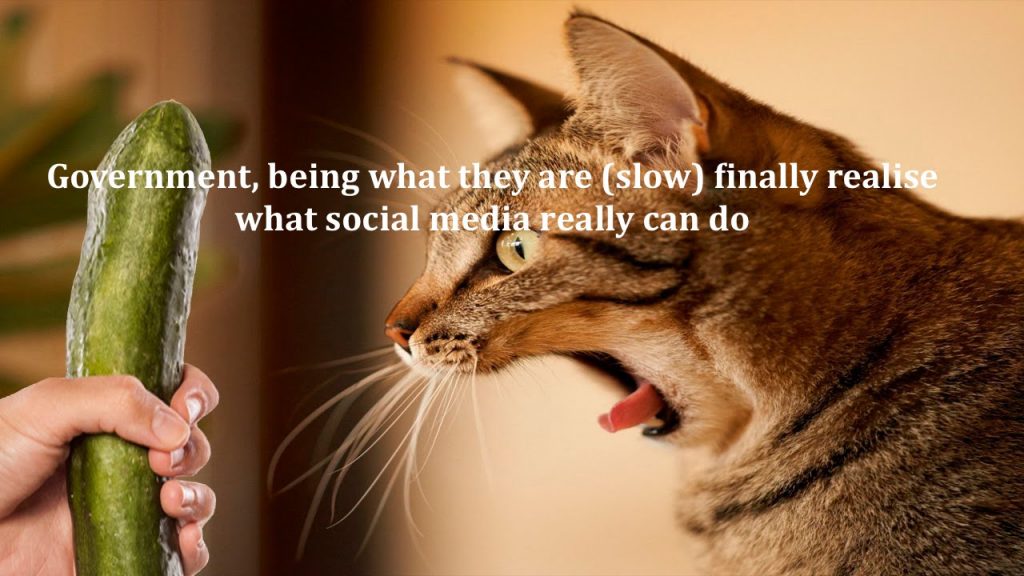 And regulation is typically a killer to innovation and growth. And that is exactly what investors have been paying multiples for. 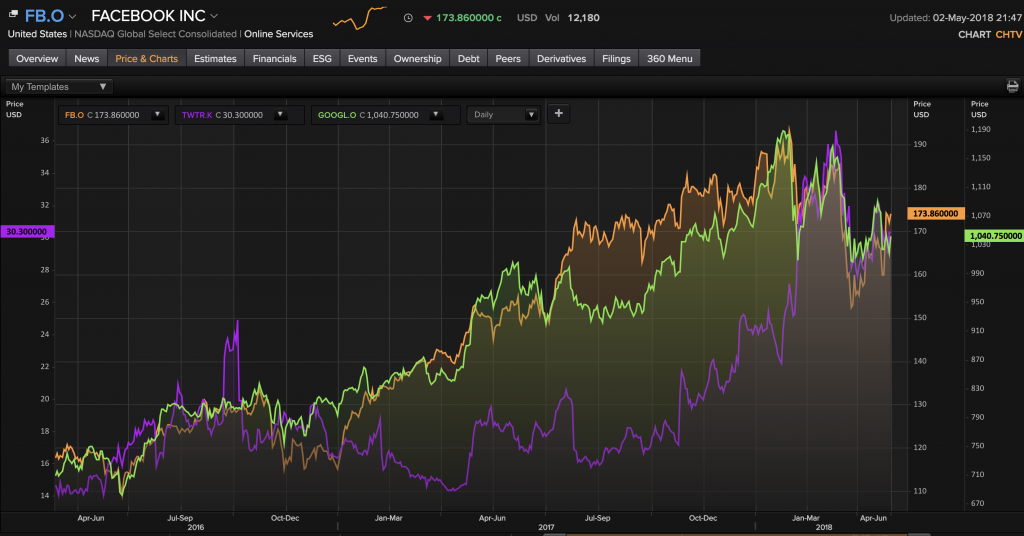 Google, of course, own Youtube, one of the most popular social media channels.

If you’re one of those folks that’s been enjoying the wonderful ride you may want to consider the rapidly changing zeitgeist out there and why it’s changed.

Because while oil is always a political commodity, when the Davos crowd decide that public opinion is too important to be left in the hands of 20-year-old kids worth billions, then social media will quickly become more regulated than a nuclear bomb testing site.

But remember this: markets enjoy freedom just as much as you and I. And just as social media first came about free from regulators and bureaucrats (who were too slow to understand any of it), the same will be true going forward.

The printing press was groundbreaking and led to the rise of traditional media, namely newspapers.

But then it became more and more centralised and of course coercible. And that in turn led to it being trusted less, which is why blogging and social media became so important.

In this world anyone can have a voice. It’s decentralised by nature.

The problem that we have with this is the ability to verify content is difficult and influencers, too, are coercible.

How do you know, for example, that I’ve not been paid by Facebook, Twitter, and Google’s competitors to write this article?

You don’t… and therein lies the problem.

A trust-less decentralised system under the control of nobody and where smart contracts are implemented to create platforms that punish poor behaviours and reward good.

It’s where, I believe, we’ll be heading and as the regulatory batons come beating down on the incumbents this will act as an accelerant to alternatives.

I am, of course, talking about blockchain-based platforms.

And no, I don’t have any favourites right now. But feel free to list any you believe are interesting in the comments section below.

Chris has founded and built several multi-million dollar businesses in the investment arena including overseeing the deployment of over $30m into Venture Capital opportunities and advising family offices internationally. Prior to this, Chris built a career at Invesco Asset Management, Lehman Brothers, JPMChase, & Robert Flemings.
MORE ARTICLES »
PrevPreviousInsider Weekly: Big Caps Are Taking It On The Chin
NextInsider Weekly: A Supply Crunch Nobody Sees ComingNext