Which means that economics and social trends don’t function independently; they feed one another in a push and pull… or yin and yang. Keep that in mind as I’ll come back to it.

This week brought us something so absurd that I quite honestly would never have thought I’d see it actually take place. At first glance I thought, no, it must be from the Onion. But it wasn’t.

MISS AMERICA ENDS SWIMSUIT COMPETITION: The organization is scrapping the swimsuit and evening wear portions of their show, saying they will no longer judge contestants based on physical appearance. The co-hosts weigh in. https://t.co/f8u2wc159S pic.twitter.com/6V9yloinA4

The social justice warriors have come a long way.

They’ve moved on from stopping us all from clubbing baby seal pups to death and killing pandas to scolding us for looking at woman’s breasts. This is saddening news for me as I like breasts very much.

Yup, political correctness and identity politics have now infiltrated the next best thing to Sunday sports: beautiful girls in bikinis.

It so turns out that it’s “discriminating” against those lasses who would love to enter beauty contests but… well, frankly they’re not that pretty and probably carrying a bit too much “wobble”.

And so instead of just being OK with the fact that we’re all different, the social justice warriors have now cemented the fact that Miss America 2018’s viewership and ratings will absolutely plummet. If I could short it, I would.

A woman called Gretchen, who is the chair of the Board of Trustees of the Miss America Organisation, tells me we’re now to have Miss America judged on “what comes out of their mouths”. No, seriously. I’m not making this isht up.

Perhaps it hasn’t occurred to these dolts that we’ve already competitions for that? They’re called intellectual debates and you can find them in any field you care for. And guess what? They’re pretty darn good. Though now that I think about it, they discriminate wholeheartedly against those who aren’t so intellectually gifted.

How the hell do you reconcile that?

Should we now hold a mathematical debate focussed on the parabolic wave curve theory, reflector equations, and wavefunctions of the electron in a hydrogen atom at different energy levels, and invite anyone to participate regardless of their understanding… just you know… to ensure it’s “inclusive”?

To understand how absurd this is, consider that our DNA quite literally dictates that we look for sexual partners that are healthy and virile.

The reason that a man will look at Scarlett Johansson and think all sorts of dirty thoughts is because she has the attributes that we, men, deem attractive. 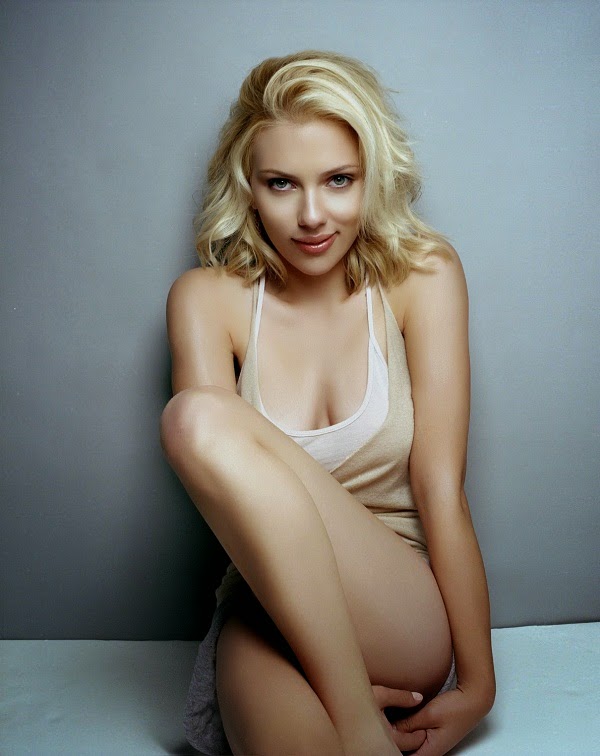 And the same goes for women, who like the look of this waaay more than overweight guys missing their front teeth. 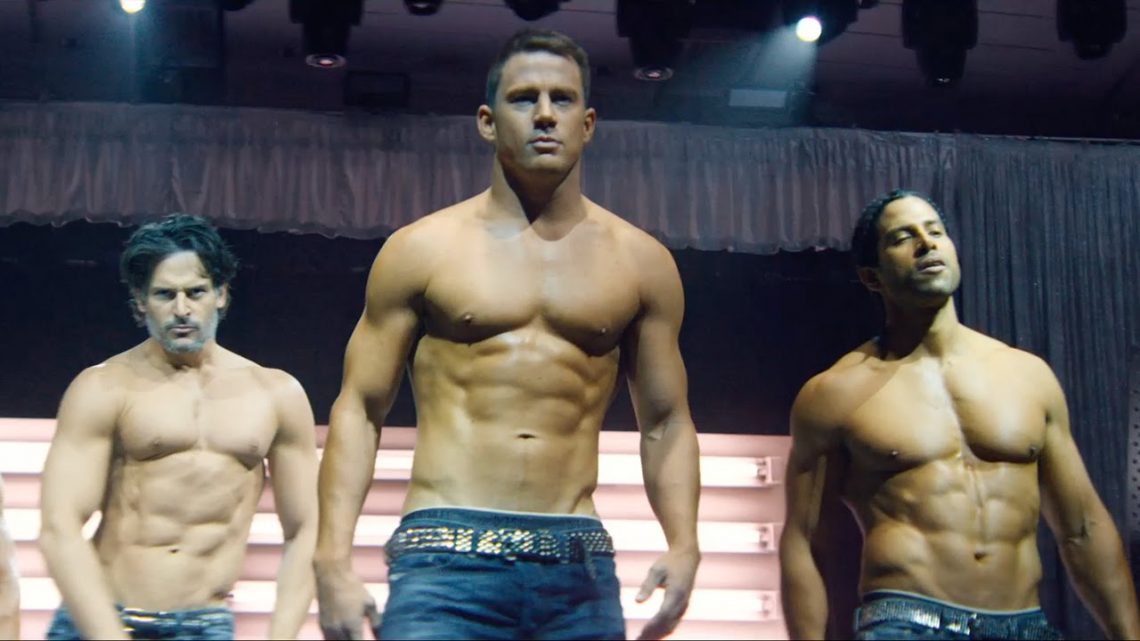 Subconsciously, our DNA runs the controls.

Studies have shown, for example, that women will overwhelmingly seek out sexual partners who have, amongst other things, high status, wealth, and who are physically and mentally fit and powerful. Richard Dawkins talks about this gene selection in The Selfish Gene — a book I highly recommend, by the way.

You may think this harsh, but it IS reality. Ignoring this is dangerous when practiced as an individual, and when practised as a society, potentially catastrophic.

But what these intellectual lightweights are actually referring to is a system where you and I are FORCED to include people. THAT is quite literally insane. Furthermore, who the hell wants to be included in anything by force when you know you’re not wanted?

Let me ask you a few questions:

If you answered yes to any of these questions, you’re a despicable moron with no sense of self worth.

At the heart of identity politics is this concept of the oppression narrative of victimisation.

If you shout loudly enough about your being a victim and blame this real (or imagined) victimisation on someone else (preferably someone with money), you gain power.

It is power by pity. And pity is the most disgusting of human traits and no person should ever want to be pitied.

This doesn’t mean that pity shouldn’t exist. Not at all.

If, for instance, a loved one dies, or you lose your job, or your car is stolen, your home damaged by fire or floods, or any damn thing untoward and nasty happens to you, it’s perfectly normal for others to feel pity for you.

But — and this is important — should this happen to you or me, the last thing we’d ever want is pity. Comfort, reassurance, friendship — all those things, absolutely. But not pity. It’s a bloody weak, horrible, subservient state and we should and do rightly despise it.

Pity, however, is the watchword of the victim. And being a victim has never been so powerful as it is today in Western society.

Pity is the watchword of the victim. And being a victim has never been so powerful as it is today in Western society.Click To Tweet

And you’d be forgiven for thinking the Miss America fustercluk is random or unusual.

It’s not, as pointed out by this article I came across. It explains how two employees in Portland were fired for closing a bakery on time and refusing service to a customer who tried to get served after closing time.

The customer, when told the shop was closed accused them of racism. Other customers had been told the same story but this customer was a victim. And in order to try to appease the mob of social justice warriors who flash mobbed the owners then fired the employees.

“They said they knew we didn’t mean anything by what we did, and that it was something we did almost nightly,” Lisa recalls, “but with everything that was happening, [they said] the only way to make things right was to let both of us go.” She says the management offered to give her a “glowing recommendation” to cheer her up.

The article goes on to describe multiple other insanities, including this.

“The following spring, Kali Wilgus and Liz Connelly were accused of culturally appropriating—that is, stealing—Mexican culture by selling burritos from their new food cart. After receiving death threats and sustained protest, they shut down their business, deleted their social media accounts, and went into hiding.”

You want to destroy society? Well, this is one surefire way of doing so.

The social justice warriors behind this are nothing more than pimps — pushing dangerous and myopic initiatives such as:

Affirmative action, which, if we’re being honest, really amounts to hiring people who couldn’t otherwise be hired for the given job.

Inclusivity, which amounts to much of the same thing. Actually, it’s the very worst thing possible because, if you think about it, the only reason you’d include someone in something… anything is because you want them there. Typically, this is the result of their skills, demeanour, and other attributes they bring to the relationship. Being forced to do so is quite different.

Equality. When you hear someone talking like this, run away. Or better yet, slap them very hard to wake them up. What they’re talking about is equality of outcome, which is NOT the same thing as equality of opportunity. They are dangerous beyond measure. The latter is what the Western world has largely built over the past 100 years, and sure it’s not perfect, but it’s a helluva lot better than the former, which is what Mao’s China and Stalin’s Russia tried.

White privilege, which attempts to categorise a specific group (which conveniently holds the wealth) and chastise that group for its contributions to the economy, and humanity and then goes on to demand that group pays for any other group that for some reason (and there are many) has or even thinks it has less.

It is Atlas Shrugged with a twist.

What these people want is to have their incompetence rewarded by those with competence. I’ll remind you of the Marxist dogma.

And it got me thinking, why is it only in the West that we see this phenomenon?

It’s certainly not taking place in Asia. You bring it up in conversation and people look at you like you’re an alien. They can’t make head or tail of it.

As a friend who’s a native to Hong Kong recently said to me:

“We don’t understand any of it. None of it. We just think people are very stupid to put up with this. We don’t talk about this sort of thing here in Asia because it’s not worth talking about”

And the answer to that question is the same answer to why we’re seeing this.

How Did This Happen?

The answer, I believe, lies in economics. 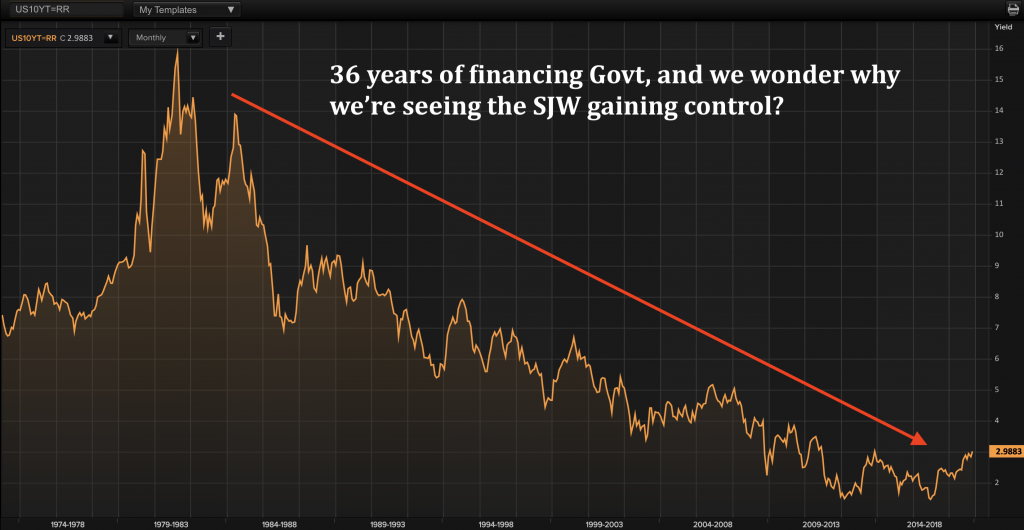 And as governments were able to keep financing at lower and lower rates, they kept promising more and more.

It’s become the tried and tested way to get elected.

This is how we find ourselves in the Western world with a populace who think it completely reasonable that the government educate their children, provide for their healthcare, and provide for them in their old age. From cradle to grave. The nanny state.

For those of us living in Western countries, fewer and fewer things in life are genuinely considered our responsibility.

These sorts of responsibilities that countries in Asia, for example, aren’t expected by the populace or necessarily provided “free” have in the West, become understandably “rights”. I wrote about rights in a few months ago, so won’t rehash that argument here.

What is fascinating is that what we’re looking at is an increase over 36 years in socialism.

And this at a time that Western governments’ balance sheets have reached breaking point. In other words, their ability to pay for all that has been promised is butt-clenchingly hopeless.

Socialism has an unintended consequence: someone has to pay the bill. And the bill is coming due.

And so, while many people (white males in particular because they’ve been singled out as “oppressors”) are, for some reason I still can’t fathom, cowering in the corner and feeling guilty instead of standing up to this radical ideology and telling social justice warriors in no uncertain terms to f*ck off, the risk is we’ll see the other side emerge. The radical right.

Now, realise that both are equally dangerous, though right now the greater threat by order of magnitude is the former.

When sufficient pressure, which will likely be both economic as well as this radical leftist ideology, is placed on any group (including white males), they’ll react as all humans do.

A reversion to tribalism in the West seems somewhat inevitable at this point and it promises some serious civil strife if left unchecked.

I wish that wasn’t the case, but that’s how I see it.

Tell me what you think in the comments and share this with those friends who have yet to wake up to the threat in front of us.

“Unfortunately, however much we may deplore something, it does not stop being true.” ― Richard Dawkins, The Selfish Gene