As a child I remember listening to adult conversations and a never ending fascination with the weather. Was it going to be sunny, raining, hot, cold? For how long? Weather forecasts may as well have been penned by J.R.R Tolkien. A work of pure fiction as they bore no resemblance to what was dished up the following day. Perhaps this was what made forecasting the weather so intriguing. Like a weekend at Vegas everyone was hanging out for the correct, ahem, lucky bet.

Today things are better. Something you realise when you find yourself watching your son’s football game, freezing your bits off as an ice cold blast stings you, and realising all too late that you’re really, really inadequately clothed. And with 40 minutes of the game remaining there’s no escape. It’s then that you pull out your phone and look at the forecast finding with some indignation that they’ve been predicting a cold front moving in since a week ago.

Thanks to satellites and better computer power, weather forecasting today is actually pretty good, and yet, with all of today’s advancements in technology, advancements which would have stunned Arthur C. Clarke himself, I find myself staring at inevitable outcomes in the financial markets and yet the “forecasts”, like the Lord of the Rings, continue to look like pure fiction.

It’s not like we have no access to reliable information. Certainly we have much more than we’ve ever had. No longer do we need to take a horse and buggy to the nearest town, trudge into the library only to pick up news reports which are already moth-eaten and months old. Nope. With a few stabs of a stubby finger or two, like a magic Ouija board, we can access real time information on the fly.

How does then an entire market fail to forecast the inevitable even as it screams at them from multiple channels?

I’m not talking about timing an event as most of everyday people are not day-trading anyway. What I’m talking about is being able to determine risk and getting some sense of where we may be at on the risk curve.

To assist in timing it helps to look at current events. Overwhelming evidence pours down on us, thanks again to technology. Television, magazines, newspapers, Twitter feeds, Google feeds, carrier pigeons. Today we’re spoiled for information.

I present to you exhibit one, a promotion in Japan before the yen fell out of bed.

Yep, you too can have naked woman in bed with you. Just buy Japanese government bonds. You can’t make this stuff up. It’s better than getting an email from a Nigerian prince.

What King Arthur is to the round table, Japan is to technology gadgets. And so it was only fitting that they tackle their demographic problem by creating a robot baby with the intention “to encourage couples to get broody and rekindle the country’s dwindling birth rate”. This one almost never cries and never soils itself. Hmm…

The reasons for the above absurdity are explained in two simple charts. 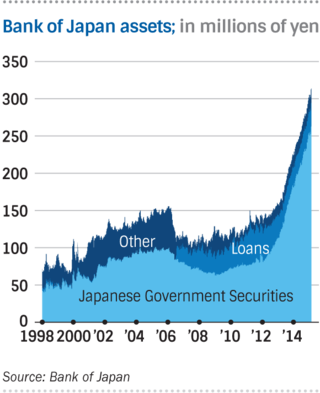 A rapidly declining tax base due to horrendous demographics, combined with a debt burden sufficient to make a grown man cry all make for an ugly and desperate picture. Trying to prop up this giant sick monster is of course insanity. At some point, like many unfortunate Fukushima residents, the bond and currency market will simply succumb to radiation sickness and die. Keeping it alive is an exercise in futility, stupidity and hilarity.

Of course this is not the first time governments have resorted to absurd marketing to finance largess, largess being seemingly the main product of government. Our grandparents will be old enough to remember these.

And if you’ve not got a baby to inspire your “patriotic” duty, well, you need to make one. And for that, you, Sir need one of these. 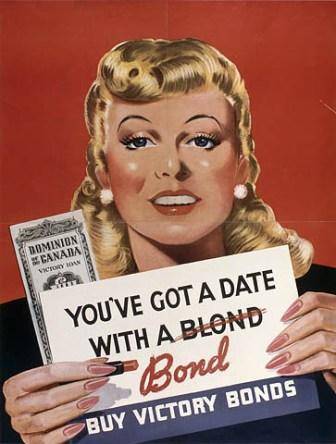 Fast forward to today and the need to finance budget gaps in much of the developed world is more likely to be dealt with, not by absurd marketing – though we’ll likely get our fare share of that too – but by legislated ownership. Expecting your pension fund to have discretion over assets is probably a mistake. It’s not like it was really your money in the first place.

This brings me to the next case: Denmark.

Speaking of making babies, it’s no secret that the socialist nightmare, otherwise known as Europe, are collectively facing a demographic time-bomb, curtailing tax revenues, and all set against a backdrop of political promises. Promises which a 5th grader math student will realise simply don’t add up.

The solution? Creating more tax payers of course. You’ve got to give it to the Danes for the most provocative advertising of them all, and being honest about the problem.

Astonishingly what is not discussed is the idea that the state wants their citizens to procreate purely in order to tax the product. How it is that citizens don’t lynch their governments for blatantly advertising such a thing is one of life’s great mysteries to me. I’m reminded of the movie the Matrix where little human babies are being used as batteries to fuel the computers.

Selling sovereign debt is right up there with selling CDOs squared on mortgages to deadbeats who’ve financed 110% of appraised property value at the height of a bubble in the asset values. Actually it’s bigger.

Consider what the word fraud means:

A lot of citizens will shortly be realising that yes, they’ve been defrauded.

Both Norway and Denmark’s demographics look much the same… scary!

As you can see, demographic decline in indebted socialist countries is problematic.

The problem is widespread. We have the Ruskies who in 2007 began a program to offer couples a day off to procreate and prizes for success. A fridge from memory. Have a baby get a free fridge. Who’s in?

South Korea, a country with demographics which make China look good even with their one child policy, sport the lowest birth rates in the developed world at 1.2 children per woman. No surprise then that they’ve implemented policies to incentivize baby making. Reduced tuition fees for state run childcare and a “family day” with the hope that Koreans will spend the day making babies.

We all know China has a serious demographic problem brought on by their one child policy which is now coming back to haunt them.

Their only salvation may be that few promises have been made and the socialist bug has ironically not made it to their shores. That however doesn’t mean that social turmoil won’t play a part as the demographic frog moves through the python.

The US sports the same familiar bulge as much of the developed world. Like a politician’s waistline, it isn’t too healthy.

Today global debt looks about as solid and stable as a bucket of jelly and the demographic headwinds will accelerate the pain. In fact, global debt which, we spent a lot of time reporting on in our special debt report, is the bed fellow of demographics and we’re rapidly approaching the reckoning day for this.

As the situation continues to worsen, since it certainly isn’t getting any better, we expect to see a number of investment opportunities arising.

Firstly, we expect to see a continued movement of capital from public to private, a trend I spoke about a few months back at one of our meet-ups held in Medellin Colombia.

Secondly, the bond markets on the periphery will begin to blow up. The emerging markets – even those that sport relatively favourable debt ratios – will experience pressures, if only due to liquidity concerns. These will be accelerated by an unwinding of the USD carry trade. This doesn’t mean the US gets a get out of jail free card. It simply means that when the sovereign bond market turns it will be the periphery which is attacked first. Ironically we expect the US bond market to be a temporary net beneficiary.

How to position? We think two things come under pressure. The currency and the bonds. In many instances it is easier to play the currency side of this than the bonds. This is especially true in a country such as Japan where unless you’re an institutional investor with a balance sheet in the hundreds of millions it becomes difficult to adequately gain exposure on a long enough time-frame that makes sense.

We recently highlighted the knock-on effects of the oil price and what this means for petrodollar countries. As many petrodollar countries are now running huge budget deficits, the flow of capital looks set to reverse course as these countries sell down investment assets in a bid to put a finger in the proverbial dyke.

We look forward to watching this show unfold.

Chris has founded and built several multi-million dollar businesses in the investment arena including overseeing the deployment of over $30m into Venture Capital opportunities and advising family offices internationally. Prior to this, Chris built a career at Invesco Asset Management, Lehman Brothers, JPMChase, & Robert Flemings.
MORE ARTICLES »
PrevPreviousLetters From a Hedge Fund Manager – Part V
NextQ&A: Is China About to Impose Capital Controls?Next