My childhood years were misspent in Southern Africa where since ancient times (1960’s), prior to gracing my parents with my presence, the educated, ambitious and most talented often left the region for markets such as the UK, Europe and to a lesser extent the US.

There were many who took advantage of ancestry laws which enabled them to spend a few years developing skills and work experience in Europe and the UK. Some returned, many never did. Opportunities more often than not were greater in the developed markets of the world for young upstarts, which I too discovered some decades later. I didn’t  hang around long enough for the ink to dry on my high school diploma before joining the Diaspora. For a kid lacking in money and a tertiary education, yet well endowed in the “unquenchable desire to take on the world” department, it was an easy decision.

In Asia where I now spend much of my time, people still have strong memories of those days (1960’s through 80’s). Back then a typical Asian youth would likely jump at an opportunity to relocate to the above mentioned places for a host of reasons, all culminating in a higher standard of living. The world is looking a whole lot different today though. Those same Asians are staying home or heading for other Asian destinations such as Singapore or Hong Kong. London, Paris, Chicago? Are you nuts? Those that do go, do so for a short time and typically return home.

There are a number of reasons why people might relocate.  Just recently I was chatting with an Uncle who lives in Christchurch, New Zealand, where many have packed up their lives and left, opting for an environment that resembles less of a warzone. That was Mother Nature at work, a variable which is unpredictable at best. What is predictable is what is happening right now elsewhere in the world though, and it has little to do with Mother Nature.

In the developed (western) countries of the world we find the crowd of looters swirling around a dead carcass (they don’t know it’s dead yet, but soon will…) continuing to drain their “fair share” from the udders of their “brothers”. While this accelerates, the market speaks like it always has spoken. European stock markets are not only a reflection of some hedge fund managers red ink and gray hairs, but represent the rapidly shifting situations for everyday Jose Sixpack and his neighbors Luigi, Jean-Pierre, and shortly Wolfgang.

The most powerful move one can make is not with one’s capital, but rather with one’s feet.

Diaspora In The Modern Times

Portugal, the country endowed with the honoree rights to being the first in the list of the PIIGS, used to be one of those countries where the Diaspora flow was inward; today… not so much.

A recent BBC article I read highlights what we are seeing on the ground – and know to be true and accelerating. The Diaspora of today is in the opposite direction. The previously wealthy nations (carcasses) are no longer places where hard work and entrepreneurship are rewarded; instead, those that provide the greatest value to society are considered as mere milk cows, or at worst attacked by mobs. We’re unlikely to see our form of democracy being implemented anytime soon, and instead we expect a continuation of the lunacy that is now taken for granted.

So how does this “outflow” begin? First you find the wealthy moving, or shifting assets to more hospitable climes.  Anyone trying to get ahead is smartly moving to countries that offer better prospects, where there talent and capital are treated more, “cough”, politely. We’re seeing it on the ground throughout Asia and South America.

Some highlights from the article:

“… And if 50 years ago young Portuguese left to seek their fortune in richer parts of Europe, today they are packing their bags for booming Brazil, Angola and Mozambique.”

“I prefer to leave everything behind – family, friends, my culture – everything than to pay for a crisis I didn’t cause.”

Something else that caught my eye, which if you have even the slightest sprinkling of entrepreneurial blood running through your veins you’ll notice why:

“When David Bernado, a Portuguese businessman based in Sao Paulo set up a Facebook page entitled Jobs for Foreigners in Brazil, it attracted 20,000 people in less than a fortnight. Most were young Portuguese aged 24 to 35, and more than half were women.”

I’ve a friend in Panama who runs a very successful enterprise as a ” business concierge” to North Americans and others setting up in Panama. It is the type of business that someone with limited capital and a mere willingness to network and create value can start quite easily (think Mongolia). As the flow of people and capital moves with accelerating pace, the opportunities for entrepreneurs and investors grow. Time is running out for both people and capital in this respect, but I digress.

We’ve previously talked about major trends when attempting to predict prosperity, and this new Diaspora trend is one that is as powerful as it is undeniable. As western governments follow the Ayn Rand playbook we see nothing stopping, or even slowing this trend anytime soon. We’re headed for a system reset folks. It’s going to be painful to some, while wildly profitable for others and probably just plain confusing for most. That’s the way the world works, always has and always will. We don’t make the rules we just play the game.

So, while clueless Krugman and his associates scan the skies for Aliens about to invade earth (where did they find this guy? Seriously!), Mark and I have made significant moves with respect to where we are physically located, and where we are investing our capital, which includes how and where we structure our businesses.

How Will You Take On The World? 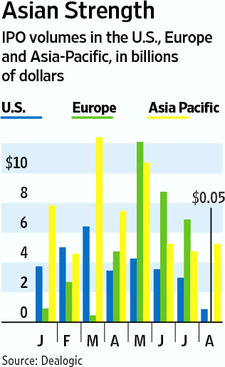 As you’re probably aware we spend a lot of time in the private equity space doing private placements and we see it more and more when looking at these deals. Companies who would have previously sought to list on a US exchange are opting for local exchanges; or, listing in places like Hong Kong, Shanghai, Singapore, and Malaysia. Liquidity in these markets is increasing, regulation is more manageable and capital more easily acquired.

We’re very excited about the opportunities we’re regularly seeing and investing in and would love to know what our readers are doing in response to this trend, with brownie points to those picking the best countries and industries to look at that will benefit from the new Diaspora. Let us know in the little box below…

“This time, like all times, is a good time, if we but know what to do with it.” – Ralph Waldo Emerson

Chris has founded and built several multi-million dollar businesses in the investment arena including overseeing the deployment of over $30m into Venture Capital opportunities and advising family offices internationally. Prior to this, Chris built a career at Invesco Asset Management, Lehman Brothers, JPMChase, & Robert Flemings.
MORE ARTICLES »
PrevPreviousIdeas are Just a Multiplier of Execution
NextWhy Not to Buy Your Own Home!Next

Santa Claus – A Drug Pusher and a Terrorist..? | Capitalist Exploits

[…] in the freezing tundra. There are unconfirmed reports the elves are actually part of a western Diaspora, escaping higher taxes and an ever-encroaching […]