Did Someone Say Deleveraging?

When discussing the global financial crisis (GFC), what is really terrifying is how well the media have pulled the wool over the eyes of well-educated people.

“Well, the banks, governments and businesses learned a hard lesson and are far more stable today.” That isn’t an exact quote, but it is something like that which I hear all too often – from people who’s businesses are in finance, banking, and investment.

No, they’re not more stable, I scream. People everywhere should be soiling their pants at the numbers.

The world is still leveraging up. After the 2008 crisis it didn’t take long to get right back on that particular wagon and continue this absurd path. Just because the wagon’s wheels fell off seemed no reason to stop using it – just get a new set of wheels. Contrary to what seems to be widely held views, global deleveraging has yet to start. The debt ratio continues rising to all-time highs.

Japan, a country we’ve spoken about in these pages at length, is just simply off the charts. Japan is that wild guy at college who you were convinced would kill himself. Every time you bumped into him it was something new and more terrifying. He’s still around and his death defying stunts are more daring than ever. Right now he’s at the controls of a runaway train, and for those of you who’ve never been on a train, it runs on tracks which ostensibly means it can’t turn. On the tracks ahead are 127 million Japanese citizens. Remember, he can’t turn so he’s just going to keep going until his windscreen is all meaty and red. They are calling it Abenomics. It’s insane.

Staying on that side of the globe for a minute we have China. China has become a driving force of leverage post 2008. Mark Hart, the legendary but secretive hedge fund manager behind Corriente Advisors believes that China may well be the next major problem. Even more terrifying than breathing Beijing air is the speed of this leveraging process in China.

Take a look at the below chart on corporate debt as a % of GDP. 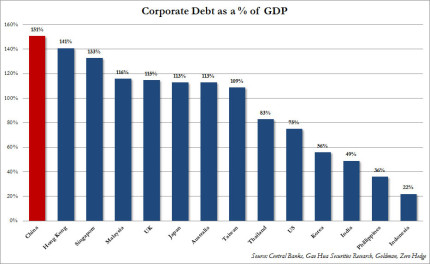 Now, I’ll concede that in the main Anglo Saxon economies – you know, where “round eyes” live – the corporate, household and financial sectors have reduced debt levels, though this has come at the expense of the government sector. A quick view of the chart below provides ample fodder for underwear soiling. 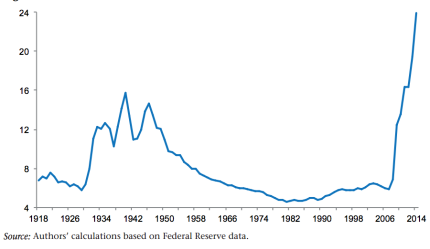 Federal Reserve balance sheet as a % of GDP

Here we sit six years on from the beginning of the GFC in the advanced economies, and despite all the trouble that crisis inflicted on the global economy, the world is not yet deleveraging. Indeed, not only is the world NOT deleveraging but it has kept increasing leverage at an unabated pace and it’s breaking new highs – up 38 percentage points of GDP since 2008 to 212%! 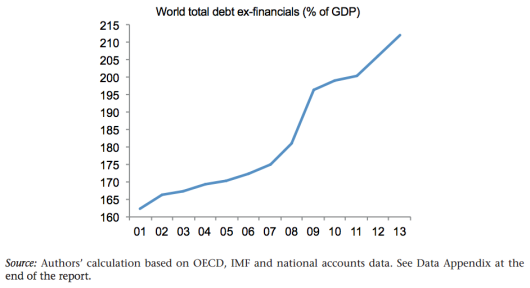 All of this should be of absolutely no concern to you if you’re unfathomably rich or perhaps living on a desert island, with monkeys for companionship. For the rest of us it’s going to affect us one way or another over the coming decade.

PS: I’ll be meeting up with a few friends in Hong Kong on the evening of the 17th. If any readers are in the area and would like to join me please send me a message through the contact box and I’ll let you know the details.

“When an accident is waiting to happen, it eventually does. When countries become too deeply indebted, they are headed for trouble. When debt-fueled asset price explosions seem too good to be true, they probably are.” – Carmen M. Reinhart and Kenneth Rogoff, This Time is Different

Chris has founded and built several multi-million dollar businesses in the investment arena including overseeing the deployment of over $30m into Venture Capital opportunities and advising family offices internationally. Prior to this, Chris built a career at Invesco Asset Management, Lehman Brothers, JPMChase, & Robert Flemings.
MORE ARTICLES »
PrevPreviousReplace These People with an App Already
NextCrowdfunding – Disruptive Finance Goes GlobalNext