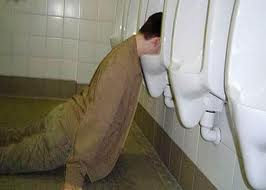 When they inevitably spend a day, thankfully still in the distant future, throwing up violently, it will be while they’re stuck in some foul-smelling hostel in Bangladesh, where patrons have to trudge down the hallway to the communal toilets (something which would make anyone who isn’t already stoned wish they were).

Most importantly, they will be throwing up from a decent dose of dysentery, and not from binge drinking to much at a college party with snotty brats from upper-middle-class, “respectable” families.

The latter teaches poor habits while the former teaches a genuine appreciation for our world, and teaches one how to handle oneself under stress. I’ll bet they don’t offer that class at Harvard.

Side note: I’ve just had a business idea for a college kid – a morning after service. Offer to clean up the mess, provide morning coffee, re-hydration and a large breakfast of pancakes and greasy bacon. Total cost is probably $10 per patron. Sell it for $100 per patron, but I digress.

Universities, or at least those buildings that people call universities, are bad at preparing you for not only the world that exists, but importantly for the world that will exist moving forward. They’re dinosaurs, antiques… nice to look at but offering very little actual utility.

Being stuck with people of the same age demographic, similar cultural upbringing, and similar political and social thinking is simply destructive to intelligent, broad critical thinking. Universities might expand ones mind, but only if you’re used to spending your free time watching American Idol, The “X” Factor, playing Angry Birds or just don’t get out much. Otherwise they encourage myopia.

As a result it’s difficult for the average college kid to develop the resilience to come up with ideas that won’t be universally accepted by their peers. Equally as important though, it’s difficult to formulate ideas outside of the narrow spectrum of a university and its inhabitants.

While my kids are travelling the world looking at what is taking place and figuring out how they can add value, they will learn some critical skills.

Why would I do this?

Because they’ll learn to hunt and kill in order to survive and thrive. Funny enough, not unlike the real world.

Possibly most important is that they’ll learn that the world they thought they knew isn’t the centre of the universe, and much of what they thought they knew will need to be carefully rethought and challenged. (I’ve begun this process at an early age with my children, but when they go it alone there will still be surprises for them…)

Intellectually they will hit their 20’s with more critical thinking ability than a university student whose brainwashed psyche struggles to move past the bartenders breasts, or what the trendiest fashions to wear on a night out with the ladies might be.

I’m also going to do it because they will have way more fun – real fun. Good for the soul and spirit fun, and adventure… lots of adventure!

So, how are they going to learn all they need to know without the university drivel?

Learning on the ground from a young age is more valuable than any university education ever will be, no matter how good. Be that as it may, I’m certainly not against reading the classics, imbibing in literature or listening to intelligent, thought provoking people.

If you want a Harvard, Cambridge or Yale degree it’s actually available, and almost entirely free. You’ll be able to find many of the world’s top lecturers, in any field you desire, on the Web for nada, zero… sans maybe the cost of a few kilobytes or megabytes. Download their lectures and view them repeatedly, take notes, critique them with your peers who may well be sitting on the other side of the world. Geography and caste matter not in cyberspace.

We live in an open source world. We might as well embrace it because it’s revolutionizing our reality in real-time. The options are open to us. Paying hundreds of thousands of dollars to sit around with other kids reading books obtainable for next to nothing on Amazon.com, or in a half decent library impresses me as beyond stupid.

It’s already happening at places like the Khan Academy, and the trend is not a fickle one. Home schooling with resources such as this is, in our opinion, far superior to what passes for education in most of the western world these days.

We believe so strongly in a “real world” education that we are already hard at work de-programming a young 21 year old (the first in the lineup to start university) and instilling our version of the truth in his still supple young mind. He is heeding our advice and taking the next semester off (and possibly much longer) to blaze a path to Mongolia to launch a small business that we’re backing him in.

He’s leaving his family, friends, and country at an age when most of his peers are content to spend their time on far less important pursuits. But he’s also making a choice to forego a costly institutional education, which will saddle  him with a decade or more of debt repayment, to see how it’s really done.

Speaking of the “cost” of education, later this week I’ll show you something that a subscriber sent to me. It’s an excellent visual depiction of the student loan cycle (or should we say the student loan “fraud”). It’s just another reason to forego university and get your experience in the real world. The system is ridiculously dangerous, and in our opinion is resulting in the “enslavement” of an entire generation of young people.

“Most people go to college today because they actually think someone is going to give them an education, when in fact, an education is something you have to give yourself.” – Doug Casey (Speculator, best-selling author and Capitalistexploits.com subscriber)