First up, this beauty received by one of the crew here at HMS Capitalist Exploits:

Speaking of ICOs, last week something amazing, breathtaking, and revolutionary happened. We had another ICO… the very first of its kind.

Pundits said it was an unveiling of the Tesla semi truck, but we now all know it was actually a thinly veiled capital raise.

Like many good things in life, this also began with foreplay.

Customers and shareholders are like ovens – they need to be warmed up first.

So a few weeks before launching the ICO, the oven was dialled up:

Amazingly, I woke up this morning and, though having watched the unveiling, I looked around me and couldn’t notice anything different (though my dog had this strange look in his eyes).

My mind was surprisingly still in my skull and had not been sent into an alternate dimension, which was disappointing as I was quite excited by the prospects of that.

Anyway so once the engine was warmed, we were treated to the de-robing of this. 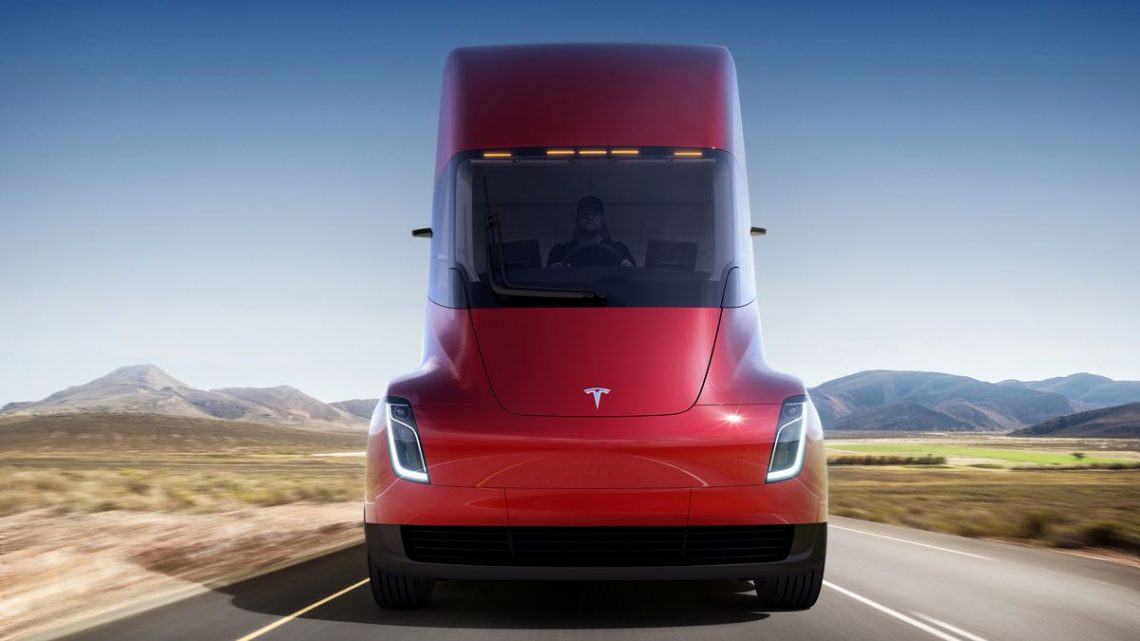 I thought at first I’d missed it. Then I watched it again. And no, I hadn’t.

There was zero explanation of how Tesla would get all the dough to build this creature, where it would build it, and how (given the competition all have existing production plants, positive cashflows, dough in their treasuries, and access to credit markets) Tesla miraculously thinks that by the time it gets there it will have all of these things as well as the technology (that does not yet exist) to pull it off.

But then my nerves were calmed when they offered a warranty on the product. Wait, what? A warranty BEFORE they have a product? Killer!

I guess there’s a first time for everything.

But that wasn’t to be all.

No, then came the real showstopper as Elon went a step further in promoting Tesla. The fastest sports car in the world. And it may even just fly. 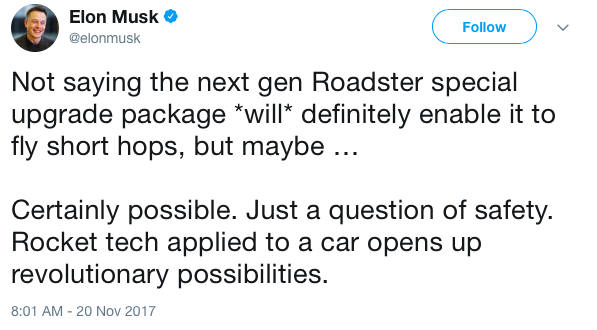 The kid in me did backflips. I sooo want a car that flies. Don’t you?

But then I remembered that there was a time when I really wanted the Easter bunny to be real, too.

Now, being older and wiser, I realise that rabbits screw up your lawn and chocolates make you fat, and I want nothing to do with either of them.

What I would like to know is how they found the time to muck around developing both a sports car and a giant truck when they can’t get a little Model 3 out?

Maybe that’s just me being a grouch. Heck, what do I know about cars? Mine’s 5 years old and smells of kids sweaty football socks which are buried in the back there somewhere.

Thankfully, I didn’t have to wait too long to figure out how they intend to fund some of this:

Now, when I saw this I’ll admit to having made the sort of noise a cat would make if fed through a mangle.

I realised then that Tesla was trying to pull off an ICO.

You see, the thing with 99% of ICOs is they’re kinda like the deals on Kickstarter, which means that you don’t actually get anything. It’s more like a donation… or part of a rewards points system. You know, like your air points where you get to trade them for a flight to Greece for a dirty weekend away or to upgrade your flight to first class so you can sit next to all the folks who eat lobsters in their bathrobes.

This works spectacularly well for anyone uneducated in investment markets. And that, my friends, is perfect for Tesla. Because you know what?

That’s about 90% of the population.

For the other 10%, here are some things to consider.

I’ll gladly admit to not really knowing a lot about cars. I like them very much as long as they take me where I want to go and do all the cool things that modern cars do.

But try explain to me about all the ins and outs of the bits inside and my brain does that man thing – it stops working and starts thinking about sex.

But what I do know a thing or two about is numbers and markets. And frankly, when Musk starts talking about these things he may as well be speaking Nepalese and explaining how to cook a yak stew because it’s all complete gibberish.

Tesla by the Colours

Last week when we were staring at Margot Robbie (don’t tell me you didn’t stare), and we said:

It was overconfidence that led the pointy-shoed suits on Wall Street to package subprime mortgages up, believing that a pile of isht when added to other piles of isht through the magic of diversification turns isht into non isht.

Like Margot explained in the Big Short (and bear with me as I’m extrapolating here): If we use Wall Street logic, you take the colour red and add it to more red… much more… you can get green.

So let’s run through Tesla by the colours, and then after that we’ll run through it by the numbers. Sounds fair?

Tesla by the Numbers

Let’s take Q3 cashflow and toss in interest charges for 2017 (which is only fair — after all, someone has to pay them).

With that we realise that Tesla burned through about US$1.7bn or about US$500m a month.

Now, let’s be super conservative and say capital expenditures remain at 2017 levels, which is absurd and impossible given the new initial car offering and that semi truck, too (it’ll be far higher).

Anyway, let’s give it to them.

That’ll put US$250m into Tesla’s treasury, which will buy them less than 3 weeks. Killer!

I’m going to go out on a limb here and say that in the first quarter of 2018 Tesla’s going to lose US$1bn. Crazy, I know. How long for? It’ll go on until it doesn’t.

And here’s something to think about… 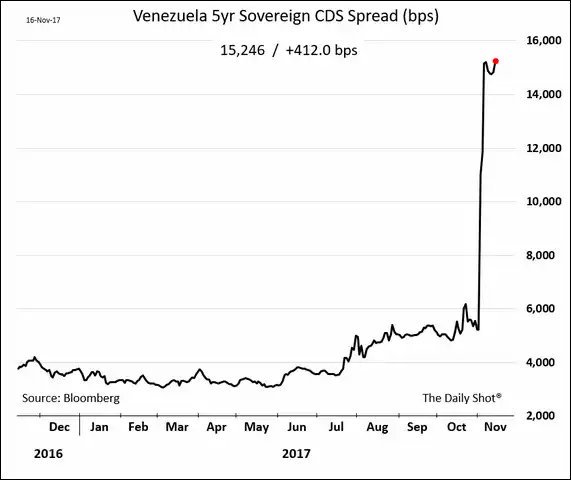 You may ask, why Chris are you posting this in an article about Tesla?

Well, Venezuela — like Tesla — made promises it couldn’t keep.

What I’d really like to know from you today is this:

“If you wouldn’t be short a multi-billion-dollar loss-making enterprise in a cyclical business, with a leveraged balance sheet, questionable accounting, every executive leaving, run by a CEO with a questionable relationship with the truth, what would you be short? It sort of ticks all the boxes.” — Jim Chanos

Chris has founded and built several multi-million dollar businesses in the investment arena including overseeing the deployment of over $30m into Venture Capital opportunities and advising family offices internationally. Prior to this, Chris built a career at Invesco Asset Management, Lehman Brothers, JPMChase, & Robert Flemings.
MORE ARTICLES »
PrevPreviousBrace Yourself, This Market Is About To Skyrocket
NextInsider Weekly: Take Note Of This Technological BreakthroughNext