The Euro Market Is Not Working!

Today we discuss the largest wholesale funding market in the world, the eurodollar market, and how its “normal” form of functioning has dramatically changed, causing all manner of problems in the global economy.

In last week’s post we discussed shadow banking at its finest: the eurodollar market. It was the precursor to this article and so if you’ve not read it then it’ll be useful to do so here before reading this article.

In that article I mentioned that the eurodollar financing market has never returned to the levels prior to the GFC. Let’s first retrace the steps to understand what exactly has happened since the central banks all “saved us” from annihilation. In doing so I hope to lay the foundation for my belief as to why it is that some 8 years on the world is still mired in lacklustre growth, rising inequality, and this prolonged recession, which never seems to want to go away.

Everyone senses that things have changed, they’re different, out of sync… wrong. But why?

Central bank responses to the GFC were that the federal funds target was at the zero lower bound as the Fed attempted to provide stimulus through unsterilized purchases of Treasury and mortgage-backed securities (MBS), or what is popularly referred to as quantitative easing (QE). 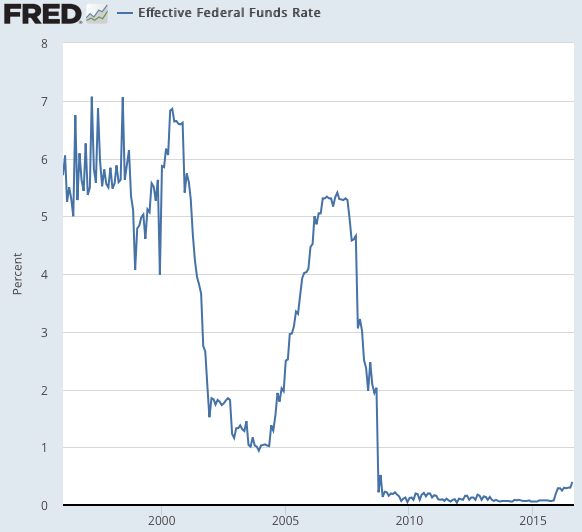 Between 2009 and 2014, the Fed threw three rounds of QE at the global economic wall praying that at least one would stick. And so, like trying to carve a pineapple with a plastic spoon, failing, and then attacking the pineapple with yet more plastic spoons, the Fed took something NOT working to be evidence that quantity and size is the problem rather than strategy. Genius.

The third round of QE was completed in October 2014 at which point the Fed’s balance sheet was $4.5 trillion — five times its pre-crisis size. Quite some price to pay, and for what? 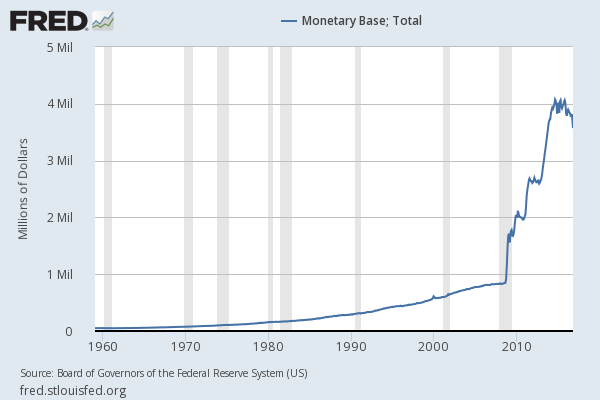 The Fed weren’t alone in this. Our sake-drinking friends were at it too, giving new meaning to the phrase “big in Japan”, as were the Europeans and Brits. All in all, quite simply unprecedented and extremely unorthodox coordinated central bank actions. 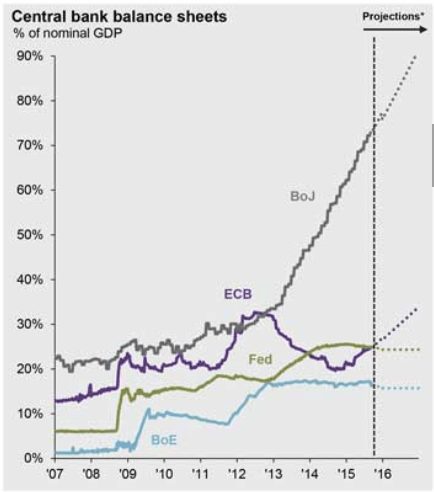 All this intervention by central banks was designed to get the credit markets cranking again. Lower interest rates being the primary mechanism and central bank balance sheets bearing the burden.

Let me just say that for anyone who’s spent some time understanding how an economy functions, you’ll realise that shifting rates to negative is bat shit crazy. If you think about how the capitalist system operates, you realise that we need a complete overhaul of education systems in the developed world, if all it does is puke up the kind of intellect currently running central banks.

Ask any money manager what the risk-free discount rate should be and they don’t have an answer for you. Risk managers, you know those guys managing your pension funds, the insurance portfolios, mutual funds, and quite frankly every asset manager on earth with just a fraction of a clue, has to use some rate in whatever model he’s constructed. Since it’s now so difficult to know what the “real” rate is, asset prices are wildly skewed as a consequence.

Central banks, in trying to stimulate the global economy, created an environment where increasingly the risk-free rate approaches 0%. I’ve seen some models whereby the risk-free rate used accelerates towards infinity, using linear progression (I’ve spoken about linear thinking in a dynamic world before). Explain to me how that works because I can’t fathom it. In such a world or with such a theory risk disappears altogether. Nirvana!

Although QE at the Fed has since ended, they announced the intention to maintain the balance sheet at its current level for the time being. In September 2014, the Fed announced a framework for normalizing monetary policy after QE, explaining that they would raise interest rates despite a large balance sheet.

The strategy was to mainly raise the rate of interest paid to banks on reserves and by engaging in reverse repurchase agreements (reverse repos). Quite a few money managers figured they were calling the markets’ bluff.

So we’re all familiar with the monetary policies but let me bring this back to the eurodollar market.

Some of the most notable signs that the interbank lending market, of which eurodollars plays the most significant part, isn’t functioning correctly is seen in the repo market.

So a dealer or any holder of a government security such as T-bills sells them to a lender and agrees to repurchase them at an agreed price at a future date. In this respect it’s a simple forward rate agreement.  They are therefore really attractive for 2 main reasons:

The problem, and this was highlighted to me by Jeff Snider at Alhambra Investment Partners (BTW, Jeff’s work is excellent) is that we’ve had repeated repo fails since 2014.

Essentially what we have is the market refusing securities as collateral. Hmmm…

Now, as a quick aside. Other collateral enters the system as reverse repos.

Now when any of the underlying collateral fails as happened in 2007 and 2008 when mortgage bonds were rejected as collateral the knock-on effect is felt in the repo market and liquidity dries up in a hurry.

Generally speaking in any crisis it’s reasonable to expect particular assets to be rejected as collateral as those assets are being re-priced by the market. After all, if you’re unsure of what the price of any asset used as collateral is going to be tomorrow morning, then you’re a few sandwiches short of a picnic if you enter into any agreement to repurchase the asset again without figuring out how much risk you’re taking on the ultimate market price of the asset.

Now, to be clear there are two reasons that the repo market can fail:

I believe that a combination of the two are at play. Government securities are still considered high-quality collateral but other markets clearly are not. Junk bonds, mortgage-backed securities, corporate paper, and so forth are in question.

So we’ve had repeated repo fails. This means that funding as it should function isn’t taking place which is contractionary despite all the easing central banks have been doing, and this repudiation of existing collateral is highly contractionary. This contraction and failure in repos coincided with the USD breaking out of it’s decade long bear market in late 2014 which I spoke about here and here.

To be clear, at the time I wasn’t aware of repo fails, though we spotted the asymmetry in this market and identified interbank lending constraints, which helped in determining the dollar shortage ahead of its subsequent rise – bully for us.

It was only much later, recently actually, that I began to pick up additional pieces of this puzzle, which we’re discussing now. I believe they provide us with a much more granular and complete picture as to what’s going on. Important if we are to determine outcomes ahead of time and make some dough. In any case, let’s move on…

Monetary Expansion But Where’s the Growth?

The majority of the world’s assets and businesses over the last couple of decades have been created and sustained only by a falling interest rate environment. Without it many wouldn’t exist and without it many others would have subsequently been created. But they haven’t and this is the real tragedy.

When central banks hold the cost of capital at zero, or at levels inconsistent with market forces, this induces mal-investment in the system. And the longer this environment persists the further this mal-investment is promoted.

I think most people understand that but what this translates into is severe deterioration in productivity growth. After all, why build a productive business when you are forced to compete with unproductive competitors who are supported by mal-investment?

So you get this stagnant economy as a result, and because the incentives are no longer market driven but policy driven, the return on capital naturally diminishes. This is quite dangerous and leads to the political upheaval I’ve been talking about and the breakdown in social contracts and much of the problems I discussed in the breakdown in Europe.

And so what we have is a global banking system that’s decided it’s no longer in its interest to provide the funding mechanism to the world. And this isn’t some cabal of cigar-smoking, pointy-shoed banker bastards. This is a structural decision made by tens of thousands of market participants globally. There is a fundamental reason for this and that reason is collateral shortage – a shortage actually created by central banks and their policies.

Since collateral is a complex topic in itself, I’ll bring out the axe and attempt to chop it into pieces for you next week so make sure you’re on our mailing list so you don’t miss it.

Oh, and I have a real treat for subscribers on Monday and Tuesday as I recorded one of the many conversations I have with the smartest investors on this ball of dirt. This one with Mark Yusko of Morgan Creek Capital who, if you’re not following, you are indeed doing yourself a disservice.

“Our analysis leads us to believe that recovery is only sound if it does come from itself. For any revival which is merely due to artificial stimulus leaves part of the work of depression undone and adds, to an undigested remnant of maladjustments, new maladjustments of its own.”  — Joseph Schumpeter

Chris has founded and built several multi-million dollar businesses in the investment arena including overseeing the deployment of over $30m into Venture Capital opportunities and advising family offices internationally. Prior to this, Chris built a career at Invesco Asset Management, Lehman Brothers, JPMChase, & Robert Flemings.
MORE ARTICLES »
PrevPreviousWorld Out Of Whack: Time To Buy The Mexican Crash?
NextMark Yusko – A Conversation Between Capitalists (Part 1)Next

[…] This article is a follow on from two previous articles discussing the eurodollar system. Part one can be found here,, and the next here. […]

[…] This article is a follow on from two previous articles discussing the eurodollar system. Part one can be found here,, and the next here. […]

[…] This article is a follow on from two previous articles discussing the eurodollar system. Part one can be found here, and the following one here. […]

Pressures Mount On Aussie Banks | It's Not The Tea Party

[…] or re-reading my articles on eurodollars. The first part deals with the eurodollar market, the second part with why the Eurodollar market is not functioning properly, and in the third part, entitled […]

Washington Isn’t Vegetarian Either (No, Really) - Financial news in realttime from every major financial news portal - Trading Tools and Community

Washington Isn’t Vegetarian Either (No, Really) | It's Not The Tea Party

[…] This article is a follow on from two previous articles discussing the eurodollar system. Part one can be found here, and the following one here. […]

Mexico On Sale (And How Best To Play It) | Capitalist Exploits

[…] urge you to drink lots of coffee and read it as well as the subsequent two articles: “The Eurodollar Market: It’s Not Working” and “Collateral Damage”, in which I explained my thesis as to why we’ve been […]