Greece – What Comes to Mind?

I warn you… I’ll get hate mail for this. I am a bad person.

Perhaps, I spent too much time in European cities because Athens and Greece in particular always failed to impress me.

And then there’s the food. It’s terrible. Leaves or cheese, sometimes both, double soaked in oil pretty much sums it up.

If you’re not into crumbling buildings, they offer the islands, which are quite nice, laid back, and fun, what with those little hilltop villages you see in the postcards, riddled with cobbled streets and fat ladies smiling at you through missing teeth.

Unfortunately, all this novelty wears thin after about 48 hours and so after some water sports, which you can only do for so long, you’re left exhausted… by sex – because let’s face it, you’ve run out of anything else worth doing.

It’s easily the best thing about Greece and I highly recommend it for that reason. It’s cheap, sunny, warm, dysfunctional, and boring… which makes it the perfect place to go for a dirty weekend away.

I realise my tastes are unique, and plenty of people love Greece for all the reasons I don’t. In particular, the Chinese… which is really what this article is about.

Unless you’ve been living under a rock, you’ll have heard of China’s ambitious One Belt, One Road initiative. It is essentially the restoring of the historic Silk Road established by Genghis Kahn with his arrival in Europe and Alexander the Great who almost reached the Chinese province of Xinjiang.

There is a long history here with the Hellenic world and Eastern Europe having carved mathematics and Indo-European languages along the old Silk Road, and the Greek-Buddhist syncretism which influenced the development of both art and philosophy in China and India. 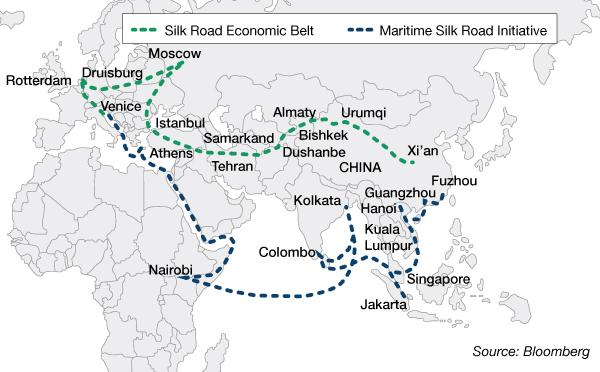 While Brussels farts around with Brexit and Draghi puzzles a catchy name for the next batshit crazy money printing initiative, China has been steadily and quietly using their massive FX reserves ($3 trillion) to lay the groundwork for future trade and their subsequent geopolitical power that will accompany it.

Take a look at where the money is flowing and why.

When it comes to maritime links, first stop once out of the Suez is Greece. It is for all purposes perfectly located as a gateway to the rest of Europe.

The Chinese, being fiendishly smart, realise this. It’s why they’re going to rule the world within a couple decades.

As reported by the Nikkei Asian Review:

When the terminal was still state-run, the Port of Piraeus did not even crack the global top 100 in terms of container volume. Today, it ranks among the world’s 50 biggest container ports.

According to Greek media reports, the port authority’s management team will soon announce new investment plans. The pillars are expected to be a new cruise ship terminal — aimed primarily at wealthy Chinese tourists — and a vessel repair center. One Cosco source said investment over the next five years will “exceed 600 million euros.”

And this from Reuters:

“Greek infrastructure development group Copelouzos has signed a deal with China’s Shenhua Group to cooperate in green energy projects and the upgrade of power plants in Greece and other countries, the Greek company said on Friday.

The deal will involve total investment of 3 billion euros ($3.28 billion), Copelouzos said in a statement, without providing further details.”

And last year, a deal was struck whereby (through the Fujian Shipbuilding company) China accesses European technology – in particular, financing naval armament agreements valued at more than $3 billion, which, by the way, represents 7 percent of Greek GDP. Not small.

Greece likes it since it provides another 190,000 new jobs.

As reported by Bloomberg:

“Fosun International Ltd., the Chinese conglomerate that’s part of a venture to transform the former Athens airport site into one of the biggest real-estate projects in Europe, is now turning its attention to Greek tourism.”

“China – which has already submitted a bid to buy a majority stake in Piraeus – is also eyeing the construction of an 800 million-euro airport in Crete and the main airport in Athens when the government puts it on sale later this year, Greek officials said. Development Minister Nikos Dendias said the two sides also discussed a high-speed rail project.

China attaches great importance to Greece’s unique geographic advantage of being a gateway to Europe and, in that light, is prepared to intensify its cooperation with Greece in basic infrastructure such as ports, roads, (and) railways.”

I speak to a lot of money managers every week, and I can count on my hand just two who, like us, are acquiring Greek assets. This is one extremely uncrowded trade. It’s oh so lonely, which brings an additional level of comfort.

I present to you the Greek Stock market: 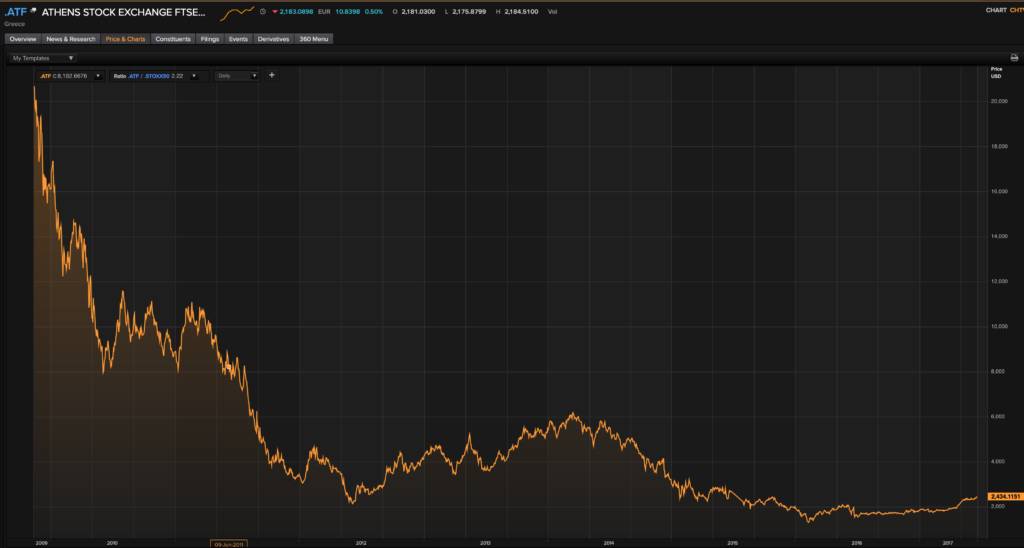 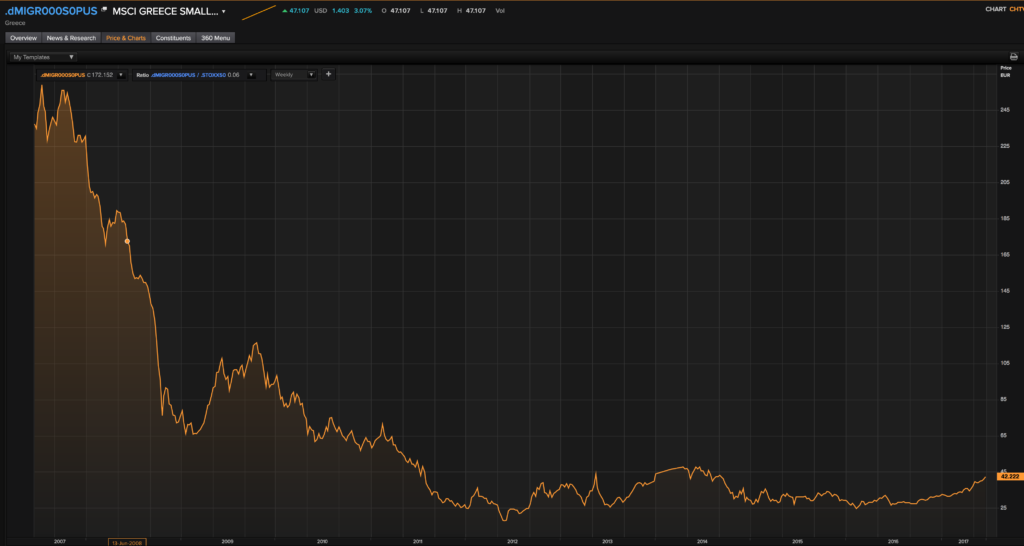 Chinese travel to Greece has been surging since around 2013 but this entire party looks like it’s only just getting started.

You tell me what’s going to happen when 1.5 million Chinese tourists start showing up in Athens every year looking for crumbling buildings and fat, toothless, charming ladies selling oil soaked cheese and leaves?

“In a world of growing interdependency and challenges, no country can tackle the challenges, also the world’s problems, on its own.” — Xi Jinping

Chris has founded and built several multi-million dollar businesses in the investment arena including overseeing the deployment of over $30m into Venture Capital opportunities and advising family offices internationally. Prior to this, Chris built a career at Invesco Asset Management, Lehman Brothers, JPMChase, & Robert Flemings.
MORE ARTICLES »
PrevPreviousWorld Out Of Whack: “This Market is Absolutely 100% Going To Crash”
NextInsider Weekly: The End Of Oil?Next