Throwing Off The Industrial Age Shackles

It was my daughter’s 10th birthday on the weekend and, aside from a raft of giggling girls high on sugar, there was a standout gift from Mum and Dad that featured.

A pair of soccer boots? Yeah, I know. She’s a girl and soccer is a boys’ sport, but this girl loves soccer and I’m all for it. Anything that gets her kicking something other than her brother features strongly on my list.

Problem with these boots is that they’re actually a teensy bit small. She loves them to bits and insists they’re perfect but truth is they’re not really. A size up would probably be better but not perfect either as they’d be a wee bit big. Then there is the fact that her foot shape isn’t exactly shaped for the boot, a problem solved by wearing them in.

All of this is understandable since they’re produced in some Chinese factory on a production run and we can’t expect the Chinese factory to be able to tweak the machine to make my daughters’ pair just a little bit wider than usual and a teensy bit longer.

Industrial manufacturing was never designed for this. And as much as I love my daughter I’m not getting tailor made soccer boots made for her either. That would cost a fortune and I’d be forced to sell one of my children for medical experiments to pay for it.

Complexity in the industrial age was an issue. For every complex product produced a complex manufacturing machine or set of machines is required for only one or two products to be manufactured.

All of this is changing thanks to Chuck Hull, the original inventor of 3D printing.

A couple of years ago Nike began 3D printing football cleats for soccer boots and this is of course the tip of the proverbial iceberg. 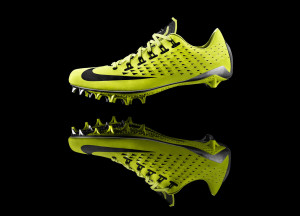 Complexity with 3D printing is free. The computer doesn’t care about how complex any design is. This is turning design and manufacturing on its head.

In the not too distant future shoes along with other garments are going to be tailor-made based on your foot shape, arch, posture, stance, and any other variables which make your foot unique.

Making Sense of It All

Your mates are telling you all about something called a “Game Boy” which sounds amazing; you’ve just watched the latest episode of Seinfeld; Kirsty Alley hasn’t turned into a ball of lard yet; and flicking through a newspaper you find a photograph of Princess Diana in a bikini. You love it and want it. You’ll get it blown up and framed above your new bar.

You hunt down the photographer and thankfully you can actually buy a print. This is then packaged and sent to you and two weeks later you are excitedly opening your package to reveal your prized photograph.

Of course, today we have Flickr, Instagram, Pickit and a dozen other sites where you will simply download any photo and have it printed. And if it’s not quite right you’ll Photoshop it till it is.

Just as we no longer pick up a physical CD to play music (or a DVD from a video store), but instead stream or download what we want so, too, will go the way of manufactured goods. When a part for your car snaps, manufacturers will be sending you a digital file to download and print a new part. Digital distribution of physical items to be printed is no leap of the imagination.

Sitting on our collective horizon is printing of mixed material products. So for example, today you can print a toy car complete with the rubber tyres, a plastic see-through windshield, and a metal chassis.

Where this gets really interesting is when electronics can be included with circuits and sensors and logic. Couple this with the advances made in robotics and you’ll see why we’re on the brink of some of the most amazing disruptive and exciting changes the world’s seen.

“Mass production keeps the world divided between consumer and producer. Demassification of production may hasten the speed towards an era of prosumers.” ― Michael Petch

Chris has founded and built several multi-million dollar businesses in the investment arena including overseeing the deployment of over $30m into Venture Capital opportunities and advising family offices internationally. Prior to this, Chris built a career at Invesco Asset Management, Lehman Brothers, JPMChase, & Robert Flemings.
MORE ARTICLES »
PrevPreviousChanging Life As We Know It
NextSeeking Opportunities In Turbulent MarketsNext