Hands Up, Who Wants To Be Long Crazy?

A woman with far too large teeth tells us she’s going to implement “wellbeing economics”.

None of this fluffy growth or real income levels… or purchasing power. Nah! Real solid stuff like how we all “feel” about each other. It’s out of the pages of a book that includes stories about unicorns and princesses and noble knights. 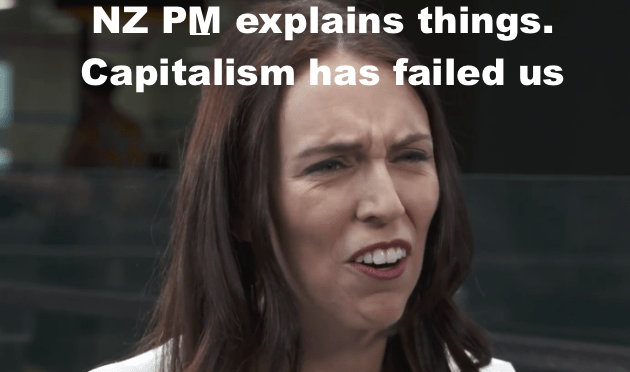 Just to be sure I wanted to know if we were on the same page, so I was diligent enough to look it up.

the state of being comfortable, healthy, or happy.

Being fond of wellbeing myself, I’m eager to know more. Let’s take a look, shall we?

Here’s a sampling of her party’s policies in no particular order.

For starters, she and her tribe are worried about the price of New Zealand real estate. No isht, me too! Heck, I wrote all about it before. Maybe, I thought to myself, she’s onto something.

As it turns out, she’s decided to do the equivalent of yell at the coffee cup for falling to the floor. Because that’s clearly how you defeat gravity.

We are determined to make it easier for Kiwis to buy their first home so we are stopping foreign speculators buying houses and driving up prices. Kiwis should not be outbid like this.

Let me get this straight.

She’ll ban foreign nationals from buying real estate. Ok, I can see some sense in that. Sort of. You know, from a juvenile “everything is a nail if I have a hammer” perspective, and so I look to see what impact this is likely to have on that housing market.

Infometrics, a reliable data source, tells us that a whopping 3.1 per cent of buyers nationally account for foreign buying. No… surely she actually looked at the numbers before yelling to the rest of the world, “Hey, look over here! We’re going full retard Karl Marx on your ass, so watch out!”

But you’d be as wrong as Miley Cyrus swinging naked on a wrecking ball, because either she’s just pandering to ill informed (most everyone) voters or she’s a few sandwiches short of a picnic. Maybe both.

She’s the PM of New Zealand now, so she’d have been informed about a few things. Things like the trade deficit and how it gets balanced with FDI (foreign direct investment).

I hate to have to point out the obvious but when you enact policies that scare away foreign capital, it… um… gets scared away. As my teenage son would say, “You know, like… duh!” 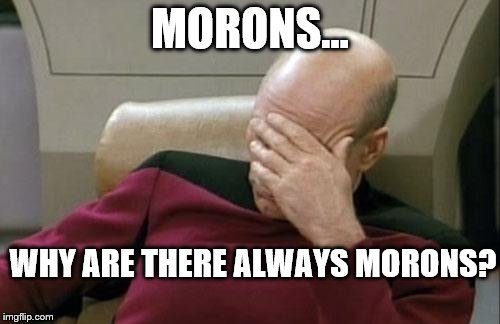 Aside from scaring away FDI she’s decided to be more… ahem… “kind”.

Currently, those from the Cook Islands, Niue, and Tokelau are entitled to the New Zealand pension if they’ve lived and worked in New Zealand for 10 years after the age of 20, and spent another five years doing so once they have turned 50.

That is, indeed, very kind. She’s clearly got a lot of money to throw around. Is she secretly Mark Zuckerberg’s mistress?

Why no, she’s actually piss poor herself, and so it’ll have to come from “someone else”. Or borrowing. Or both.

And you may say, “Whoah Chris, how did such a lovely place filled with shiny happy people go about voting in a 37-year old whose credentials amount to being a DJ who tweets motivational hashtags?”

And I’d throw the question back at you and say, “Hah, Germany has Merkel and the US an ill tempered, petulant man-child who now has a big hammer. And don’t you get me started on the UK. Well they don’t even have anyone. Unless that funny looking hag, May, is actually leading anything at the moment. Still, things could be worse for them. They could actually get Corbyn.”

But the real answer is a story stranger than fiction, because while we can point and laugh at the electorate elsewhere in the world (though, in truth, the poor yanks had a face off between a crook and a jerk, which… let’s face it… was, as Julian Assange stated, “Like choosing between syphilis and gonorrhoea”).

But in Mordor they didn’t actually vote in “big teeth”.

By a particularly screwed up set of voodoo magic called MMP whereby minority parties actually get a greater proportional vote the entire country voted “not Jacinda”… but then got her anyway. If it all sounds loony, that’s because it is.

And when the rest of the world saw this go down the gut reaction was to sell.

And over the last few months the place has had to endure all this loony talk — babbling about babies and mental health and how all that’s needed in order to be prosperous is for everyone to be kinder.

It’s enough to put an elephant to sleep, and so the markets have shrugged it all off likely putting it in the “too hard, but probably not really scary” basket. I mean, she’s big teeth, but not like a dracula or anything. She really looks completely harmless. Then again, so did Kirchner! 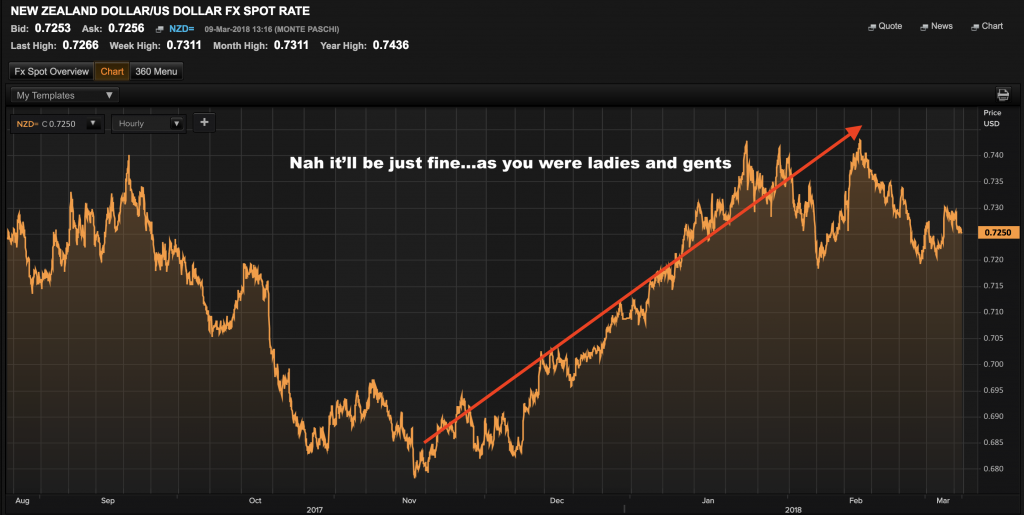 Ok, now I’d like to take you back to that period of time when we had an unsustainable bubble built on leverage on the back of a banking and real estate mania — 2007, you might remember it.

Housing was a sure thing and the financial system was sound. Except it wasn’t. And it didn’t much matter what was happening in Mordor… or any other place with a functioning capital market for that matter. EVERYONE felt it in some way or another.

It’s become known as the Great Financial Crisis, and what followed has been a period of central bank intervention that we’ll just call “unusual”, shall we? If central bankers were merely recreational drug users before the GFC, then there’s no question that they’ve become raging addicts ever since.

If central bankers were merely recreational drug users before the GFC, they've become raging addicts ever since.Click To Tweet

Except, in order to keep all of this — the sovereign debt buildup — together without isht blowing out all over the place via some escape valve we needed, and indeed have had, policy coordination on a global scale that has been truly extraordinary. As extraordinary as if we all woke to find the Kardashians winning the Nobel prize for contributions to quantum mechanics.

As I’ve mentioned in the past, the rise of “strong men” globally ensures that this period of “coordination” is OVER. OH-VAH!

The market indicated this to us back in 2016 when the bond market turned. But what this means is that keeping the entire fragile bond market aloft going forward will be swimming upstream, against the current. Being a lazy person I don’t particularly want to be positioned that way.

So what, Chris? What does this have to do with “big teeth” and her stupid policies?

Well, “big teeth” has come to power right at the wrong time and doing exactly the wrong things, just as the entire market is turning and ironically about to solve that housing problem she’s so worried about.

This is LIBOR, the rate at which banks lend dollars to one another. It’s been rising in an unrelenting steady fashion ever since 2016.

And guess how those New Zealanders are buying houses.

Why with borrowed money, of course.

And where do they borrow the money from?

Their local banks who are incidentally all Australian owned.

And tell me, Chris, where do those banks obtain their funding from?

And where would I look to find out what risk is priced like in this interbank market?

Now, none of this should be a problem if the average Kiwi wasn’t levered to the hilt. I mean it wasn’t like they didn’t get a snapshot of what happens when you borrow up to your eyeballs and then find you can’t pay for it. The GFC, remember?

Except that memories are like Danny DeVito — short. And so we find ourselves in a situation where most mortgages are sitting between nine and 12 times borrower income. To make it easy for us to understand the dynamics at play here let’s look at two sets of numbers.

Note: The majority of mortgages taken out are 20-year term mortgages with the most common fix being a 2-year fixed interest rate. I’ve assumed 5.15%, which is what 3 of the major banks in New Zealand are currently offering.

Based on this and using 10.5x earnings (since this falls between the 9 and 12x borrower income levels) here are the numbers:

Now, you might look at this and think to yourself, “Oh my giddy. Aunt, how do you manage to live on $15,796 per year? That’s got to pay for insurance, healthcare, electricity, water, schooling, clothing, that new iPhone you really want— all before you’ve fed yourself.”

I ask myself the same question. And I don’t have an answer for you.

But this is where it gets better… or worse, depending on your situation, of course.

The Second Set of Numbers

We’ll assume all the same numbers but now we’re going to take a look at LIBOR and realise that at some point those rising rates affect swap rates, one thing leads to another next thing you know that 2 year fix jumps 100 basis points (which is nothing really). Here’s how it all looks.

And so now after mortgage payments you’re left with $8,632 per year. Your disposable income has been HALVED!

And this is one of those remarkable situations where the distortions created by the mispricing of risk capital by central banks has provided us with the unintended consequences. Consequences that poor innumerate and economically illiterate “big teeth” now tries to “solve” by frightening away foreign capital — the very thing that New Zealand is going to desperately need as this isht hits the fan.

I’ve a nasty feeling that “wellbeing” of the average Kiwi is going to have be recalibrated.

Chris has founded and built several multi-million dollar businesses in the investment arena including overseeing the deployment of over $30m into Venture Capital opportunities and advising family offices internationally. Prior to this, Chris built a career at Invesco Asset Management, Lehman Brothers, JPMChase, & Robert Flemings.
MORE ARTICLES »
PrevPreviousThe State Of Affairs Of The Nuclear Power In Germany
NextInsider Weekly: Killing Two Birds With One StoneNext