How Putin Just Saved Europe, and Other Geopolitical Tales

Picture this scenario. A brother and sister squabbling with one another. Something’s gone wrong, they’re blaming each other, fighting, and generally at each other’s throats. Along comes the boy from next door who pokes fun at one of them and starts pestering them. Brother and sister rapidly put aside their differences, join forces and deal with the boy from next door.

The saying, “The enemy of my enemy is my friend” has played itself out many times throughout  history and, while geo-political relationships may not be as close as siblings, the forming of alliances and the repercussions from having joint enemies can be profound.

During the second World War Stalin realized that he needed the Allies to defeat a Nazi invasion, and in turn the Allies realized that the Soviets were necessary for the war effort. In any other scenario the Allies would have been arch enemies of Stalin and vice versa.

During the Cold War a similar setup occurred with the Soviets and Chinese aiding North Korea during the Korean War, and then aiding the Viet Cong during the Vietnam War.

On a country specific basis many a dictator has been propped up and supported by Governments pretending to their citizens that they in fact abhor the acts of such people. A controlled media and messaging ensure that the vast majority of citizens don’t think too much or dig too much. Government, after all, is largely in the business of marketing. Mobuto Sese Seko, Augusto Pinochet, Saddam Hussein, Pol Pot, and currently the Saudi Royal family. All strategic at some point in time.

I’m not picking on any of these for any particular reason other than that they’re choices which everybody knows about, and the relationships are well documented. Government in all instances does this. Nothing unusual. As they say in Thailand, “Same same but different.”

Well, this time it’s same same but different, too. We’re seeing similar alliances forming now. This time Europe and the US forming an alliance against Russia, and China together with Russia moving towards forming and solidifying existing economic alliances.

Consider that in just the last few months I’ve had the following snippets cross my news-feeds:

In Europe, Putin, the boy from next door, has distracted the Europeans from their political and economic woes, and the infighting which has been building between the Europeans has taken a backseat to more immediate problems. Taking a look at the news since Ukraine started making headlines shows me that distraction appears to be working. I’m not suggesting this was by design. I don’t think that’s the case. It is, however, convenient for EU policy makers who’ve completely screwed up the European marketplace and are looking for someone to blame. Putin is a Godsend.

Life for Europeans will get worse… much worse. Sanctions with Russia are already destroying European agriculture, but at least Eurocrats can blame the economic decline on external factors. Watch for it. You can bet on it. In the meantime, let’s look at who hurts the most from the Russian ban on US and EU food imports. 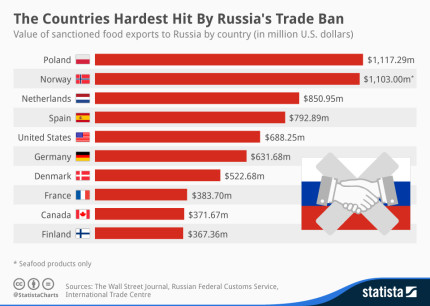 Keep an eye on PKO, Bank Polski, Poland’s largest lender. Earlier this year they raised $2.7 B in a bond issuance. Little did they know how lucky their timing was. No way would they be able to sell bonds at levels achieved in January of this year, now. The question is, will they survive as their loan book collapses?

While all this is taking place I have to wonder where and what other opportunities arise from this very large and accelerating power shift. An active move away from the dollar is underway and has been for some time. What is important now is that this is being accelerated by the public sector and not the private sector. Moves such as the BRICS setting up the financial infrastructure to transact away from the dollar is bold indeed.

Actions of this nature, or just the mere consideration of such actions, would have been previously met with threats of tariffs, curtailment of aid or even outright sanctions from the United States. That they are taking place now on a near daily basis shows just how fast the geopolitical landscape is changing. The economic decline evident in the Western, socialist world and the US in particular is evident to anyone not reading CNN. This coupled with Obama’s refusal to curtail the NSA has accelerated both the desire and the fortitude of many countries around the world to proceed to change the status quo.

Talking with my private banker in Singapore I asked what bankers thought of all of the FATCA rules. Her response was, “It won’t be too long.” These absurd rules exist and have to be complied with while the dollar is the reserve currency, but when, not if, alternatives exist then simply choosing not to play in that particular sandpit any longer will be more favourable than the revenues currently being earned by complying. Right now banks make too much money to walk away from the existing financial setup, which is dictated by US banks, US clearing houses and US money.

This is changing. The amount of capital flooding into Singapore and Hong Kong is putting pressure on the banks here and pushing up already crazy real estate prices. There are other sectors we’re interested in and taking advantage of. One of them is private equity, which is our particular niche. Capital flows are very important and we believe that the next big M&A activity will be in Southeast Asia and we are moving aggressively to take advantage of this.

In the meantime, I’m curious what opportunities readers think are opening up. Drop a comment below and let me know.

Chris has founded and built several multi-million dollar businesses in the investment arena including overseeing the deployment of over $30m into Venture Capital opportunities and advising family offices internationally. Prior to this, Chris built a career at Invesco Asset Management, Lehman Brothers, JPMChase, & Robert Flemings.
MORE ARTICLES »
PrevPreviousThe Ugly Truth about Diamonds Monopoly
NextThe Bubble is in Cash, Not Stocks…Next

Revolution armbands in Venezuela might be a good business these days. It seems that Einstein’s definition of insanity is not too well known amongst south american politicians.