How to Get Amazing Abs and Understand Markets (No, Seriously!)

My wife has been performing the “plank” at her local running club for over a year now. For those of you who are scratching their heads, this is a core strengthening exercise whereby you hold a “plank” position for an extended period of time. 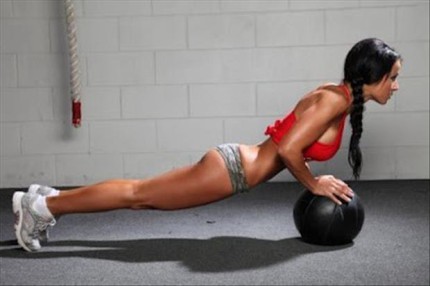 Staring at her amazing abs and then at my own sorry excuse for same, I resolutely decided it was time to include this into my workout, and this morning was my first crack at it.

Objective: plank face down and repeat on each side. All 3 positions done to failure.

I got to 40 seconds and began to feel it. Another 10 seconds. Yeah, 10 bloody, minuscule, petty, little f*&$ng seconds, and I began to get a bit of a shake and wobble… Concentrate! Focus, dammit!

Sweat beads exploded out of my forehead at 60 seconds and my entire core was on fire. Collapse came shortly after. The rate of change was insane. One minute I’m thinking, “Huh, this isn’t bad at all.” and then, as the seconds tick on, there is a small realization that the world is changing, and then quite suddenly you realise you’re in trouble. Literally seconds later your body is screaming at you and you’re wanting to cry “Mommy!” which is followed by holding out with steely determination, trying to eek out just an extra second, maybe two… a third, fourth, followed by lying in the fetal position wondering what the hell just happened as your muscles cave in.

My body’s ability to hold the plank position had, and has an exponential rate of decline. At 10 seconds the rate of decline is minimal but at 60 seconds each nanosecond is really, really hard to maintain. Ok, now if you’re one of those guys or gals that regularly hold a plank position for 5 or 10 minutes I don’t want to hear from you 🙂 For me, just squeezing out one last second takes Herculean effort, and I’m just over a minute.

This phenomenon is visible in nature. Consider water reaching boiling point. Water in a kettle heats gradually and when it actually boils it literally goes from a liquid to a gas in the proverbial blink of an eye.

Nassim Taleb speaks about that last snowflake which sets off an avalanche. Everything is fine until it isn’t. 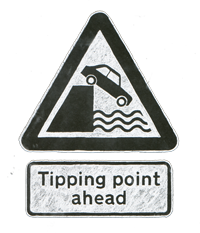 Whether we’re talking about an avalanche, water boiling, or my sorry attempt at keeping fit, in all circumstances the build up of power, heat and exhaustion is often not particularly visible until it’s very close to its final stage or even afterwards.

Financial markets reflect the very same characteristics. Prices do NOT reflect underlying reality the majority of the time.

Efficient market hypothesis will have us believe that markets trend toward equilibrium, yet if we look in the rear view mirror we can see this is simply not the case. Perceptions play an exaggerated role.

I was reminded of this when being sent an excellent market commentary written by the CEO and CIO of Morgan Creek Capital, Mark Yusko. In the commentary Mark delves, among other things, into a number of tenets of George Soros.

One Soros’ quote in particular stood out for me.

The worse a situation becomes, the less it takes to turn it around, and the bigger the upside.

This is what Brad talks about when looking for asymmetry. I’m going to use another Soros’ quote which drives to the heart of this topic.

Find the premise which is false, and bet against it.

Now let’s take a gander back in time and take a look at the Slovenian stock market crash in 2008, though we could just as easily choose any other market crash where we’d find similar variables.

What premise was wrong? Brick and mortar blue chips trading at 40+ price to earnings. What could possibly go wrong?

Below some other well known examples of “water to water vapor” experiences enjoyed by investors.

When I say “enjoyed” of course I mean that investors were experiencing stomachular reversal and bankers were jumping out of windows.

The USD carry trade has grown with ever increasing speed, as market participants emboldened by a reflexive action of both a declining dollar as well as outperforming foreign based assets, encouraging increased leverage resulting in an estimated US$9 trillion carry.

For all the reasons we discuss in our “US dollar Bull Market” report we believe that we have a false market premise, the results of which have already begun to show themselves in the currency markets. This storm is just gathering strength and looks set to break onto the world stage in spectacular fashion.

What else is reaching boiling point?

Certainly the European debt debacle. Here we have Greece, a country that cannot by any measure pay back the enormous debt (175% debt to GDP) it owes. While their debt load is bad enough what is important to understand is that their economy has shrunk by almost a quarter since 2008. This is incredibly deflationary and remember deflation is the sworn enemy of debt. The Germans, on the other hand, no doubt aware of all of this – they can do math after all – cannot publicly acknowledge the fact.

Acknowledging the fact would require them to take the next logical step which is to restructure the debt. However, if they’re to restructure Greek debt then they’ll be sending a clear sign to Spain, Portugal, France, etc. that this is how the game is played. That then will be the end of the Euro. A good thing but not without serious disruptions to global financial markets.

Parents among us know that allowing one child to have an ice cream comes with the unwritten rule that any siblings will be getting one too. Well, European siblings are all eying German-Greek negotiations right now with keen interest.

While this soap opera is playing the rest of the world is deciding whether this whole euro affair is worth waiting around for. A market perception, or a change in the balance of opinion of a market can be that last snowflake.

While central bankers and bureaucrats in Brussels try to “solve” Greece’s problems, and by extension the euro, it looks to me like the market itself is beginning to treat the euro with the respect it deserves. The euro is rapidly being treated as the currency equivalent of ginger hair – it’s going to get bullied. 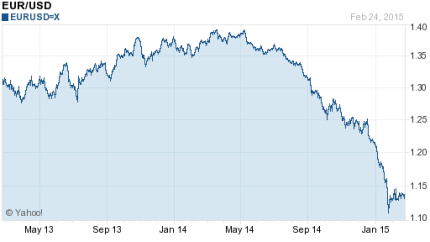 Chris has founded and built several multi-million dollar businesses in the investment arena including overseeing the deployment of over $30m into Venture Capital opportunities and advising family offices internationally. Prior to this, Chris built a career at Invesco Asset Management, Lehman Brothers, JPMChase, & Robert Flemings.
MORE ARTICLES »
PrevPreviousThis WILL Happen!
NextThe Market is Simply NOT Expecting This to HappenNext

One of your best !

I hope you made it past the first paragraph:-)