In my recent post entitled When The Theatre Clears I discussed crypto-currencies. Specifically I said:

“While the vast majority of citizens in most any country in the world today do not see a crypto-currency as a reliable or viable substitute for the scraps of paper they shuffle around daily, this perception can change rapidly when panic sets in. Suddenly ANYTHING seems viable.” 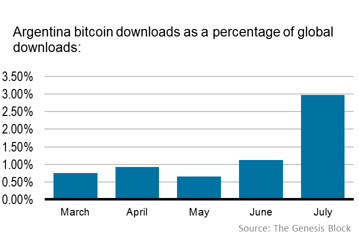 A few statements from the article are worth reviewing:

“With employment declining, Barclays predicts that authorities will likely accelerate the pace at which they’re depreciating the peso.”

Sounds awfully similar to statements from the FED open markets minutes to me!

“Argentines are trying to trade pesos for anything of value because the inflation is so insane.”

Who would’ve guessed devaluing the Peso would cause rampant inflation?

Then we have the following from Reuters:

“Argentina bans buying dollars as a way to save.”

Yep, governments will absolutely and arbitrarily deem any actions you take to protect yourself, that might also be construed as undermining their “legitimate” right to “protect” and “own” you, illegal. Count on it!

OK, so that’s the background, but what about the opportunity?

People are always saying things like, “How do I make money”, “I’m stuck in my job”, “The prospects are poor”, …blah, blah, blah.

This level of thinking, or should I say lack of, is a waste of time. It’s just not productive in any way. In crisis there is greater opportunity, yes GREATER. Take a look at that graph above and broaden your thinking. Here’s an idea for you:

Set up an encrypted “wallet” that stores in one place, through one account, multiple crypto-currencies. I don’t know how to do it…You figure it out, that’s what you’re going to get paid for! Then, make half a dozen of these crypto-currencies available to be stored in this “wallet” and manage the process. That way the average Joe like me can go and buy a basket of them.

Which crypto-currency is going to fail and which will survive? I have no idea, and you shouldn’t care. Cater to them all. Provide the “highway”, not the cars. You may even be able to clip the ticket a bit and take a percentage of “assets” in the wallet as a kind of storage fee. Then target your marketing to the countries in the world with the worst fiscal problems.

If you don’t know how to do that or are just too lazy, how about this:

Write a book…a 50-page user guide like, “The Idiots guide to buying crypto-currencies and protecting yourself from monetary mayhem.” Sell the book for $20 in the Amazon Kindle store.

That’s just the start. You could even get a few tech whiz-bang-geeks to provide support for people who can’t or don’t want to read your book. Some people like having their hand held with this stuff…I do. Your “clients” pay a fee to get set up and shown how to buy and store crypto-currencies. Then take it a step further and sell a course on becoming a (CCCE) “certified crypto-currency expert”. Charge $1,000 for the course and have your tech guys coach people. Then franchise the certified support network.

What’s the size of the opportunity? Or, better asked, how much money exists in the system?

How many more Zimbabwe, Argentina and Cyprus situations are heading our way? I don’t know the answer, obviously, but you only need a small slice of what already exists and what’s coming to get incredibly rich.

Lets go back to the land of Kirchener for a minute.

There are 42 Million people in Argentina. Is it a stretch to think 1/10 of 1% would be interested in a book that helped them protect themselves from guaranteed theft? That’s 42,000 people, or $840 thousand dollars from a $20 booklet.

How about Japan? A captive audience of about 130 Million that are seeing their currency devalued. Then there’s the US at about 315 Million. That 1/10 of 1% is starting to look like a lot of money!

Governments will continue to devalue, it’s baked in the cake in my opinion. It’s a painful reality NOW in Argentina. It’s now in Japan. It’s now in the US despite the rhetoric to the contrary.

Bit by bit, inch by inch we get closer to an inevitable loss of confidence in a major currency.

Just remember, nobody thought the USSR was going to collapse, including people in the USSR, until suddenly it did. Today, nobody thinks the monetary system, which is to say the USD hegemony, will collapse. It’s not just the USD, it’s the Euro, the Yen…

Some people are getting very rich. Most aren’t. I don’t make the rules, in fact I hate the rules. They suck, but entrepreneurs are problem-solvers not whiners.

Nobody wants to be the guy holding the bag like the Argentines are being forced to now. In the world of monetary mayhem there promises to be much wringing of teeth and gnashing of hands…and, providing solutions to the inevitable will be well-rewarded, you can count on it.

Something else I mentioned in my previous article:

“Anything not under the thumb of government mismanagement will come under fire from that same establishment.”

“…it will simply be made “illegal” to use it! It will be “demonized”, and those using it will be pushed into the underground.”

For those who are AWAKE, this is the world we’re living in right here and now. The opportunities are as enormous as the crisis.

Here is the part on how you save Edward Snowden’s life.

Follow the path laid out above and you will pose a far greater threat to the US Government than Snowden. Sure, you may need to base yourself in Caracas or something, but don’t they always have a top 10 contender for Miss Universe? Things could be worse.

Being exposed and humiliated by Snowden is one thing for the USG, but challenging the USD and the global monetary system is quite another. You’ll almost certainly make it onto a “list” of some sort. Welcome to the real world. I wish it wasn’t so…

If you’re really, really successful the powers that be will be in such a blind panic that Ed will become yesterdays news, and he may be able to slip out to Caracas on a Russian Nuclear Sub…he’ll have you to thank.

“I hope we follow Mr Snowden to the ends of the earth and bring him to justice.” – Senator Lindsey Graham

Chris has founded and built several multi-million dollar businesses in the investment arena including overseeing the deployment of over $30m into Venture Capital opportunities and advising family offices internationally. Prior to this, Chris built a career at Invesco Asset Management, Lehman Brothers, JPMChase, & Robert Flemings.
MORE ARTICLES »
PrevPreviousThe Case for Frontier Farmland
NextThis Scumbag Tried to Steal a Million Dollars From Us and We Wished Him Well!Next

The End of Oil Within 10 Years? | Capitalist Exploits

The End Of Oil Within 10 Years? - BuzzFAQs

The End Of Oil Within 10 Years? | StockTalk Journal

The End Of Oil Within 10 Years? | Economic Crisis Report

The End Of Oil Within 10 Years? – The Conservative Insider

The End Of Oil Within 10 Years? | US-China News