Some 12 years ago, on my first trip to China, I found myself pleasantly surprised by almost everything I saw. The high quality and low cost of accommodation, the fantastic roads, and overall infrastructure.

I found a friendly people with a truly surprising level of wealth. It was a country I knew very little about; a country which, had I been listening to the brain-dead media, was “Red China”, a commie outpost suffering an armageddon type battleground, overpopulated with grovelling, poverty-stricken, half dead villagers eating dogs when they couldn’t find a foreigner to feast on.

Nothing could be further from the truth, though less pleasing was the pollution in the cities, me being fussy about wanting to breathe air rather than chew it, and the surprisingly poor quality of food in general. Since that first trip the food has gotten much better while the chewable air has gotten worse.

I bring up China since it popped into my mind recently while conducting due diligence on a deal. I was reminded about an experience I had in China which I’ll tell you about in a minute…

While looking through the term sheets and shareholder agreements, we questioned some of the elements and were told that they were “industry standard.”

“Industry standard,” together with “standard procedure” are probably two of the most overused, loaded phrases in business, as they denote a certain sense of authority where the recipient is meant to find themselves as an outlier if in disagreement.

What may be considered industry standard in one country can be completely unusual in another, and even within varying parts of the business cycle. Right now the S&P is trading at roughly 20x earnings. One could argue that is a type of ‘industry standard.” Does that make it right?

A handful of examples that come to mind from recent deals we’ve been working on:

I wrote an entire post around stacked notes and how investors are getting royally screwed by companies raising money (especially in Silicon valley), and today it’s considered… you guessed it – “industry standard.”

The hell with industry standard!

Whenever traveling to a new country there are always new norms to adjust to – driving on the correct side of the road, ensuring you use the correct means of greeting people, dressing appropriately (the UAE) and so on. We’re adjusting to a new set of “industry standards” in an unfamiliar place. Nobody thinks it peculiar in their home territory. It’s just the way things are done.

One of the things that is “industry standard” in parts of China which is… ahem, different is the way they potty train toddlers.

I was violently introduced to this while dining in a restaurant in Xian. Sitting a few meters away was a family with a toddler. The toddler, feeling the urge, proceeded to defecate all over the restaurant floor. The parents continuing to enjoy their meal, watched the process much in the same way you’d watch pigeons scoffing breadcrumbs, in other words, completely unperturbed.

I, on the other hand, clutched for the anti-nausea medication which should have come standard as condiments on the tables. I’d seen toddlers walking around with the “slip pants,” but thankfully had yet to see them being put to use. My first time was to be while eating my lunch. Lucky me… 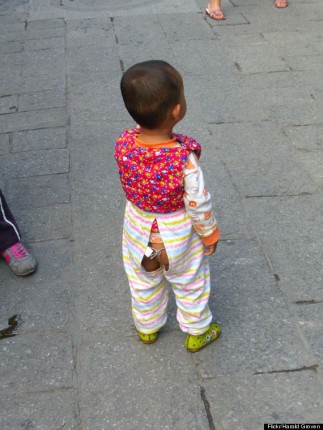 In Western society toddlers wear nappies/diapers and are trained to “go potty.” As nasty as changing nappies tends to be, they do serve a dual purpose: as punishment to parents everywhere for bringing little brats into the world; and, more importantly it sure beats cleaning up excrement out of kids clothing, or off the floor of restaurants.

Thank God then for disposable nappies, clearly one of mankind’s best inventions, right up there with antibiotics, the Internet, quantum physics, electricity and the string bikini.

In business this terminology is used frequently to provide legitimacy. It can be dangerous and is certainly annoying. Just as I wouldn’t let a toddler defecate on my living room floor, so too I don’t want investments poorly structured, whether considered industry standard or not.

Just remember what is industry standard today may well be looked at as completely ludicrous tomorrow. Remember the deals put together in the dot-com boom? Yeah, so much for “industry standard!”

“The hell with the rules. If it sounds right, then it is.” – Eddie Van Halen

Chris has founded and built several multi-million dollar businesses in the investment arena including overseeing the deployment of over $30m into Venture Capital opportunities and advising family offices internationally. Prior to this, Chris built a career at Invesco Asset Management, Lehman Brothers, JPMChase, & Robert Flemings.
MORE ARTICLES »
PrevPreviousThis One Thing Has Killed Before and It’s About to Kill Again
NextPolitical Accountability from a Perspective of a Venture CapitalistNext

I always had great “fun” with setting up contracts among parties who seemed to be in total agreement. Whenever I read a draft, I usually ask things like “But what is, when … such and such … happens?”. And both parties, while not shouting “industry standard” say something like “… well that goes without saying”. To which I answer ALWAYS: “well, if it goes without saying, we might as well say it” – and then I put it in the draft. After-effect: practically no such agreement later ended up in the courts – because people, even after falling out with each other over something, just had to look up all the things which would have gone without saying, but now, after many years, been “remembered” quite contradictorially by the respective parties (which then leads to ask the court to decide it). Those parties sometimes thank me for it, their legal attorneys do not always … 😉 …

Thanks for commenting. You’re dead on. Carefully spelling out things which a the time seem to be “obvious” saves a lot of headache when things go wrong…and they WILL go wrong at some point for sure. No matter how vigilant we all are in our investments when it comes to Venture Capital at some point in your portfolio things will blow up.
Thanks for your insights.