Iraq: What You Haven’t Been Told

We know that George and Tony told us the war is over and that was ages ago so it must be true.

In fact, things must be jolly peachy by now because by my calendar that was May 2003, some 14 years ago. Still, George and Tony – like many podium donuts before them – said a lot of things and so with much of what traditional media tells us oscillating between questionable and “hahaha, bullsh*t”, it makes a whole lot of sense to source information directly from credible sources.

I’ve made a point of doing this personally and I can’t recommend it enough. In any event, long-term readers will recall my buddy Thomas Hugger from Asia Frontier Capital (I chatted to Thomas here).

Well, one of the funds under Thomas’ umbrella is a relatively newly launched Iraqi fund, and so, since I wanted to get a better idea of what’s happening in the Middle East and Iraq in particular, what better person to bring me up to speed than the CIO of the AFC Iraq Fund, Ahmed Tabaqchali.

I hit record on the conversation so that you, too, could enjoy it:

In addition as a follow up Ahmed followed up with a lot of data points (message below). This should be read in conjunction with the recorded call.

The correction in the equity market that was anticipated in last month’s update started in late January and extended into February with an overall decline of about -3%, as measured by the RSISUSD Index, which seems to have played its course and it looks like the market will end the month flat. The most likely scenario is for an extended consolidation with an upward bias in the next couple of months.

I, however seem to have been overly cautious in underestimating the strength of the rebound which is often the case in illiquid frontier markets in that observers always underestimate the strength of a rebound in the same way that extent of a decline exceeds observers’ expectations.

This year’s market, so far, is playing out as the mirror image of last year that saw a relentless decline in the index with -13.7% in January, -4.4% in February, -10.75% in March, -6.6% in April, and -11.9% in May. Liquidity is the same driver with this year seeing an initial & gradual recovery in liquidity while last year it was the final draining of liquidity.

The revival in liquidity is mostly local with foreigners selling for the month, although at much smaller levels than last year (see chart below). While, this is an unwelcome development, never the less the flip side to it has been the ease at which locals have absorbed this selling especially considering that foreign selling in selected names has resulted in minor declines of -3% to -7% which has mostly been recovered as a result of local buying that seems to continue unabated. 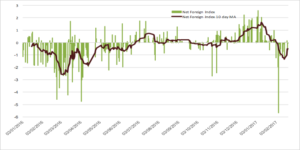 The same observations hold for the recovery of the market price of the Iraqi Dinar with the price action mirroring that of the equity market. Recall that last month it was observed that the market price of Iraqi Dinar (IQD) vs the USD has improved by about +1.8% for January lowering the premium over the official exchange rate to about 8% from just under 10% that devolved in 2016. The premium widened to 8.7% by mid-February but has recovered to about 7.2%.  This is still above the normal range of 2-4% leaving room for further narrowing of the premium (see chart below). 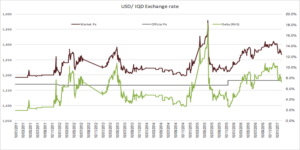 However, the improvement in liquidity is still in the early phases, with overall liquidity still scarce as can been seen from average daily volumes that although are at the same elevated levels of the last few months but are meaningfully below those of the prior years when the market was much stronger. Given that the risks of the last two years are still present, liquidity in the economy is still scarce that the recovery will likely be in fits and starts and the opportunity continues to be to acquire attractive assets that have yet to discount a sustainable economic recovery.

Supporting liquidity improvements are the continued strength in oil prices at sustainably higher levels that those budgeted for by the government & the IMF and thus should give further impetus to the expansion in non-oil capital investment spending which is estimated to be up +192% yoy in 2017 after contractions of -68% in 2016 and -50% in 2015 (the importance of this investment spending for the economy was highlighted in December’s newsletter in the section for 2017 outlook which appears under the December 2016 review).

The last few days saw further acceleration in the Mosul offensive with the start of the campaign to liberate the western part of the city, which is coupled with increased US support and involvement as highlighted by the US defence secretary’s current visit to Iraq. Parallel developments against ISIS in Syria have been taking place which combined should accelerate the end of the ISIS occupation and end of conflict.

Finally, the chart below continues to support the thesis that the market has a significant catching up to do in the long process of discounting the end of conflict and the subsequent recovery afterwards. The recent gains, as impressive as they are, only represent a 30% retracement of the -68% decline from 2014 peak to 2016 multi-year lows. 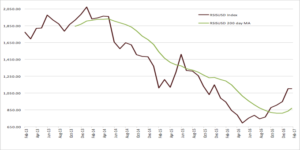 I find that every little extra data point and nuance is valuable to me, even if at the time I can’t see how it may have an impact on what I’m focussed on. Over time, it provides an incredible war chest of intellectual firepower in that 3 pounds of mushy stuff stored inside our skulls.

Since Iraq is a geographically strategic player in the Middle East, understanding what is happening there and with their neighbours could well be very valuable to us as investors and to those wishing to participate in the country. As is so often the case with postwar economies, the returns can be pretty phenomenal.

I’ll leave you with some of the key quotes from the Chilcot report, because, after all, it’s worth knowing some things about the conflict, the aftermath of which Iraq is still grappling with:

“We’ve concluded that the UK chose to invade before the peaceful options for disarmament had been exhausted. Military action at that time was not a last resort.”

“It is now clear that policy on Iraq was made on the basis of flawed intelligence and assessments. They were not challenged, and they should have been.”

Tony Blair “overestimated his ability to influence US decisions on Iraq”

“The judgements about the severity of the threat posed by Iraq’s weapons of mass destruction – WMD – were presented with a certainty that was not justified.”

“Despite explicit warnings, the consequences of the invasion were underestimated. The planning and preparations for Iraq after Saddam Hussein were wholly inadequate.​”

The legal basis on which military action was launched was “far from satisfactory”.

“The Armed Forces fought a successful military campaign, which took Basra and helped to achieve the departure of Saddam Hussein and the fall of Baghdad in less than a month.​”

“The invasion and its aftermath led to the deaths of 150,000 Iraqi, most of them civilians.”

“The Government’s preparations failed to take account of the magnitude of the task of stabilising, administering and reconstructing Iraq, and of the responsibilities which were likely to fall to the UK.”

“Military action in Iraq might have been necessary at some point, but in March 2003 there was no imminent threat from Saddam Hussein.”

Chris has founded and built several multi-million dollar businesses in the investment arena including overseeing the deployment of over $30m into Venture Capital opportunities and advising family offices internationally. Prior to this, Chris built a career at Invesco Asset Management, Lehman Brothers, JPMChase, & Robert Flemings.
MORE ARTICLES »
PrevPreviousTrump And Russia: Just Pointing Out The Obvious
NextWorld Out Of Whack: It’s Coming, Watch Out For These 4 CatalystsNext