Is This How It All Begins to Unravel?

My daughter found a sick baby bird in our garage a few weeks ago. We took it in and began nursing it back to life. My daughter, a gentle little soul who believes that our home should be turned into an animal shelter for every imaginable creature whether it needs help or not, was interested in the species of bird we were looking after.

This led us meandering down the ornithology path. After we’d identified our patient as a house sparrow, we continued looking at other birds. What we found was a particular species of bird which I immediately recognized as a bird which should be the mascot for sovereign debt.

Fulmar chicks, like many small birds, are very cute looking. They look completely harmless. You can imagine cuddling one, taking it home to your partner and being rewarded with all manner of affection for being so thoughtful, “Oh dear, she’s beautiful. What a lovely gift.”

The fulmar, however, has a little secret. This cute looking chick sprays puke all over anything which comes too close. This is a defense mechanism designed to ward off enemies. When you come too close to it, this seemingly innocent little ball of fluff will projectile vomit a type of rotten fish smelling oil all over you. Apparently it’s incredibly difficult to get the vile smell off your skin even after using a wire brush in the shower. What a little bastard of a bird! 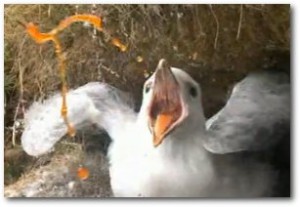 If you so happened to be a predatory bird you’re really screwed. The fulmar’s “gut oil puke” acts like a form of unbelievably strong super glue, gluing your feathers together and making flight impossible. Should you decide to head into the water to rid yourself of this death vomit, the sticky vomit apparently causes you to lose your buoyancy and you drown!

Murderous puke! And yet the bird looks harmless…

Similarly, investors lulled into a false sense of security caused by linear assumptions, have loaded up on sovereign debt, believing mistakenly that they’ve got themselves a safe asset. It is the equivalent of a harmless sparrow. Something that can’t possibly harm you. Boy, will they find a surprise when they open the shopping bag and realise what they’ve actually taken home. A vile stinking destructive package of crap, disguised as a safe investment. Risk free, they’re calling it.

Not long ago I showed how debt has risen since the 2008 crisis. In fact, today we have this unique situation where in Europe we’re staring at 700-year lows in interest rates.

Surely, with interest rates so low we’d expect to find a field of daffodils on the risk side. Declining yields on bonds would normally be attributed to lower risk of default. Stands to reason, but reason cannot be found today in the sovereign debt markets. Instead, we find that risk is off the charts.

When I stare through my murky windscreen the road ahead looks uncannily like the end of the great debt cycle. This is not the normal 7-year business cycle we’re dealing with here and it makes timing all the more difficult. As tough as it is in calling the end of a long term debt cycle, why would anyone without the benefit of mind altering drugs take the tail risk of long duration sovereign debt for such paltry returns?

I’m going to go out on a limb here and say that if the Fed does indeed raise rates in June we’re going to begin to see periphery sovereigns default. The probability isn’t what matters so much as the price we have to pay in order to position ourselves to take advantage of that probability.

Pray tell, what happens to European debt relative to US debt?

My guess is that investors in European sovereign debt will puke as they realise that they’ve brought home the equivalent of a fulmar, instead of a soft cuddly barn swallow which couldn’t do them any damage.

Bonds cannot defy gravity forever. While interest rates are low all over the developed world, a significant divergence in relative yield may well be the proverbial straw which breaks the camels back.

Two years ago I wrote about how a market needs only change at the margin. At the time I was discussing shorting the yen which we’d been short since 77 to the dollar. At the time it was just punching through 94 and Abe was just about to bring his padawan Kuroda onboard. It takes more than one meathead to do a decent job.

In that post I mentioned how the more levered a market, the less resistance there is towards a change in direction.This is why it’s possible for major changes to take place at the margin. When everybody thinks one way, who else is left to come to the party? The sovereign bond markets today sport these characteristics, and I worry that the results may turn out poorly. Perhaps really poorly especially for those holding European and emerging market sovereign debt.

The impact on the carry trade

Should the Fed raise rates in June, the impact on the carry trade will only be exacerbated.

We’ve spoken at length about the carry trade, both in our detailed USD Bull Market report as well as my explanation of the anatomy of a carry trade bubble. It’s important to understand how interconnected world markets are. Nothing happens in isolation.

Consider investors, hedge fund managers, pension funds, and other financial flotsam and jetsam will now have added incentive to pay back borrowed dollars after their forays into emerging market debt and high yield instruments. Not only has the yield differential moved against them as dollar returns on a yield basis outperform. Equally importantly, this itself will simply fuel demand for the already strengthening greenback.

A rate rise by the Fed will act as a margin call on carry trade assets as the yield differential widens in favour, this time of the dollar. This is why I fully expect some hair raising events in the 3rd and 4th quarters of 2015 as levered players who are currently coughing up blood actually die. It promises to be a good show.

I should point out that a strengthening dollar is deflationary on a global scale. I struggle to see how this is anything but bearish for commodities and commodity currencies.

This dollar rally and periphery debt default we’re expecting will set the stage for the Fed to eventually attempt to reverse the strong dollar, bringing about a rise in US bond yields and eventually a loss of faith in the mighty dollar. We have more of the show to enjoy though before we get there.

Chris has founded and built several multi-million dollar businesses in the investment arena including overseeing the deployment of over $30m into Venture Capital opportunities and advising family offices internationally. Prior to this, Chris built a career at Invesco Asset Management, Lehman Brothers, JPMChase, & Robert Flemings.
MORE ARTICLES »
PrevPreviousIs US Dollar Carry Trade a Menopause in the Currency Markets?
NextFaith in ChaosNext