Is This Why Mark Zuckerberg Chose This Country?

Dale Carnegie was a brilliant man. An intellectual giant with insights most of us will only dream of possessing. I read much of his works when in my twenties. His books are relatively small and I’d keep one in my coat pocket. When riding the train into London Bridge for work, it would often act as my refuge from my surrounding cattle-like conditions.

These were all too often worsened as, when only 10 minutes out of the station, some heartbroken office dweller would decide that another dreadful day in his cubicle was more than he could take and would leap in front of the train, thereby ensuring a lengthy reading time for me.

While in the midst of doing a bit of research on Latin America’s start-up scene for me a colleague when, not finding the information needed, picked up Carnegie’s book for a few minutes relating the following passage to me:

I often went fishing up in Maine during the summer. Personally I am very fond of strawberries and cream, but I have found that for some strange reason, fish prefer worms. So when I went fishing, I didn’t think about what I wanted.

I thought about what they wanted. I didn’t bait the hook with strawberries and cream. Rather, I dangled a worm or grasshopper in front of the fish and said: ‘Wouldn’t you like to have that?’

South American countries are engaged in increasing competition to lure some of the most promising start-ups to their shores. Chile and Uruguay have government-run programs that offer US$40,000 in free money to persuade entrepreneurs to move for a period of at least six months. While the programs are aimed at luring top entrepreneurs from outside their borders, the programs do a poor job in keeping entrepreneurs in their countries long-term.

TechCrunch ran an article on this very topic last year:

“After completing the 6 month program, nearly 80 percent of entrepreneurs left Chile, 34 percent of them for the United States, according to a recent survey shared with us.”

If you’re thinking about setting up some sort of dummy company and living large in Latin America for a few months I haven’t yet come across anyone that has beat you to it. Although, to be accepted into Chile’s program you have to prove that you’re doing, well… something.

Both Chile’s and Uruguay’s programs are in the nascent stages and only several years old but giving free money to promising entrepreneurs clearly hasn’t provided the dividends desired.

While Chile and Uruguay appear to be fishing – trying to poach the most promising start-ups – Colombia looks like it’s in the process of building a fish farm. As we’ve written about Colombia, we’re excited about this country and the direction it’s moving in.

It is rapidly turning itself into an attractive market by incentivizing hard science and IT-related education. As Mr Carnegie would say, a fish pond…

The Digital Talent initiative is churning out thousands of Colombians with post-graduate degrees in computer science and engineering programs. This is already achieving results and according to the government, between 2007 and 2012 the revenue of the IT sector in Colombia grew by 177%, reaching US$6.8 billion. Developing from the ground up or domestically, I believe, will go a long way to building a sustainable domestic economy.

Medellin is a city with a dark history but you wouldn’t know it. It is rapidly becoming a go-to destination for tourists, entrepreneurs and business people alike. The city is at the forefront of efforts to create an IT hub. Students can sign up for free after-school computer programming lessons and the city is working towards being a true English/Spanish bilingual community through the certification of 1,500 teachers to teach English in a $23 million program. At the center of the city is a remarkable organization – Ruta N.

Ruta N, who will be joining us shortly at our Meet Up, aims to be the biggest innovation cluster in Latin America and supports innovation related education and offices for companies ranging in size from multinationals to those participating in its accelerator (more about it here). Other privately run start-up accelerators are moving into the city and capturing the attention of Silicon Valley. espacio.co opened its doors in 2012 and has ties to the Founder Institute.

At the infrastructural level, the Colombian government has been making concerted efforts to build adequate market size. It’s spending billions of dollars expanding high speed broadband access to more and more Colombian communities. Colombia is also the place where Mark Zuckerberg launched internet.org earlier in the year. Soon, any individual with a cellphone in Colombia will be able to access the internet even without paying for data.

Where Colombia does invest in start-ups, it does so perhaps less haphazardly than Chile and Uruguay. And all funded start-ups are run by Colombians. Here’s The Atlantic on the topic:

iNNpulsa, housed under the Ministry of Commerce, Industry, and Tourism, works much like a bank, issuing government-funded grants to promising entrepreneurs in everything from health care to food production.

However, the more tech-focused initiative, apps.co, focuses on partnering with universities and private companies to provide seed funding, training, and mentorship to aspiring entrepreneurs. Working almost exclusively with entrepreneurs who want to build web-based applications, apps.co will give $33 million dollars to partnering accelerators and university-based entrepreneurship programs from 2012-2014.

According to Information Technologies and Communications Minister Diego Molano Vega, most of that money comes from taxes on foreign exports like oil and coal; about ten percent of that revenue is directed toward “innovation projects”.

Colombia doesn’t have the market size of Brazil, Latin America’s tech powerhouse that dominates news week to week, but ever so quietly Colombia is building the infrastructure for a really robust tech ecosystem. This is a country which in a decade is going to be completely different, and likely valued accordingly.

Colombia’s efforts to building this ecosystem caught our eye because the country has committed itself to a long term strategic vision and appears to be keeping to it. Instead of gimmicky handouts to the most promising foreign entrepreneurs, they are spending to ensure that individuals are equipped with the right skills and education, and that the marketplace is ready for them. Just recently, Medellin promised to spend a further $389 million towards “Medillinovation”. 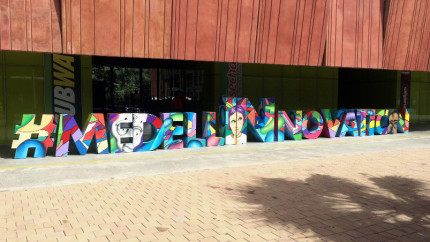 In Medellin, this vision is paying off with international recognition. In 2013, the city was named the most innovative city of the year by The Wall Street journal and CitiBank. The Cities for Life Initiative will be hosting its annual conference there this year.

Using Mr. Carnegie’s analogy once more; Colombia isn’t worrying so much about grasshoppers and worms for a fishing trip, rather about depth and size for its own pond.

“…the best possible way to prepare for tomorrow is to concentrate with all your intelligence, all your enthusiasm, on doing today’s work superbly today. That is the only possible way you can prepare for the future.” – Dale Carnegie

Chris has founded and built several multi-million dollar businesses in the investment arena including overseeing the deployment of over $30m into Venture Capital opportunities and advising family offices internationally. Prior to this, Chris built a career at Invesco Asset Management, Lehman Brothers, JPMChase, & Robert Flemings.
MORE ARTICLES »
PrevPreviousKISS in Colombia
NextWhile the World Watches Greece THIS is HappeningNext

It’s great to see the 3rd world aggressively invest in tech. It’s a shame that this is happening while our infrastructure crumbles here at home. I’m the founder of an etsy alternative marketplace and I consistently see new businesses sign up from around the globe. This just wasn’t possible 5-10 years ago.