One Jean-Claude Juncker, a disturbingly stupid man and also (more disturbingly) the head of the EU Commission is upset. 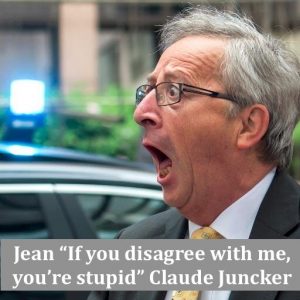 The list of countries to have exited includes Austria, Hungary, Bulgaria, Poland, Czech Republic, United States. Juncker believes they would not have pulled out of the pact “if they had read it”, his belief that the principals of “shared responsibility” would actually lead to less illegal immigration.

Perhaps because the document makes immigration a human right, therefore none would be considered illegal. However, it would realistically be far more migrants with none being considered illegal or able to be turned away.

On Wednesday the Czech Republic officially stated they were rejecting the Global Compact for Safe, Orderly and Regular Migration. The pact is due to be formally ratified in Marrakech, Morocco next month.

The concern among a growing number of UN member states is that the document declares migration “inevitable, necessary, and desirable” and makes signatories “commit to eliminate all forms of discrimination” including the promotion of “diversity”, enacting stiff penalties for “hate crime” and opening up welfare systems to all, including migrants without documentation.

Juncker in his speech at the SZ Economic Summit claimed that “stupid populists” in Europe have a “long list of accusations” for things they hold others, “especially Brussels” to blame.

It’s amazing how easy it is to promote the wellbeing of people when it’s not your bloody money that has to pay for said wellbeing. Luckily Europe isn’t dealing with a banking crisis. Oh, wait…

Juncker is 65 and so sadly for all of us, his greatest gift to the world (his death) is probably still some 20 to 30 years away. I’d rather an autistic raccoon was in charge. No, really.

If you’ve ever wondered, as I have, why Western Europe is so at odds with Eastern Europe in this day and age, then you may have missed my article dealing with the topic last week. Warning! Triggering of cotton wool clad softies may occur.

It’s Getting Hot in Here

Things certainly are heating up in France.

This is a number of things. Rest assured this is not just about taxes.

It’s also about an elitist scum pushing their will onto the people and making them pay for it, and it’s about people betrayed by their elected leaders, and it’s a pushback to what has become the status quo.

It’s about the spiral of downward mobility that Europeans are feeling. And it’s not like I never warned you about it. Heck, back in 2016 I laid out the 7 steps to the easiest short in history detailing what would come. Today we’ve seen some of it. The rest awaits us.

Or something else. I’ve my opinions but you decide.

Are You Feeling Weak?

And this week, another topic I’ve covered in the past is in the headlights. Shane Oliver of AMP does a great job of tracking all the data in this space. And it’s not all that pretty.

Australia really is a pretty darn unique and lucky country. And not just because they can boast to having Isla Fisher, but because, unlike literally anyplace on the planet, not a recession in 27 years.

Which coincides with real estate doing nothing but go up up and away for longer than anyone can remember.

Let’s say, for example, that you’re a “normal” guy or gal or Bruce or Sheila. After graduating uni or doing some form of tertiary education so you can pretend you’re not really a kid anymore, you’re probably mid-20’s. Throw a year or two in there to go see the world, drink far too much, and try not to get any STDs while simultaneously spending as much time horizontal as possible, you settle down and buy your first house.

You’d be late 20’s, early 30’s. Well, any Ozzies from the main centres such as Melbourne, Brisbane, and Sydney that have done that and who are not over the age of 60-ish have NEVER experienced a recession. And they’ve NEVER experienced falling house prices.

That’s really quite something, wouldn’t you say?

Chris has founded and built several multi-million dollar businesses in the investment arena including overseeing the deployment of over $30m into Venture Capital opportunities and advising family offices internationally. Prior to this, Chris built a career at Invesco Asset Management, Lehman Brothers, JPMChase, & Robert Flemings.
MORE ARTICLES »
PrevPreviousThe Curious Case Of Western Europe Vs. Eastern Europe
NextInsider Weekly: What Would Templeton Do?Next

[…] Jean-Claud Juncker is upset. And why Australia is a unique and lucky country. [Read more] […]