Laundromat Lessons: Surprise, Even Kids Can Be Taught About Finance

After showing you what an illiterate enumerate head of state looks like… and how goddam appalling that is, an irate reader was “triggered” and wrote in to suggest I provide answers to problems rather than just profiting from them.

“A greedy capitalist,” I believe, was the terminology used.

Maybe he missed the name of this blog, and probably… no, certainly he’s a moron, so fair enough. You can’t fix stupid, and I’m not here to try.

But today we’ll make an effort to fix a problem.

One problem that glares at us every time we hear from a politician is the complete and total inability to understand basic economics.

And it all starts with eduction, which we all know is horrible, and it doesn’t matter if you’re a Brit, a Kraut, a Yank, go by the name of Ivan, or your President just crowned himself leader for life. It’s all varying shades of urgh!

History is largely not taught, which means kids grow up with bugger all context with which to view what’s happening around them.

Math levels (unless you’re being schooled in Asia and you’re killing it) have been falling for years. Silly concepts like “no child left behind” and many like it, which entail giving Johnny Snotnose a ribbon for turning up and NOT having a tantrum, have infiltrated the system. And don’t even get me started on basic business or economics. 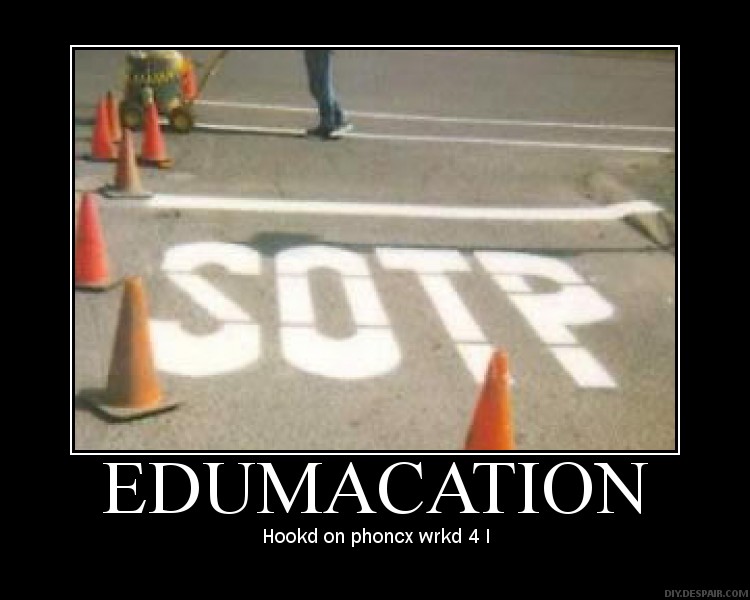 So here’s a simple story that you can, regardless of age, pack into your doggie bag and take home. Share it with your kids, grandkids, neighbours, and any friends who’ve got spawn of their own. Who knows, maybe a dent will be made and we all make the world a wee bit better.

How will you know it works? You won’t, but you can be confident that it’s been lab tested and the rats haven’t grown another head. My kids (the rats) figured it out and they’ve not turned into murderous rampaging delinquents.

If that changes, I’ll send an SOS and you can know we’ve all contributed in the making of monsters. Caveat emptor!

Economics of a Laundromat

Down the road from us is a laundromat. The sign outside promises a wash, press, and fold for $20.

“Whoah, no way!” my kids said after seeing the sign. Imagine that. We do washing ALL THE BLOODY TIME. We’d be broke.

Why, they asked, would anyone pay that much to get their laundry done (smug little ratbags)?

There are any number of reasons.

First and foremost, a washing machine will set you back $500 or more.

Maybe you’re really skint and you don’t have a spare $500. Maybe you’re on vacation or a business trip. Or even better, having a dirty weekend away with your significant other in which case you’re not about to spend $500 on a washing machine to lug about.

And so the utility value of being able to use one without owning it exceeds the value of owning one at a $20 price point… and quite possibly much higher. The fewer fresh clean clothes in your bag and the greater the stench, the higher the value of that wash press and fold will be to you.

And so I made my kids work it out.

Turns out that if you do your laundry twice a week (and I assure you, if you’ve got kids and your family are sporty, that’ll be bare minimum), at that rate you’ll have paid for a shiny new washing machine in 12 and a 1/2 weeks or just over 3 months.

And so paying $20 to turn a sweaty, stinking pile of laundry into a fresh, lavender-smelling pressed stack of clothes still then seems really expensive. And it is.

Now, a free washing machine to a couple of kids is about as exciting as a T-bone steak to a vegan, but they’ve grasped the concept of money, and here’s something that would provide them with a steady stream of the stuff. We’re making progress!

Me: “Ok, kids why not go into business?”

Them: “Can you lend us the money to buy the washing machine?”

Me: “Sure, but I’m going to charge you interest on the money.”

Them: [Frowns] (perhaps realising you don’t pay off the machine so quickly… I’m still not sure what’s going through their little heads right now)

Me: “This is what debt is all about. I’m going to take the asset away from you if you can’t pay me back my money and interest in time.

Furthermore, I’m going to charge a very high rate of interest… 30% a month. It’s called loan sharking. After all, the junk bond market is a notoriously expensive place (figured they may as well learn that now).

And of course, you’re unproven entrepreneurs, which equals higher risk. Not only that… you’ll not be working on this full time because you need to focus on your schoolwork too and myriad other activities you’ve committed to. So really I’m being generous here if I’m rating this bond as CCC.

Remember a used washing machine is worth half what I’m going to pay for it on the second hand market. I’ve got to account for that risk.”

Them: “Is there any other option?”

Me: “Not necessarily better but we could do this. I provide all the cash, buy the machine, and you guys operate it, do all the marketing, manage the buying of detergents, ironing, and so forth.”

Them: [Being suspicious of their greedy, nasty capitalist father] “Oh-kaay, so we don’t have to pay it back?”

Me: “No, but I get to keep half of the profits. I’ll let you guys keep the other half. But you have to do ALL the work. I do none, zero, nada work. I just provide the money.”

Them: [Screeching like wild banshees] “Not fair! Urgh! No way!”

Them: [After scribbling and stabbing at the iPad] “Well, at $80/day in revenue we only get $40, but if you lend us the money we’ll make much more.”

Me: “That’s called equity. You’ve just sold a 50% equity stake in your business (they’re beginning to realise the value of their business and that selling half of it when debt finance is available isn’t a good deal).

You’ve not got any risk to losing it all because we’re all equity holders, whereas when I was lending you the money, in reality I owned the asset should things not work out and then you lose your business.”

Then I made them look at the business with some level of scale because let’s face it, even though they’re just kids nobody in their right mind wants to have a laundromat with only one machine operating. In fact, you’d want a fleet of laundromats but that’s a lesson for another day.

Here’s a snapshot of how they looked at it: 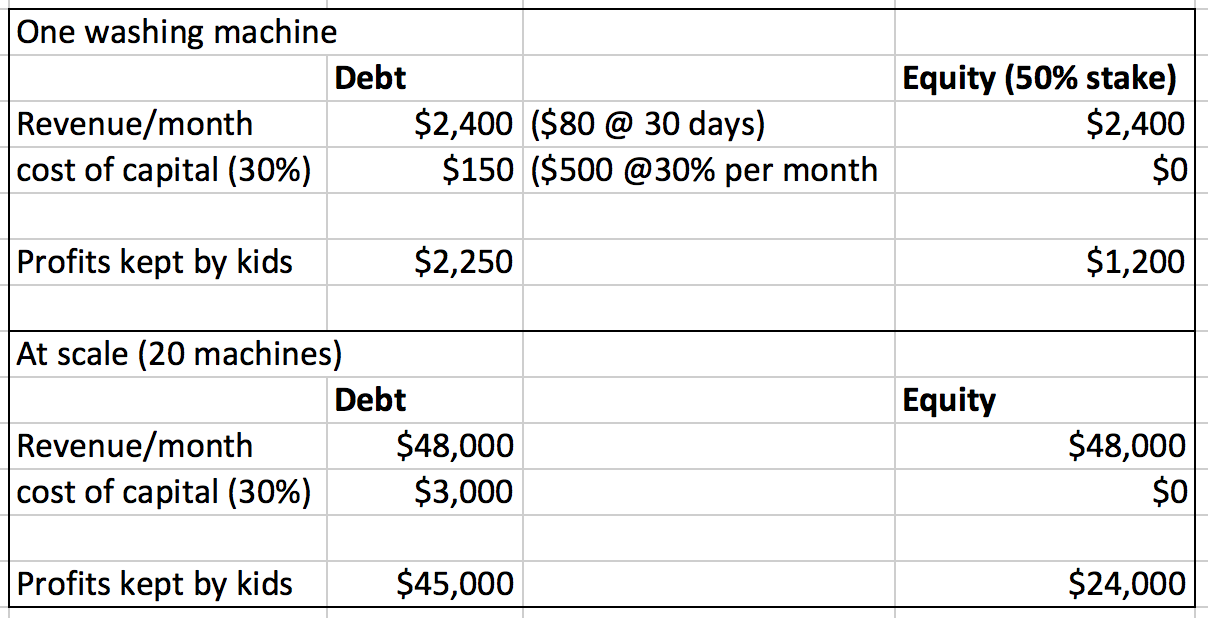 What they learned was that clearly you’d not finance a laundromat business with equity capital if you can debt finance. Now, not all businesses are like that, of course.

They also realised that over time you want to move towards reducing debt because it decreases risk in the business. What if you’re running your laundromat in a holiday resort area and it has massive flooding wiping out the tourist season?

Isht happens. It’s better if a company can withstand that sort of thing.

As investors we look at the same equation but from the angle of being a capital provider not a business owner. If it was me, I’d rather have a 50% stake in the business and then lever it up within reason.

From a business owner’s perspective this is a fairly rational way to look at things.

Grow using debt, take risks early on and let the debt holder carry those risks. Once tested and established, combine debt to grow with a reduction of debt overall in order to manage business cycle downturns and then, as you get more established, restructure debt servicing costs to more favourable terms.

Now, here we’re looking at a business which has tangible assets, thus easy to borrow on. There are thousands of different businesses and so naturally some don’t have any tangible assets, and as such you’re more likely as an entrepreneur or business owner to have to sell equity.

The point is this: there are different parts of the capital structure and as investors we need to both understand what they are and when we’d rather be in one or the other.

There are different parts of the capital structure. As an investor, you need to understand what they are and when you'd rather be in one or the other.Click To Tweet

Is one better than the other?

Additionally, it depends on where we’re at in any economic cycle.

Take the late stages of any business cycle. You’re far better of owning bonds than equities.

And you can take this a step further when explaining to wide eyed kids what communism, socialism is, and capitalism is.

You see, in communism none of this exists. There is no capital structure. There’s just one group at the top, they own everything and convince everyone else it’s in their best interests that things are this way. Everyone else can only afford one pair of underwear while those at the top have theirs handmade from imported Mongolian yak fur flown in via private jet.

In socialism those at the top convince everyone else that they deserve things which they’ve not worked for, and that those who do work for it are better off giving much of it away to everyone else, while clipping the ticket on the entire transaction.

“But why, Dad,” Johnny might ask, “don’t you buy them yourself and rent them out?”

Ah, see… Now we’re making progress because without even explaining to little Johnny that communism and indeed socialism, which is watered down communism, bring us bad service, grimy food, and high prices, Johnny already has some context as to why this is so blindingly obvious.

“Education is the most powerful weapon which you can use to change the world.” — Nelson Mandela

Chris has founded and built several multi-million dollar businesses in the investment arena including overseeing the deployment of over $30m into Venture Capital opportunities and advising family offices internationally. Prior to this, Chris built a career at Invesco Asset Management, Lehman Brothers, JPMChase, & Robert Flemings.
MORE ARTICLES »
PrevPreviousThis Giant Industry Is Starving For Capital
NextHow To Triple Your Share Price In Two WeeksNext

Laundromat Lessons: Surprise, Even Kids Can Be Taught About Finance - Alternative Report

Laundromat Lessons: Surprise, Even Kids Can Be Taught About Finance – Holy Day Hill