We Have Met The Enemy… And He Is Us

Warning: I’m going to jump all over the show today. Live with it.

When your umbilical cord was severed, and you’d only just entered this world, you had approximately 100 billion brain cells. At some point in the future (hopefully very distant), an old man in sturdy boots and a trench coat will throw dirt on you and there’ll be a whole lot less.

Our cells fizzle and die slowly during the course of our life and then much more rapidly until we’re gone. It’s basically Black and Scholes inside our skulls.

The thing is, based on the sheer number of neurons we arrive on this planet with, we should all be geniuses at birth. We’re not.

It takes a good number of years for us to figure out that we shouldn’t stick our bits in a toaster… or chew on barbed wire… or play with electricity in the bath while a 2 year old would have no problem thinking those are perfectly reasonable things to do. This is despite the fact that at age 2 our brains are about 80% of the size of a fully grown adult and about 85% by early childhood.

The reasons for this is due to the connections made between neurons – synapses.

When we’re only 2 years old, we’ve not made and strengthened these necessary connections in our brains. A child’s brain actually has twice as many synapses as an adult’s brain, and in a process called pruning, the neural connections that are used and reinforced most often — like those used for language — are strengthened, while the ones that are not utilized as much fade and die.

It’s not, therefore, entirely about the number of neurons, but rather how they’re trained to connect and the consistency of that training.

The more connections made with regularity, the more adept we become at whatever that connection provides. If it’s a series of connections allowing us to speak a language, then it’s no surprise that a 2-year old still struggles while a grown adult manages the task perfectly well while driving a complex machine down the freeway and munching on an apple.

It also explains why a relatively dim Joe Sixpack can be trained to perform a complex task and execute it efficiently (provided he’s experienced sufficient repetition of the task). This could be a task which a genius, at first crack, may underperform at.

It’s true. Repetition is indeed the mother of skill.

As investors we should try to remember this.

The terrible twos are pretty awful. You know why?

Because at this age we start developing the synapses that allow us to experience emotion. Emotions such as frustration.

So you know what we do?

We practice those emotions. After all, if we’re to control them we need to strengthen them. It’s just a bit of a “terrible” experience for those around us while we’re busy “practicing” frustration. But only once we’ve mastered those experiences and more fully developed, those connections do we begin to learn how to actually control them.

It’s a bit like hopping into a supercar when you don’t really know how to drive. At first, you’re a wee bit out of control, careening all over the place and figuring out how the accelerator works and the breaks and so forth. Eventually, we get the beast under control and we’re off.

As adults we can all lapse under stressful conditions.

Have you ever been running late for some important meeting and you can’t find your car keys?

You go into a whirlwind rush. Blind panic. Where the fffff are my keys???

Your darling loved one answers with, “but I told you to put them on the hook.”

Don’t tell me that. Just help me find them.

What’s happening in your brain is that your rational brain has completely shut down at this point. In this state you simply can’t function rationally. The 2-year old has taken over, and only once you’ve calmed down can you go about searching for your keys… thinking rationally where you had them last and so forth.

You’re literally returning to what a 2-year old experiences when they’re still developing those neural connections and haven’t fully developed them yet. The 2-year old brain doesn’t understand context. It’s reverting to our primary DNA, which actually tells us that we’re going to die.

So what does this have to do with investing?

Well, I was thinking about this all as I wrote the weekly Insider subscription letter. Take a look at this. 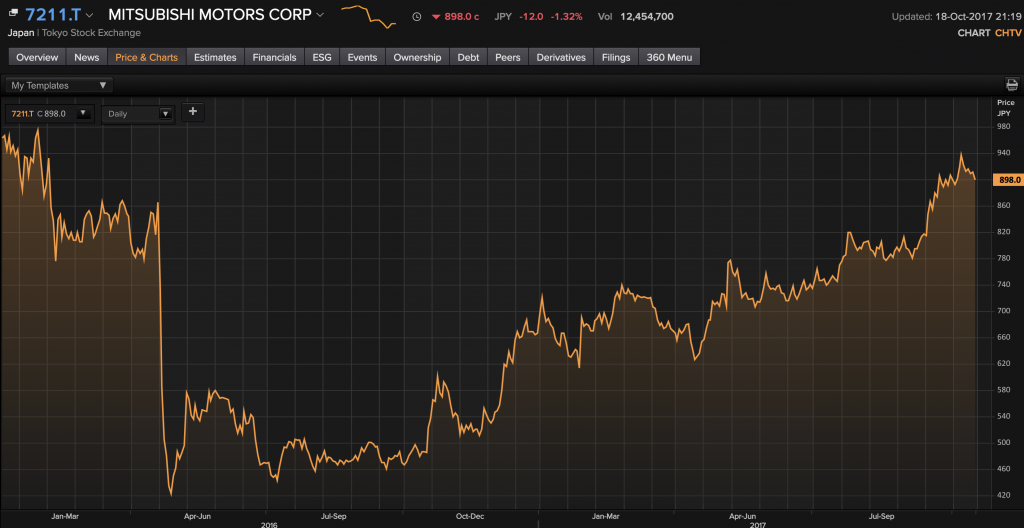 On the 19th April of last year, after hearing the news that Mitsubishi Motors Group had “doctored” some of their fuel efficiency datam a number of investors went all 2-year old. Their brains reverted to our most basic DNA and yelled “I’m going to fu****g die”, their reaction being ironically somewhat self-fulfilling.

Proof that we can go from rational to 2-year-old in the blink of an eye.

Investors can go from rational to 2-year-old in the blink of an eye.Click To Tweet

You only needed to wait for one week to find the bottom.

I alluded to it in a post about the land of football, gorgeous women, and trading opportunities in May of this year.

And here’s what we did — an excerpt from the Insider trade alert:

Of course, you could have just bought the ETF itself. Very vanilla and something a trained monkey could do.

Are we super genius?

Hell no! We just refrained from going all 2-year old, took a breathe, and put things into context.

There’s another side to this.

Have you ever been driving along behind some old dotty goat who’s trawling along well BELOW the speed limit? You’re agitated and then excited when you see that just ahead the lane goes to double lanes. Ah… at last a chance to drill past old Betty in her Suzuki snowflake, 1-point-nothing tin can that’s been annoying you for ages.

And then, we all know what happens next.

Here comes the double lane and Betty, bless her socks, suddenly guns the car and is now going OVER the speed limit. Whaaat??

There is a reason for this. It’s all about our DNA.

Back when we were restless creatures scrubbing for roots and berries our social status could have meant the difference between survival and death. It was pretty important that our social status remained as high as we could get it. Those at the bottom of the social rung could quite literally starve. Not pleasant.

Today, we’re not going to starve but our DNA doesn’t recognise that. It still reacts the same way.

We see this in any bubblicous market. In fact, I was cutting my teeth in the investment banking world in London during the dot-com boom and truthfully never understood at the time what was going down. (gimme a break I was just 20-something).

EVERYONE was getting in on the IPOs and making fortunes. It was as much a social status activity as it was about making money. NOT participating meant that you were old Betty getting overtaken at speed. Not good says our brain.

There is hope, though.

Don’t drive yourself around the bend letting your 2-year-old brain run the show. Breathe, relax, and put everything into context. Most of the time you should be doing nothing at all except observing.

“Resisting temptation and instilling self-control are general human goals, and repeatedly failing to achieve them is a source of much of our misery.” ― Dan Ariely

We Have Met The Enemy… And He Is Us - Alternative Report