Frontier markets and volatility go together like bacon and eggs. Bursting with energy, chaotic and often smelly they lurch about like a young calf finding its legs.

Mongolia could quite aptly be seen to be such a calf. Sometimes the calf lurches about and remains standing. Sometimes it falls over. Two years ago Mongolia fell over.

To understand what originally drove Mongolia’s economy to post a blistering 17.3% growth rate in 2011 we need only look at the $6.6 billion investment into stage one of the enormous Oyu Tolgoi copper-gold project. OT, as it’s known, is owned 34% by the Mongolian Government with Turquoise Hill (TRQ) owning 66% of the project. Rio Tinto in turn controls TRQ by way of their 51% stake in TRQ.

To understand why TRQ came to be valued like Uber we need to understand that the Oyu Tolgoi mine is expected to produce as much as 195,000 tons of copper and up to 700,000 ounces of gold in concentrates next year. At current prices this equates to $846M of gold and $1.2B of copper.

In 2011, however, gold was trading at $1,800 and copper as high as $9,555 per tonne while today gold trades at $1,200 an ounce and copper $6,200 per tonne, so we can see that with those numbers another $1B would have been added back in 2011. You can see the graphical representation of TRQ’s share price together with the price of copper during this time frame. 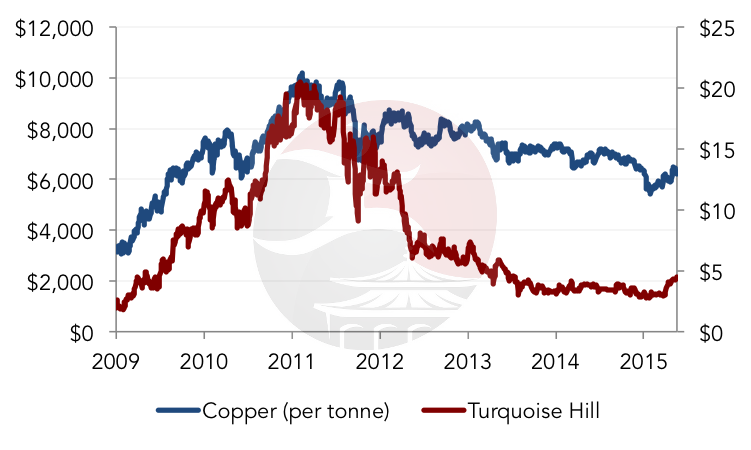 Now, anyone paying even a modicum of attention will see that TRQ has been oversold based only on the metrics of the copper and gold price. To understand why today TRQ is valued at just $9B and why the Mongolian economy has suffered while such riches sit on their doorstep we need only turn to – you guessed it – the government.

The Government of Mongolia managed to grind the project to a halt for 2 years as disputes raged. I won’t go into all the details, as there is ample commentary on the internet about the dispute. Suffice to say that government by their very nature are parasitic entities, most of whom are about as practical as a curly ruler. In this respect the Mongolian government did not disappoint, holding dear to some of the central tenets of the state everywhere, namely economic ignorance and plain stupidity.

What followed was a deafening roar as you could literally hear the money packing up and leaving on flights out of Chinggis Khaan airport. FDI collapsed to just $400 million last year, down from $4.5 billion in 2012, and the local currency, the tugrik, got body-slammed, falling from 1,200 to 1,900 against the dollar.

Fast forward to present day and the new president has just signed a landmark deal finally resolving all issues with Rio Tinto.

We have deep connections in the country and have a constant feed of information, and just over a month ago we received advance notification that things were turning around in Mongolia. I also hopped on the phone with our friend Harris Kupperman, the CEO of Mongolia Growth Group, to get his take on things. I recorded the call which you can listen to below.

When I wrote my last post on the topic I mentioned that we were picking up some TRQ which was then trading at $3.73. Today at $4.50 a few weeks later we have to ask ourselves the obvious question: Are we on the brink of another run? While I’m not going to scoff at over 20% in just over a month the truth is we don’t invest in frontier markets for 20% gains. We invest for thousands of percent gains.

Even though Mongolia fell over, like most calves, it is likely it will get back up again. Right now the odds seem to be decent that it is indeed doing so. It may be time to take a deeper look.

Assets are dirt cheap, the currency has been crushed and it looks like we’re about to have the $5.4 billion underground expansion of the OT project finally proceed.

We’re currently holding onto a small illiquid but traded company which has been growing 40% YoY in a really tough market for the last 2 years. They’ve been hit by the foreign exchange collapse but when, or indeed if capital begins coming back into the country then it’s companies such as this one which have the potential to really fly.

We’ll have more on this topic and what we’re looking at there in the future.

“In value investing, money is made after the crash, not before.” – Mark Mobius

Chris has founded and built several multi-million dollar businesses in the investment arena including overseeing the deployment of over $30m into Venture Capital opportunities and advising family offices internationally. Prior to this, Chris built a career at Invesco Asset Management, Lehman Brothers, JPMChase, & Robert Flemings.
MORE ARTICLES »
PrevPreviousYou Cannot Go Unprepared into This
NextIn Support of Ubers of the WorldNext

Interesting. There seems to be optimism. Kyrgyzstan also has a huge mine (Kumtor) and that constantly creates all sorts of problems. Its never ending. Kumtor has been operating for a while. Last PM resigned mainly because of Kumtor. OT is new, everything can go smoothly, more or less, but I very much doubt it. Mongolia still is a frontier market, there is poverty and corruption. Lot of money can influence people in positive and negative ways. Mongolian PM has lot of nice things to say, that’s what politicians do. Question is whether he has the influence to carry out, and to also keep his job secure. Not easy. PM’s change, voluntarily or otherwise.
The economy is probably also hard hit by the situation in Russia – decline in remittance, migrant workers returning…

There has been a lot of positive postings about the Oyu Tolgoi Mine coming to the table with the Mongolian Government signing the expansion agreement for the U/G Development. What is not mentioned is that at the end of May, 300 Contractors and 300 Company Employees from the Surface Operation are going to be laid off. The results of the U/G agreement will probably not be felt until early 2016 or later. While this is a step in the right direction the celebrations should not commence yet.

Not Your Kind Grandpa — Capitalist Exploits

[…] you’ve been reading my thoughts for any length of time then you’ll not be a stranger to Harris Kupperman (Kuppy). He is good friend and one of the sharpest guys I know. He’s a “hedgie” as well […]

Not Your Kind Grandpa - Alternative Report

[…] you’ve been reading my thoughts for any length of time then you’ll not be a stranger to Harris Kupperman (Kuppy). He is good friend and one of the sharpest guys I know. He’s a “hedgie” as […]