Years ago it seemed that when you hit 65 you’d retire, receive a gold watch, and proceed to spend your pension money on a rocking chair and pot plants. Ten years later you’d be in a box and, since pot plants are cheap, the cost of keeping you alive wasn’t prohibitive.

Not anymore. Today things are different. My wife belongs to a running club and there are a bunch of octogenarians there who put us both to shame. Nope, today you retire and spend your pension on kickboxing classes and second wives, with no plan of dying anytime soon.

This is really bad news for pension schemes across the developed world. Longevity is a problem when you can’t pay for it. 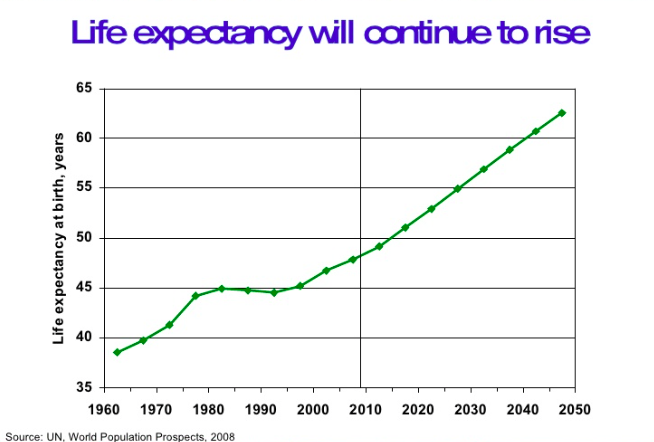 Maybe, just maybe, we could keep Mabel and Bob around for 10 years of re-used tea bags and pot plants, but not 20 years of kickboxing.

A suggestion put forward is that young people will simply have to hand over three times as much in taxes and work in their cubicles until they’re 123 before collapsing from a heart attack, clutching their overfilled catheters. At the very least, we’ll have robots changing their nappies though this doesn’t seem like a credible solution.

The fundamental problem with pensions is that you’re saving for old age diapers, pot plants, and rocking chairs by handing those savings over to entities whose mandates force your capital into asset allocations that no longer make sense. Why, oh why would you buy a European government bond for a negative yield just because the rating agencies still class it AAA and your fund mandate says it’s OK?

For those who still watch TV, I’m told that every night is littered with advertisements for pension companies. Those pension fund companies, sucking in your pot plant money, are actively seeking more suckers so they can move into shinier, taller office buildings in the most  sought after part of town where they will hire more executives to help plan more adverts to bring in more money from more suckers.

But we’re not living in 1964 anymore. Technology has evolved and today I sit writing to you from a home office in a place of my choosing. I manage my wealth from this location but in truth I can -and often am – anywhere. I have friends, colleagues, and clients with multi billion dollar family offices who operate in much the same way. No shiny office buildings on the expense column. The shiny office buildings are there but they’re leased to, you guessed it, pension and mutual funds.

Remember: pension funds are the dumb money. Smart investors watch mutual fund flows in order to know where the dumb money is moving to and there is no better place to watch than these guys.

And the government’s even worse. They promise to take our money and return it to us in the future but instead use it to bomb sand on the other side of the world. It’d be better if they just used it to buy a boat and go fishing on weekends. At least then we wouldn’t get the blowback of disastrous foreign policy I recently discussed in the 7-step blueprint to the easiest short in recent history.

Every new election cycle, no matter where you live (unless perhaps it’s Kabul), your government will promise you greater security at less cost and they’ll promise to protect pensions.

Expecting your government to ring-fence pensions for protection is as silly as thinking your road tax goes on the roads. It doesn’t. It’s spent on a legion of new civil servants so that the government can live up to their other promise of job creation. “Look, we just created a gazillion new jobs right here and look at that increased GDP.”

Don’t be disheartened though. There is good news. According to a study published in the Journal of Epidemiology & Community Health delaying retirement increases life expectancy. Clearly we just need to keep working.

Our stern faced suits seem to be pushing forward without any credible plan implemented and if history is any guide – and it is – then debt and taxes will be tried first. And this brings me to debt.

Before the crucial demographic tipping point is even directly upon us those stern suits have racked up an unconscionable amount of debt.

According to a Citibank report, the total amount of unfunded government pension liabilities in OECD countries currently stands at $78 trillion.

In US dollar terms, we estimate global retirement underfunding sitting on government balance sheets for these twenty countries to total $78 trillion, compared to reported national debts totaling $44 trillion. Therefore, if the liabilities of social security and public sector worker underfunding are added as a form of ‘contingent debt’, total global government debt may be three times as large as people currently think it is. Whatever the calculation used, the numbers are staggering.”

And by the way, this figure isn’t included in public debt to GDP ratios. You know, those ratios that everyone has been wringing their teeth and gnashing their hands over?

That figure (the debt to GDP for these OECD countries) stands at $44 trillion, nearly half the pension liabilities. To understand the real debt we need to add the two but in truth it’s meaningless. None of it is getting paid back!

You could take up smoking and junk food, hastening an early heart attack. Or you could take control of your own finances, save like hell, watch the markets like a hawk, and position yourself for the inevitable.

Many will label me a rich parasitic capitalist for saying this and they can eat sand because the truth is I expect to make a fortune over the coming decade from this folly and I sincerely hope you do too.

“Fund flows really come in handy. How you can really document that is to look at the mutual fund flows because you’re tracking the worst investors on the planet.” — David Hay, CIO Evergreen Capital Management

Chris has founded and built several multi-million dollar businesses in the investment arena including overseeing the deployment of over $30m into Venture Capital opportunities and advising family offices internationally. Prior to this, Chris built a career at Invesco Asset Management, Lehman Brothers, JPMChase, & Robert Flemings.
MORE ARTICLES »
PrevPreviousWorld Out Of Whack: Another Cog In The Exploding Resentment Wheel
NextWell “Worth” ItNext