Then go nowhere near this baby. The penny stock mafia are at it again. Even with my vigilance about not having my email address floating around the cyberwebpipes I still get spammed. Here’s the copy:

What Are You Waiting For?

The NDDG mobile app is being downloaded on everyone’s phone and could be acquired for billions by Facebook, Google or Yahoo!

You can share in this potential whirlwind of profits by investing in NDDG today. Your biggest potential for the largest monetary gains is investing in the earliest possible round of a growth company like NDDG.

Smart money ALWAYS EARLY. Will you act now- before the stampede of latecomer investors that will arrive in a few weeks?

Why is Nudg Better Than All The Other Social Apps?

They have combined the very best features from the leading peer-to-peer communication applications; stripped away any annoying nonsense which people just do not like, and built an easy and fun to use social connection system.

Imagine, being able to connect with friends and family with the unique ability to easily segment specific people into different circles (like Google Plus).

You’re out and about, have some extra time and would like to meet with like-minded person…

No problem, Nudg will locate people within your geographic vicinity, in a similar state of mind, and make it easy for you to connect.

Wait, it’s time to call mom who’s baking cookies in your hometown. Just use Nudg to make a free call anywhere in the world.

Want to keep in touch with all, or specific groups of people? They call this “Circle Functionality” — just choose the appropriate circles(s) and interact as you would use Facebook (AND with full privacy options).

Make Sure NDDG is on your Radar Screens

Lionsofwallstreet has been compensated ten thousand dollars for email advertisement

Where do I start?

Why the beginning, of course! This was sent from lionsofwallstreet@gmail.com. Wonderful! Immediately I know that these guys are so professional they’re using a Gmail account. I’m encouraged already.

Next, the ticker is linked to this article. Some little snippets which a 10-year old should be able to pick out easily. I know since I printed this out and handed it to my 9-year old son and asked him to find out what could possibly be wrong with it.

Combining geolocation and gaming functionality within a social network, the Platform will initially launch as a mobile device app for iOS™ devices. Users will soon be able to download the gaming iOS™ app for free from the Company’s website, www.nudg.com.

OK, so my 9-year old son tells me that this sentence means they don’t seem to have the product completed yet. No… Wow, we’ve got a publicly listed company that does not yet have a product. Is this what they mean by getting in early? …As in before they’ve developed anything?

Let’s take a look at the next line:

OK, so the company plans on doing some basic tests. Great! This means they’ve not done any yet. No worries, this is why getting in early makes sense, right? Imagine how valuable the company will be once they’ve done some tests, unless… Never mind.

The second feature announcement is a guaranteed revenue split with third-party developers. This will ensure that independent computer programmers receive financial compensation for building Platform features and plug-ins. The Company will provide details regarding the self-serve advertising portal and revenue-split for developers shortly after the Platform’s initial launch as an iOS™ mobile app.

Let me put this into English for you: We don’t really have anything developed or even developers so we’re going to get other people to do the programming. I’m intrigued as to why developers would split any revenue on something they 100% built themselves, unless… Ah, forget it.

Next they tell me there are 62 million internet users in the US. They forget to mention that none of them will be using this not-yet-built app, by not-yet-announced third party developers, who are to be sharing in not-yet-earned revenue, but that would confuse things for the “ALWAYS EARLY” smart money.

I took a quick look at the quote screen and chart: 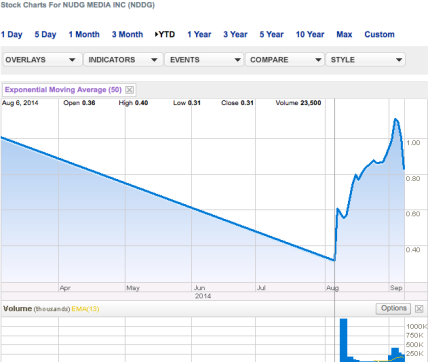 Yep, some poor saps decided that they were going to be “early” and whoopee, they’re now in the process of getting dumped on. What’s that about fools and their money? Then I looked at news feeds right below the stock chart:

Nothing to see here. I’m sure it’ll be fine, really. Who needs filings anyway when you’ve got promotion, right?

The troubling thing here is in the fine print right at the end of the original email diarrhea which found its way past my spam filters. Someone actually paid $10,000 for this article to be written. Go read it again and tell me, does this look like “literature” worthy of $10,000?

I mean, I’m all for fiction, but really…

“Two things are infinite: the universe and human stupidity; and I’m not sure about the universe.” – Albert Einstein

Chris has founded and built several multi-million dollar businesses in the investment arena including overseeing the deployment of over $30m into Venture Capital opportunities and advising family offices internationally. Prior to this, Chris built a career at Invesco Asset Management, Lehman Brothers, JPMChase, & Robert Flemings.
MORE ARTICLES »
PrevPrevious6 Ways to Improve Decision Making
NextRound 2 for the Japanese YenNext