Today I’m sharing a question from a subscriber:

Love your work and it’s been making me money but your case for the new service with Jamie focussed on private placements in resources is hard for me to digest. I used to follow (name redacted) as well as a few others (they’re all the bloody same really) and god I hate them all now. I lost so much money following them year and year after year. The never ending stories that the end of the world was nigh and buy gold and so on. I realise after being with your team for nearly 2 years now that you’re professionals, agnostic, and only interested in positioning correctly. So my question is. Why now?

I usually cover members’ questions in the monthly Q&A. But I decided to share this one with you.

Let me start by saying that I’m no expert in the resource industry. What I know about geology, for example, can fit on a post-it note.

I’m a macro guy. Looking at dirt isn’t my skillset.

Unless you’re a geek interested in rocks (and I’m not)… my brain begins to shut down after a while. And you’ll get the same expression from me that I reserve for red traffic lights.

I mean, I’m not stupid, but at some point it all becomes a bit much. And unless I can take the information and turn it into money, what’s the point?

I’ve the same problem with technology.

Geeks love the tech. They’ll tell you all about how many giga-this-that-or-the-other can make a piece of software do things that the would make Einstein slack jawed. And yet here I am and I couldn’t tell you how my toaster works.

Experts are very useful. But we need to be careful WHEN to use them and rely on them only for what we need. Because, let’s face it, without their knowledge we’re worse off.

Ok, so there’s the ever present problem of folks with no skin in the game flogging doom and gloom or whatever their marketing department decides is the go.

The problem, aside from being wrong, is that even when the given market goes up in price, it’s entirely possible, even probable, they’ll have no idea why… or when to get out.

So if we cast that lot aside we’re left with those who are true experts. Geeks, if you will.

The problem with geeks or experts is twofold:

Recently I sent my car in for a service. When I came to pick it up, I attempted some small talk with my mechanic. I asked him what he thought of the auto sector in general and the impact of EVs on the space.

And you know what? I may as well have asked Paris Hilton to solve the integer factorization problem.

He just stared at me with this nobody-home look.

I knew instantly my mistake.

He’s an expert in the workings of cars. If I’d asked him about my car’s engine, on the other hand, he’d have had no trouble at all boring me to death with a discussion about the drive train, alternator, head gasket, timing belt, carburetor, distributor, amount of torque, and god knows what else. And then I’d be back to my red traffic light expression.

So this is just to say experts are super useful, provided we’re not looking for them to do a job that quite frankly isn’t theirs to do.

Which brings me to the question.

Certain assets become valuable at certain points in economic cycles… which is another way of saying that financial markets are dynamic, not static.

One thing to look at is, of course, supply and demand factors.

You’d think that would be one reason for commodity markets to run stable around some equilibrium point. All, or at least many, of the known supply and demand factors are known most of the time.

Yet nothing could be further from the truth. And these markets, just like any other sector, can… and do often pull waaay beyond “equilibrium”.

Here’s the iPath S&P GSCI Total Return ETN, which I’m using as a proxy for resources, though it’s fairly heavily weighted in energy.

In any event, it explains very well why folks hate anyone who sold them a story related to resources over the last 5 years or so.

If you pay close attention, you’ll notice that it bottomed about the same time that the bond market peaked back in mid-2016.

And the same is likely going to be true at the other end of the spectrum.

Here’s the PowerShares QQQ ETF, which is as good a proxy of the FANGs as you’re likely to get.

That’s some serious bull market right there. The problem, as I see it, is that markets are forward looking and valuations run ahead.

I recently suggested social media related stocks may not be the best place for your capital going forward, and I still think that’s the case.

Take the folks ploughing capital into WeWork at an eye-watering $35 billion valuation — a company, I’ll remind you, combines its fast growing sales with accelerating losses.

WeWork had total revenue of $886 million but a net loss of $933 million last year, and has also committed to pay $18 billion in rent in the coming years for the buildings it currently leases, $5 billion of which will be due in the next four years.

This is a company heavily reliant on the capital markets.

It’s also a company that, if we’re being honest, is not much more than a real estate leasing company dressed up as a tech company. For a business model at the tail end of a bond bull market that presents some issues. Maybe it keeps going but, like Tesla, I ask, where’s the upside?

Now, I’m not smart enough to know when the FANGs roll over, and I only very very rarely short but the point is we’re not long FANGs either.

Markets move in cycles and asymmetry is almost always inversely correlated with popularity.

Markets move in cycles and asymmetry is almost always inversely correlated with popularity.Click To Tweet

And here’s one more pretty chart from Jeffrey Gundlach that explains why we think the timing opportune for private placements in the commodity space. 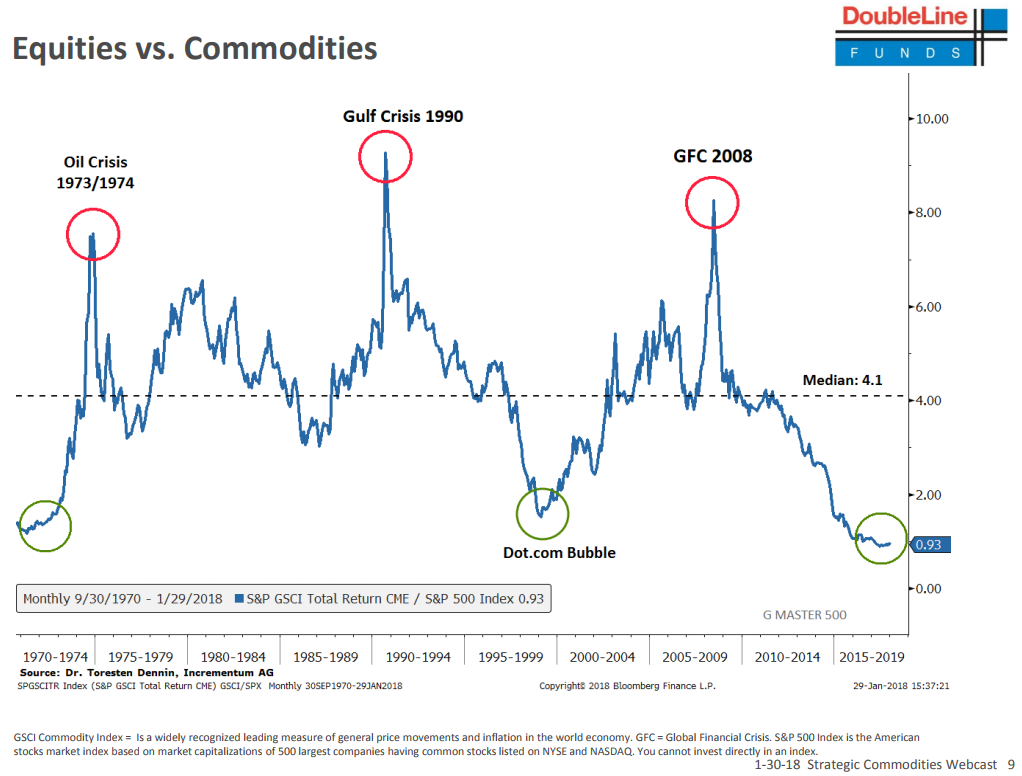 The experts can help us understand what to do at each stop on the journey, but it’s probably a mistake to let them drive the bus.