Sam Zell May Be Onto Something Here

Many, many years ago on a flight from New York to Vancouver I recall sitting next to a C-level executive from a pharmaceutical company which conducted business “globally,” as he put it. “Global” being, as it turned out, the US and Canada. I had to humbly submit to his “international experience.”

Upon hearing of my origins being Africa, he launched full-steam ahead, educating ME about Africa. Before I completely tuned out and started searching for the air hostess to see what hard liquor was available, I learned that Africa was ONE place. Of course… how foolish of me to think of it as a continent of 53 (if we include the islands) countries!

I also learned about the huts that we all lived in, and the wildlife (of course, the wildlife). Wildlife which littered the place like politicians litter the streets of DC. It all sounded tremendously exotic and I was eager to experience it!

I was reminded of that conversation the other day when reviewing some of the statistics on Latin America’s fastest-growing economy, and conversations I’ve had recently with investors while discussing Colombia.

To the uninitiated, Colombia is seemingly an equally misunderstood place… as misunderstood as my travel companion’s understanding of Africa. It is presumably wallowing in grinding poverty, social decay and despair, with gun-toting guerrillas on street corners, and mafioso shaking down every oxygen breathing organism.

I’m very fortunate to have such a diverse and knowledgeable global network, both within our team and indeed extending out to the readership of this blog. Long-time readers may recall that Mark lived in South America for years, and has traveled Latin America extensively. We also now have a member of our team putting longer term boots-on-the-ground in Colombia in order to further develop our existing network in the country.

What has caught our attention are some of the following cold, hard facts: 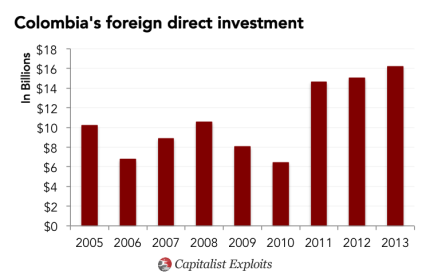 This is balm to an investor’s soul. What is even more interesting than the gorgeous Colombian señoritas is the fact that very little leverage exists in the real estate market. The domestic finance market is underdeveloped, and much of the real estate changes hands on a cash basis, or with owner financing.

In case you’re thinking that gringos have already have bought up all the real estate… less than 1% of Medellin real estate is taken up by foreign investment. We, like Sam Zell who is investing heavily in Colombia, suspect this will change.

What we like to look for in a real estate market is not just relative value, comparing cities around the world on a square metre basis or even build cost, for example. Instead (or at least in addition to the standard metrics), what we really like to see is a rising middle class, preferably combined with low levels of leverage, which often is a result of a pubescent finance and banking sector. Colombia sports all of those!

Human nature rarely changes, regardless of what country you’re looking at. We all want a home to call our own, have our kids spill food on our own carpets instead of a rental (crazy, I know), and this is typically the single most important purchase the middle class tends to make.

As I mentioned last week, safety has dramatically improved in Colombia and, while not as safe as a Volvo, it’s certainly not as dangerous as a tuk-tuk. Though, when looking at real estate prices the market appears to be priced as though it’s as dangerous as a tuk-tuk being driven by an underage Mumbai teenager full of beer which, if I’m not mistaken, many US cities seem to be looking like! Baltimore being the last, unfortunate set of fireworks.

The funny thing is, if I was to ask Baltimore (or Chicago, DC or Detroit) residents what they thought of moving to Medellin, Colombia the odds are high that not 1 in 10 would make the move, and most would think it more dangerous than their current environs.

We’re looking forward to getting real-time feedback from within our own team on Colombia, and we will be sharing that with you herein as time permits.

“Colombia is the next star of Latin America.” – Sam Zell

Chris has founded and built several multi-million dollar businesses in the investment arena including overseeing the deployment of over $30m into Venture Capital opportunities and advising family offices internationally. Prior to this, Chris built a career at Invesco Asset Management, Lehman Brothers, JPMChase, & Robert Flemings.
MORE ARTICLES »
PrevPreviousYes, Colombia! A Country in our Radar
NextThis One Thing Has Killed Before and It’s About to Kill AgainNext