Back by popular demand… Chris originally ran this post last year at this time. For those that lack holiday humor, relax, it’s just satire!
————–

I’m going to make a tribute to Santa this year! Christianity boasts 2.1 billion followers. If you add in non-believers like me, who still put up a Christmas tree and pile presents underneath it, you’re likely to ramp that number even higher.

I’m truly impressed with his business model and self reliance. This guy’s a genius.

Consider first that he has a huge supply of labour, and pays those little elves peanuts in his sweat shops up at the North Pole. Minimum wage is not in force at Santa’s grotto. The elves are actually overjoyed with the setup, since they consider it better than dying in the freezing tundra. There are unconfirmed reports the elves are actually part of a western Diaspora, escaping higher taxes and an ever-encroaching government.

Santa goes left untouched by the aforementioned governments since finding him that far north, where his factories are camouflaged by snow and ice, is both costly as well as potentially dangerous. The acronym-agencies can’t get up there safely without risking their lives.

The ‘Greenies’ don’t bother him either, despite his chaining up the reindeer, calling them ridiculous German names and thrashing their asses all around the world… in one night! Talk about animal cruelty. He makes the Japanese whalers look like choir boys.

In truth, he didn’t want to continue using reindeer.  It was upgrade time. However, he was forced to continue doing so after losing his cool during a groping incident with a TSA agent at JFK on a recent recon mission. Enough was enough for Santa. He stuck with the reindeer, which as we all know fly undetected by drones or radar.

He has subsequently managed to narrow his preparation time for the Christmas Eve journey by a full 11 months, due to no longer having to apply for all the varied visas. This has had an enormous impact on his costs and productivity. Revenues this year are expected to increase over 60% due to the elimination of this red tape alone.

As if the above was not enough evidence of his genius, what is really impressive is his marketing programme. He gives every child a shitty little toy, and then watches them flock to the shops to buy more of the same throughout the ENTIRE year. No need for a continuous and costly marketing campaign. Give them one hit, once a year, and you’re done. Talk about a loss-leader.

I have it on high authority that all those shitty toys are NOT made in China as stated on the packaging, but in fact outsourced to his sweat shops up North. They are in fact marked up 500% before being stamped “made in China” and sent through for shipment worldwide.

Wikileaks will never get anything on him either, since he uses a VPN for all of his communications, and the elves only use Hushmail to communicate. Of course he encrypts all his data with PGP as well. But, even if a leak did get out nobody actually believes Santa is real. He’s the master of illusion, a true sovereign man with his own sustainable community up north. He lives off the grid in luxury, no doubt feeding caviar to his cat while taking payment from the Chinese in gold stored at the new Hong Kong airport facility. Apparently, after reading Capitalist Exploits he no longer trusts in the USD. 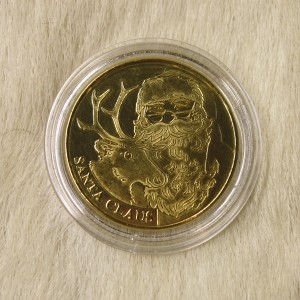 There have been unconfirmed reports that he plans to use his vast holdings of gold to launch a new gold-backed world currency called simply, the “Santa.” The world desperately needs it!

Following on shortly after the news that Santa was looking at launching his own gold-backed currency, the CIA confirmed that he was in fact a terrorist, likely financing any number of Mid-East terror groups.  It was proposed that he was also a drug dealer, and has evaded US Taxes. Stories have been leaked to the media via the DOD that he is wanted for questioning about an “inappropriate” sexual incident involving a Midwest soccer mom.

Then, just as this was going to print, the NSA confirmed to the NY Post that Santa had been neutralized. The agency released this picture. 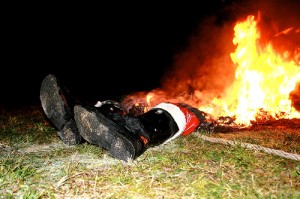 Subsequently, Santa has assured his fans via Twitter that he is actually alive.