Shark Tank on a Chair Lift

You’ve probably seen one of those ridiculous TV shows where some guy or girl has to pick from a lineup of potential partners. Contestants compete with one another to “win the affection” of a chosen bachelor or bachelorette.

An hour long dinner date or a walk on the beach and they’re going to pick their life partner. Heh. All of this is done with camera’s rolling. Completely natural. What can possibly go wrong with such a relationship?

In the start-up world the equivalent would be Shark Tank or Dragons Den which is actually far more realistic. Entrepreneurs pitch angels like this every day sans the rolling cameras. Entrepreneurs pitch their business plans to investors, much in the same way some young floozy tries to impress “Joe Handsome” without putting her hands down his pants for a good rummage. Let’s face it, that’d be both quicker and more entertaining.

While riding chair lifts at a ski resort last weekend with my family, it struck me that I had a twofold opportunity to borrow these concepts for a bit of fun and education… not the rummaging mind. A good friend of mine compared riding chair lifts on the ski slopes to speed dating. You’ve literally got about 10 minutes, depending on the run you’re on, to find out a little about the person or persons you’re seated next to. I figured why not combine speed dating with Shark Tank and do it on the 10 minute lift to the top of the slopes and see what might come out of it.

As it so happened there were two school groups on the mountain on the day. Both groups were 13 year olds on a field trip. We frequently ended up sitting next to a 12 or 13 year old as a result. I figured if 13 year olds don’t want to conquer the world then there’s something seriously wrong with them. Our plan was that my wife and I would rotate with our own kids taking one each and making sure we rode a lift with someone else on the lift. 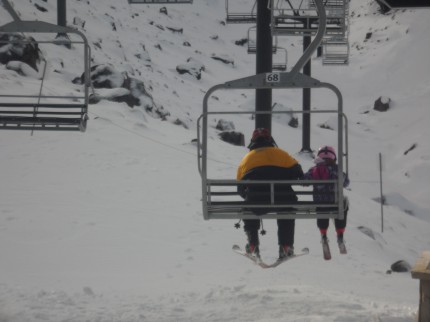 It worked like this: as soon as we lowered the safety bar on the chair lift we’d delve straight in and ask whoever we were sitting next to for their very best idea on how to make a lot of money. My kids were on fire with this and really got into it. They couldn’t wait to get on the next chair lift and began singling out who they thought we should line up next to in order to end up on the same lift with.

We did this all day long and by the end of the day between my wife and I, and our kids we had a smorgasbord of business ideas to evaluate. This in turn would spur some of our own ideas and act as a real time learning environment for our kids.

Padded lift chairs. Hop on a plane and you get economy and business so why not on the ski slopes?

Day 1: I might not pay extra and bother. I’m feeling frisky and I just want to hit the slopes. Just get me up there already.

Day 2: I’m wondering what the hell happened to me and have been reminded what gravity combined with speed can do to my body when I don’t remain upright. Each time the chair lift hits the back of my legs I have a certain level of discomfort.

Day 3: Now I’m really willing to sell my kids for anything that allows me more comfort. I’m bruised and aching. Upgrade me already.

When you buy your lift pass it comes as economy or first. First comes padded. OK.

Vending machine at the top of the slopes.

Hmm, frozen anything anyone? Don’t know about that one.

Another “guest” on our “show”, this time a middle aged man:

An app that shows the location of and helps you finds your family and friends on the mountain. Maybe it just uses their cell signal and tells you their proximity to you.

Perhaps a ski run plan is integrated so that you can determine which run they are doing. Thinking about it this would be an awesome technology for concerned parents letting their children ski on their own. Parents would be able to see if their precious spawn has stopped for any length of time. If the GPS locator says that they’ve been stuck on the middle of a black run for any length of time, chances are something is now bent the wrong way. Bones do that sometimes. Also, nobody answers a phone while barreling down the slopes. It’s illegal to drive and text and it sure as hell should be illegal to ski and text, though as with anything market forces are always the best. In this case, Darwinism has probably taken care of that already.

The man’s idea actually makes a lot of sense from a business perspective. For me, I’d rather stick with suspense and risk getting lost. Maybe it’s because the idea of being tracked everywhere I go, especially when I’m “getting away from it all” kind of flies in the face of my purpose, or perhaps it’s because I spend a boatload of time evaluating technology businesses that I’m just not particularly interested in actually using them. I care to see how they work, test them and evaluate if they can make money but I don’t much care for using them personally.

Sensors on the mountain road leading up to the base, which warn you of ice buildup. This came from someone who got stuck on the mountain on a previous day as the weather closed in and the road iced over. He drove up with no problems in the morning and by the time he went to leave he needed chains. It meant he couldn’t safely drive his car down the mountain and was forced to leave it overnight.

Upon final recapping with my kids on our drive down from the mountain my son says to me “But Dad these are other peoples ideas.” So what, I said? They don’t hold a monopoly on them.

Consider the Samwer brothers of Rocket internet fame. These guys have built an entire business model which involves not only finding other peoples ideas but in copying their businesses directly. They’ve literally taken business cloning to a whole new level. Groupon was cloned into Citydeal. They’ve cloned Airbnb, e-harmony, E-bay, Zalando, Pinterest and Zappos. Not only do they clone the business, they often sell it back to the original. With their net worth beginning with a B, who am I to argue with their monetary success?

Many of the products we all use today are a product of some level of copying. The laptop I type this on is a direct result of multiple versions of technology being produced, starting with the first mechanical computer created by Charles Babbage.

The Japanese have perfected copying and perfecting someone else’s original concept. Look at the rise of the Japanese auto industry. Instead of creating “new” technologies they copied existing technologies then iterated multiple times and perfected, and then perfected again, and again. Today they produce some of the worlds best products. They’ve moved well past copying.

You’re likely curious as to what my kids came up with. I’m proud to say that amongst some pretty bad ideas they thought that a concierge service at the base of the lifts would make them rich. Come down the mountain and a “porter” is waiting to take your skis, and boots from you, provide you with your own walking shoes, a hot cup of coffee or a cold beer. Walking in those damn boots at the end of a day is no fun. Hand me my soft comfortable shoes, a cold beer, and relieve me of my skis or snowboard and go pack them into my car for me. Then go fetch my car from wherever it’s parked and drive it up to me. I’ll pay for that.

Maybe I’ll make entrepreneurs out of them yet!

“I think there are always two challenges to build a successful company: Having an innovative idea is one thing, but being able to execute the idea properly the other. Whilst having full respect for the innovators, we focus most of our efforts on the latter and have been very successful with it so far.” – Oliver Samwer

Chris has founded and built several multi-million dollar businesses in the investment arena including overseeing the deployment of over $30m into Venture Capital opportunities and advising family offices internationally. Prior to this, Chris built a career at Invesco Asset Management, Lehman Brothers, JPMChase, & Robert Flemings.
MORE ARTICLES »
PrevPreviousCoffee Mugs, Human Organs, and AK-47s
NextAll Eyes Should Be on VolatilityNext