For those who may not be aware, Spain is a country which enjoyed one of the largest real estate manias in living memory. It continues to find itself mired in economic, political and subsequent social stresses.

By the way, if you are not already a subscriber to one or both of Chris Mayer’s newsletters you are doing yourself a disservice. When it comes to value investing for the long term, Chris is a stand out amongst the crowd.

Mark and I can’t recommend Chris highly enough. Do yourself a favour and GO RIGHT NOW to this link and give him a try. Seriously, do not pass go, and don’t procrastinate. You’ll also receive Chris’s book World Right Side Up complimentary with a 2-year subscription to Capital & Crisis for only $59, which is embarrassingly cheap!

You’ll likely have noticed that Mark and I rarely recommend newsletters, despite the fact that we’ve read and subscribed to probably hundreds of them ourselves over the years. When we say Chris Mayer’s work is worth your time and money, we mean it, and we aren’t getting a dime for saying so!

Chris Tell: Chris, you recently visited Spain, a land of sunshine, sangria, and a mythical creature that goes by the name of “economic growth”. Can you give me a sense of why Spain is not yet bankrupt, as simple math tells me they should be?

Chris Mayer: They should be, I agree. But Spain is part of the EU and the EU has the ability to rescue Spain if it should choose to print a bunch of money. That’s the big drama. What is the EU going to do? I don’t know. But I am not optimistic that things will end well for the people living here.

I’m kinda amazed that here we are in 2013 and we’re still talking about the EU banking crisis. It is the crisis that will not die.

Chris Tell: This drama should really have been resolved a long time ago. I mean by all accounts the government is completely bankrupt, and in fact I read recently on Reuters that they have just “borrowed” from their social security fund in order to pay pensions. It would be amusing, if it wasn’t such a tragic coincidence, that at least 97% of the social security pension fund itself is invested in Spanish Government bonds. I honestly can’t see how this doesn’t end in riots and some spectacular bargains. What was your sense of where we’re at in this Shakespearean drama?

Chris Mayer: My guess is that we’re probably in the middle. Unemployment is already 27% in Spain. Real estate prices have toppled. Some of its biggest firms are in trouble and on the brink of default – such as Cortes Ingles (which, by the way, is something like the world’s third largest retailer by sales). Bankruptcy proceedings were up 45% in the first quarter…and there has been social unrest, too.

Yet, the real distressed selling of assets – the real hard business of restructuring debt – has not yet happened. But I think we are on the verge of seeing something there.

Spain created SAREB in August 2012 as a condition of getting help from the EU. It’s a state-owned bank where Spanish banks can unload €90 billion in repossessed real estate. So, the long awaited debt restructuring is finally underway. I follow a number of private equity players and they are now just getting interested in Spain. Blackstone and Apollo are considering bits. And Kennedy Wilson – NYSE:KW on the New York Stock Exchange – is already there with an auctions business in Madrid.

Chris Tell: It seems to me that a massive Spanish debt restructuring has yet to take place. Since we lost the Peseta to the Euro we can’t expect to make any hay in the FX markets on the way down.

Greece was the first, and we were told the last restructuring, but then of course we had Cyprus where depositors were just plain robbed. Spain isn’t Cyprus or Greece though. It’s 4 times the size of Greece and we know that the EU actually doesn’t have the funds to bail out Spain, at least not without running the printing presses hot. I don’t know how its going to play out, but I do know I don’t want to be too early catching falling machete’s.

Leveraged assets such as real estate typically get hit hardest in restructuring situations. Did you see anything that you’d think of looking at when this unravels?

Chris Mayer: Well, I looked at real estate in the cities. My preference would be to buy the best assets in the best cities. But real estate is still not cheap, which is kind of mind-boggling when you consider the price drop. Housing prices on average are down 25% from their highs.

Yet, the gross rents in places such as Madrid and San Sebastian – both places I visited – are only 3-4% for an apartment. Consider that this is in a market with an awful macro picture, but it is also one where round-trip transaction costs are on the high end of the spectrum for Europe. It’s also probably the most tenant-friendly market in the EU. So, those yields are astonishing. You can get almost the same yield in Germany.

As I told my readers: Go to Spain. Enjoy the culture and the food and warmth of Spain’s friendly people. But don’t invest there. Not yet.

Chris Tell: One thing that I’ve been watching is the politicians in some of these countries and how they are playing their cards. It’s instructive to note that Portugal, Spain, and indeed Greece all have a history of military coups and in fact all three of them only became democracies in the 70’s. Did you get any insights into what people are thinking on the ground politically?

Chris Mayer: Well, this is the remarkable thing about it all. When you are there in Spain, it does not feel like a place in trouble at all. I saw plenty of busy restaurants and shops. There were no beggars. There were a few boarded up shops, but no more than I might see in any typical American city.

So, politically I detected a lot more apathy than I expected. It was certainly not an atmosphere for any pitchfork revolutionaries. Although, who knows… Anyway, it is always hard to get too worked up about anything when life is as pleasant as it seemed to be. This is another anecdotal reason why I feel like the market hasn’t hit bottom. I’ve been to markets when they were near bottoms or at bottoms. Those places are dead. The restaurants are empty. The construction sites abandoned. The business districts are quiet. There is a ghostly quality to it and fear runs high.

Even in the US, I remember going to New York City during the peak of the financial crisis and going to an Italian restaurant that was offering free wine to diners. I stayed in a hotel for $99 that you can’t stay in for less than $400 usually. That’s the kind of stuff that you see during bottoms. And that’s not Spain. Not by a long shot.

Chris Tell: The underpinnings of the problems, or should I say the ongoing drawn out problems are the Euro itself. What do you think Spaniards perception of the Euro is and did you get a sense that there is any understanding behind how the Euro itself is implicit in what is taking place on the ground?

Chris Mayer: Not really, no. One of the questions I asked was “Would you like to have the old peseta back?” It was funny, because they would tell me that they still convert euros to pesetas in their heads to get a rough sense of price and value. They have not yet fully adapted to the euro, even after all this time.

But anyway, they all said they’d rather keep the euro. The reason is actually easy to understand. The peseta was a terrible currency. It was very volatile. The euro by comparison is a great currency. And it makes doing business easier. They hop across the border to France or something and they don’t have to think about another currency.

This also gets to what you said earlier about Spain only becoming a democracy in the 1970s. The whole country is not that far removed from a nightmare in the Franco regime. And even now, the Civil War is still a very touchy subject among them. They are still finding graveyards. Old feuds still simmer below the surface. All the while there is a strong contingent saying “forget…” but it is not so easy.

All that is to say, I think the typical Spaniard feels like – even with the EU troubles – they are better off with the EU and Euro than going back to anything they can remember before.

Your humble editor again… Below are some visual representations of the true problems that Spain faces:

Yes, this is indeed the same pension fund which the Spanish Government is now raiding to pay pensions. Increasing withdrawals by government will undoubtedly lead to a sale of bonds, thereby pushing rates even higher.

Finally, the two charts below are courtesy of The Atlantic. 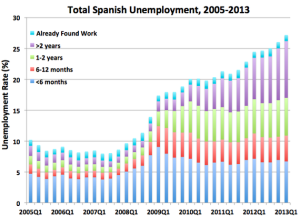 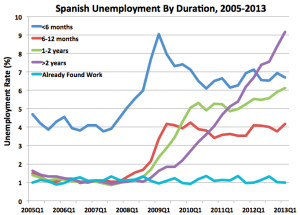 Ponder a bit and enjoy your weekend!

“We are single-digit years away from the most profound market clearing moment.” – Hugh Hendry