What should we expect after eating an exceptionally spicy 3-day-old, reheated “jungle curry” from a Mumbai Street Hawker?

Decisions made when investing, trading, and in fact almost any business all center around the calculation of probabilities. Probabilities for some things are easier to determine than others, which is where I’m headed with my lead question.

We can infer what may happen in the future by looking at the past, but very few people like to look to the past. We know this by simply reading history and watching humans repeat the same errors time and again.

Clearly humans take little notice. Perhaps because history is replete with misery, simply ignoring it makes more sense. More likely it gives people the creeps, being full of the stale breath of the dead, like an old persons home, full of knowledge but depressing nonetheless.

Deciphering the future or forecasting, as far as I can tell, is by and large a con game. A big joke, and very rarely a good game for those buying into the forecasts. It’s a conduit to sell something. The prophet/forecaster needs to only sound convincing, have a cleft chin, be tall in stature, twinkly blue eyes, swagger a little and voila. Don’t say I didn’t warn you.

Deep down most of us know this. It doesn’t stop most from buying into forecasts. The financial markets are not unlike religions, where prophets seek to lead their followers, and there is no shortage of followers. People love to outsource their thinking to Manila and Mumbai, which is how my street vendor can sell his 3-day-old, reheated “jungle curry”. I told you everything is interconnected.

Saner people will look to deepen their understanding of any market in which they’ve chosen to participate. This knowledge will, hopefully  provide them with insight and a clear edge. If they’re lucky the masses will then follow like sheep.

Right now I’m ready for anything, including Janet Yellen going completely loopy, biting off the head of a chicken on CNBC, pole dancing naked and threatening “a good time” with anyone who’s interested. Unfortunately she’s likely to do far more harm than that.

We do know that there are consequences to actions. Fundamentals do matter. Much like the probability of a violent and disgusting bowel movement following our reheated 3-day-old Jungle Curry surely outstrips the probability of something similar occurring after consuming a granola bar.

Probabilities exist in the world of finance. There are serious problems, which we’ve discussed in these pages occasionally, not the least of which would be a bond bubble which continues to inflate unabated. A crash would seem to have probabilities not dissimilar to that of giving a 16-year old the keys to your new sports car and a complimentary pub crawl all in one.

That rant behind us, let’s move on to some predictions for 2014. These are worth exactly what you are paying for them. Buyer beware!

Gold, the yen and the dollar

There are many factors at work affecting currencies. Interest rates typically play a major role, though today we live in the twilight zone where market correcting forces have been temporarily suspended. All are intertwined, as one affects the other, which affects the other and so on.

Based on the above you’d be silly not to own some gold, but is it time to trade it for a net long position? Probably not.

Remember that everything is interconnected. Right now we have this insane set of circumstances where central banks are acting in collusion to destroy their currencies and prop up their bond markets, and in all honesty they’re succeeding, at least so far.

Without a valid exit for market participants central bankers can continue to push the limits of absurdity. History shows us that when imbalances have occurred in the past the market has moved to correct those imbalances.

When the Pound Sterling lost ground there was an alternative, there was an exit available for capital. That exit was the USD. Today no such alternative to the dollar exists. It’s not Gold, it’s not Norwegian Kroner, it’s not yet Bitcoin, as none of these markets are deep or liquid enough to take meaningful capital flows. I discussed this very topic a long time ago in a post entitled “Ugly, Uglier, Ugliest”.

Given this setup, and an ever increasing bond bubble, I’m inclined to look to the weakest link in the chain. That link I believe is the Japanese bond market. Their current account deficit has just blown out, revealing a $5.7billion shortfall, the largest deficit in 29 years!  The pressure is clearly mounting. Wasn’t Abenomics meant to increase Japanese competitiveness? Oh dear!

Furthermore, I’m inclined to agree with our colleague and trader extraordinaire Brad Thomas, who believes this year will see the yen at 120 IF THINGS HOLD TOGETHER. If not watch out below. Brad’s staggered option trades on the yen, which you can get complimentary here, will soar by much more than the 77% we’re already up from just a month ago. It’s early days, but once again this is simply playing the probability game.

If you’re a fund manager who has to move a few hundred million dollars quickly you need a liquid market, and fast. Money will flood into the US treasury and bond markets. A US dollar rally will happen as a knee-jerk reaction to the panic, and Janet will push the liquidity pedal to the floor…because that’s all the Fed knows how to do!

Check out this dollar chart. Things look ready to pop. 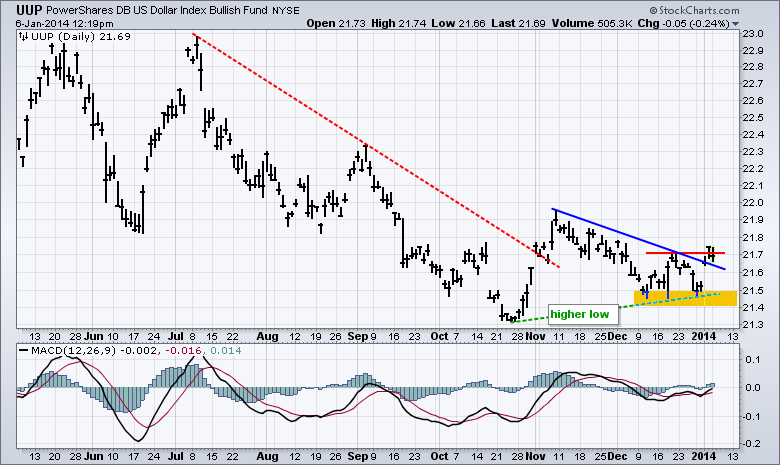 I don’t pretend to know how gold performs in this scenario, though I do think that being long gold and short yen won’t hurt. It’s a strategy I’ve been employing for a while, and first mentioned here. So far I am about break even. This of course sucks when you’re watching the S&P make new highs and your position sits their like a poodle waiting for a walk!

I’m sticking with it because the risk/reward on the trade gives me comfort. I’m trading one of the cheapest, most fundamentally sound currencies for one of the most fundamentally flawed, expensive currencies. It feels like the safest trade for me, though if you’re a trader you may want to go long USD into 2014 and leg out of the greenback on strength, picking up some more shiny stuff.

Once the market settles down and figures out how the world’s second largest bond market (Japan) got toasted, I think we’ll be in a better position to get long more of the precious metals, including the stocks…in a really big way.

On Tuesday next week we will throw out some other “guesses” for 2014, including updates on Mongolia, Bitcoin and our favourite…private equity (and crowdfunding). Then Thursday I’ll have a classic contrarian play that I think makes a lot of sense. It comes to us from our friend Mark Schumacher, portfolio manager at Thinkgrowth.

P.S. No quote, just a final thought… The second I think I “know” what is really going to happen my ego takes hold. Ego is the death of intelligent, critical thinking investors. Please read this post with skepticism and think long and hard about it. Compare it with whatever else you’re reading on the subject and feel free to throw rocks at my ideas. I could care less about having my theory play out and you won’t damage my ego, trust me. I care much more about being on the right side of a trade. Money talks and BS walks!

Chris has founded and built several multi-million dollar businesses in the investment arena including overseeing the deployment of over $30m into Venture Capital opportunities and advising family offices internationally. Prior to this, Chris built a career at Invesco Asset Management, Lehman Brothers, JPMChase, & Robert Flemings.
MORE ARTICLES »
PrevPrevious2013 In the Rearview Mirror – Part II
NextThe Potential Exists For an Epic Short Squeeze in Physical GoldNext