KFC and Burger King in Cambodia

The Colonel has dominated the local scene since he came to Phnom Penh in 2007. Though, I anticipate a sea change with a new player in town, the King, who has the potential to dominate the country.

No, I’m not talking about the upcoming elections or political strife, but something much more fulfilling…fast food wars. But before I delve into this further, a bit of history is in order.

Ever since the first KFC branch opened near Tiananmen Square, China in 1987, KFC has become synonymous with America. Whether people actually enjoyed the overpriced and low quality food fare I will never know, but they have flocked in droves to taste that famous blend of 11 herbs and spices ever since. Maybe this is all about experiencing “democracy” and being “American” for a meal. Regardless, 26 years on there are more than 4,000 KFC’s in China, with a growing number in Asia’s frontier markets, including Viet Nam and Mongolia.

It Is A Social Status For Some

While those of us with discretionary income may not think of fast food as a glamorous meal, over a billion others do. For those who can afford fast food, which rarely comes cheap, it is all about eating something exotic. It’s a means not only of feeding oneself, but more so exhibiting a certain social status. It is not uncommon to walk into a McDonald’s or Pizza Hut (The latter being a sit-down restaurant in Asia) and seeing a group of business men on their laptops, and glamorous ladies lunching.

When first coming to these frontier markets I found this bizarre, but now realise that this is something only those with discretionary income can afford. On the opposite end of the spectrum, when I walk into a fast food joint in America it’s just a wee bit different.

In the west fast food is cheap. In frontier markets it is ordinarily priced at multiples the cost of local food, effectively pricing out most of the population. Some meal combos in Cambodian KFC’s run more than $9. That’s expensive for America, let alone in Cambodia where GDP per capita is under $1,000.

New goods and services are priced in tiers, whereby a first mover targets the upper end of the market. Kith Meng’s Royal Group partnered with Malaysia’s QSR brands in 2007 to introduce KFC to Cambodia, and he seems to be doing just this. Setting aside the Swenson’s and Dairy Queens, which were introduced by RMA Group, KFC has had no real competition for nearly 6 years. That is until last month, when Cambodian businessman Sok Hong partnered with Viet Nam’s Imex Pan-Pacific Group Inc. to open the Kingdom’s first Burger King, located at Phnom Penh International Airport. They plan to have at least one more location opened by year’s end.

Surprisingly, The Pricing Is Attractive

I don’t like fast food, but that doesn’t mean it should be written off. When I visited Burger King last week on my way to Singapore, I was awe struck as to what I saw. The menu is cheap! 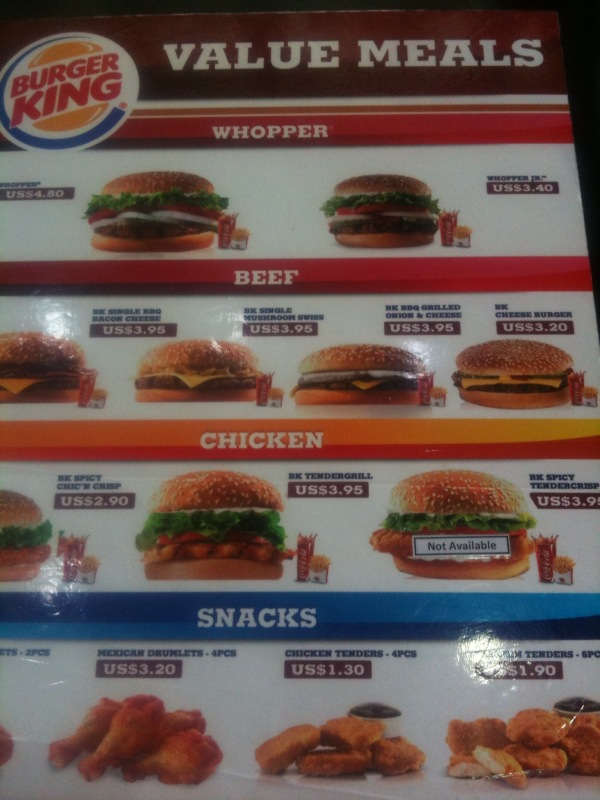 Burger King’s prices are in line with those in Singapore (Where fast food is inexpensive), and I interpret this to mean that they are targeting both the middle and upper class with attractive price points for menu items. Unlike KFC, if Burger King can garner a following with its American brand name and attractive pricing it should be able to turn a profit in short order.

The King Will Succeed

I look at it as a leading indicator. If Burger King succeeds it could set the stage for an influx of foreign brands selling goods and services to the masses. With a reasonable savings rate, Cambodians have the firing power when new opportunities arise for them to spend. Whoever said the number of fryolators in a country isn’t a sound economic indicator was just plain wrong!

“In the 21st Century obesity rates will be a sound measure of economic progress.” – Scott Baker