The Next Bubble to Burst – Student Loans

Scott is entering his senior year at a university in Boston, majoring in Business Administration and Finance. He is looking to enter the hedge fund industry after graduating.

I first met, and was impressed by Scott due to a proactive, value driven approach he has adopted to secure employment after graduating college. I previously discussed what I think about jobs in the future when discussing open source world, so its no surprise then that I love Scott’s approach. Instead of job hunting the old fashioned way, beating down Wall Street doors and joining the graduate masses in a frenzy, sending out embellished resumes that consist of purely academic credentials and any other bits that can be realistically added in to further embellish said resume, Scott instead writes a market update letter which highlights his interests and skills in the capital markets, with a focus on equities. This he sends out to those same prospective employers. This allows him to leverage his time, hone his skills and engage with those he is wishing to be employed by.

We gladly agreed to publish a piece that he brought to our attention that we have not seen reported on elsewhere. We hope you enjoy it as much as we did.

A bubble in the Market for Federal Student Loans

Bubbles are created when a positive feedback loop becomes too powerful to stop without causing a collapse. No one longs to be put in the spotlight for initiating a collapse, and therefore market participants remain silent. Having occurred for millennia, bubbles always collapse, whether it is the South Sea bubble of the 1720’s, the Japanese bubble in the capital markets or the housing bubble of the 1990’s and 2000’s. The western world has moved further left in its policy-making over the past several decades. Because of this shift, it should be expected that a disproportionate number of future bubbles will be caused by governments.

My work shows that the latest “in-vogue” bubble centers around Federal Student Loans for higher education. With a significant proportion of 4-year private colleges charging in excess of $35,000 per year, it is unfathomable to believe that the majority of parents, let alone students, have the funds to pay for their education out-of-pocket. The result is that students are leveraging their financial future for an education in hopes that future cash flows from a career will enable the loans to be paid back; after all, everyone is doing it. The flaw in that mindset is obvious; what if a job after college doesn’t provide adequate income to pay down the debt? With U6 unemployment stagnating near 16.0%, and graduates taking lower-paying jobs while forced to move back into their parent’s home, one can only expect an innumerable number of graduates to be laden with student loan debt for decades.

In an effort to prevent colleges from accepting an inordinate number of minorities and those who qualify for financial aid, the government has implemented the 90/10 rule. Put in place to prevent for-profit and technical schools from recruiting only low income students, the rule states that 10% of a university’s income must be sourced from non-federal sources. The 90/10 rule is causing harm to students, as a positive feedback loop has now been created. Financial aid allotments from government sources increase to cover tuition costs. This in turn causes colleges to raise tuition to increase revenue from students not receiving financial aid so as to remain in compliance with the rule. This vicious cycle will continue to intensify, resulting in ever-higher tuition costs, as the chart below shows.

Government subsidization in the student loan market does not work due to the high barriers to entry in establishing new universities. Subsidization is used to create more competition, therefore lowering prices. For example, the U.S. government subsidizes corn as opposed to lima beans. This results in more farmers growing corn than beans. This simple market disturbance, which causes farmers that are already growing corn to grow more, and those growing beans to transition to corn, negatively impacts the price of the commodity (corn). This is not true for colleges, and likely never will be, because the creation of new universities will cost hundreds of millions of dollars and take years of planning.

While government is largely to blame for throwing a torque wrench into the gears of the university system, universities should by no means be viewed as innocent, or even efficient. With 63.3% of high school graduates going on to attend college in 2008, according to Higheredinfo.org, colleges are taking advantage of the influx of students. Focusing on input rather than output, the incentives for colleges have shifted toward moving up in the rankings systems, such as those provided by the College Board, as opposed to churning out intelligent minds.

The reality of putting rankings ahead of students is obvious. Universities build new multi-million dollar dorms, decrease class sizes, hire poorly-qualified teachers and invest in faculty that produce research rather than teach. An astonishing example of “excess” in college living standards occurred at Princeton University’s Whitman College. Whitman has dormitory space for 500 students spread across SEVEN buildings. The cost of construction was $136 million which, when broken down, comes to $272,000 per bed. This is nearly as much as the average cost of a home in the United States, which during 2010 was $272,900 according to Census.gov.

The parallels between what is occurring in the student loan market and what led to the housing crisis are ominously similar. In the housing market we had predatory lending by institutions while interest rates were kept low by the Federal Reserve. In the market for student loans the government has aggressively lent to students, and in some cases offered more than necessary to cover tuition (think mortgaging 110% of your homes value), while also keeping interest rates low for an extended period of time. Additionally, it was perceived that owning a house was a worthwhile investment, however it was quickly learned that a home is not an investment, but rather a structure in which to keep the rain off and store your stuff. The same applies to higher education. Paying $200,000 for four years at a private university is a lofty sum to for a degree.

Where the water gets murky in comparing these two crises is what happens when a graduate cannot repay their debt. Homeowners were able to file for bankruptcy, lose the house and move in with family. Federal student loans are not able to easily be discharged through bankruptcy. According to the Direct Loans website, a loan “may be canceled if it is discharged in bankruptcy. This is not an automatic process – you must prove to the bankruptcy court that repaying the loan would cause undue hardship.”

To prove undue hardship, three criteria must be met. First, the lender must be unable to maintain a minimum standard of living; second, he/she must be unable to experience an improvement in their financial situation; and, third the borrower must have made a good faith effort to repay the loan. Proving this scenario, unfortunately, may become easier as the percentage of students who become delinquent rises.

According to a recent study by the Institute for Higher Education Policy, Student Loan Delinquencies are nearly 41 percent, far worse than what was seen during the “housing crisis.” In 2005-06 student loans issued were $83 billion, while the 2009-10 year saw $106 billion issued. Outstanding student loan debt sits around $830 billion, and will likely exceed $1 trillion by 2014. Those unable to either pay down their debt or file for bankruptcy will likely become indentured servants to Uncle Sam. 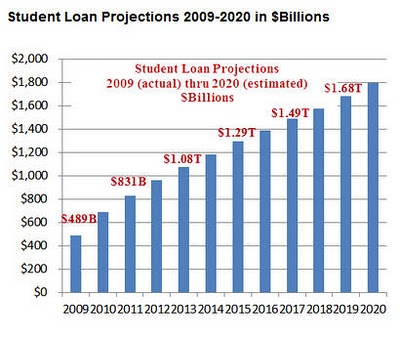 In my undergraduate studies I see the unintended consequences of government meddling in the student loan market on a daily basis. The system continues to unravel as colleges invest in inputs rather than education. This will occur until students either strike, as in Chile (different circumstances – similar argument) where students are boycotting classes, or prospective (new) students refuse to attend universities in protest of astronomical tuition rates. Another (likely) outcome is that the default rate on loans becomes so high that the government decides to reassess its involvement as a “lender of last resort” to students. With the Fed Funds rate being held at 0.25% through mid-2013, time will tell as to how many hundreds of millions (or billions) more will be “invested” in students… The bubble grows ever larger.

“All good things must come to an end, but all bad things can continue forever.” – Thornton Wilder

Thanks for that Scott!

Parts of the world may well be in a bit of trouble at present; however, we are optimistic that true capitalists, which is to say those providing value, will always find a way to solve our myriad problems and create higher standards of living for all.

If anyone wants to get in touch with Scott to receive his market commentary, or even to put him on your watch list of prospective hires, drop us a note and we’ll pass details along.

Chris has founded and built several multi-million dollar businesses in the investment arena including overseeing the deployment of over $30m into Venture Capital opportunities and advising family offices internationally. Prior to this, Chris built a career at Invesco Asset Management, Lehman Brothers, JPMChase, & Robert Flemings.
MORE ARTICLES »
PrevPreviousRandom Lessons Learnt So Far…
NextIdeas are Just a Multiplier of ExecutionNext