As the housing boom of the 2000’s minted new millionaires every second Tuesday. So, too, the shale oil boom minted wealth faster than McDonald’s mints new diabetics. Estimates by the UND Center for Innovation Foundation in Grand Forks, are that the North Dakota shale oil boom was creating 2,000 millionaires per year. For instance, the average income in Montrail County has more than doubled since the boom started. Taken direct from Wikipedia:

Despite the Great Recession, the oil boom resulted in enough jobs to provide North Dakota with the lowest unemployment rate in the United States. The boom has given the state of North Dakota, a state with a 2013 population of about 725,000, a billion-dollar budget surplus. North Dakota, which ranked 38th in per capita gross domestic product (GDP) in 2001, rose steadily with the Bakken boom, and now has per capita GDP 29% above the national average.

I wonder how many North Dakotans have any idea the effect low oil prices are going exert on their living standards, freshly elevated house prices, employment stats, and government revenues. We’re all about to find out. Here is the last piece in our 5-part series by Harris Kupperman exploring what this means for the fracking industry, oil in general, and the one topic nobody is paying much attention to: the petrodollar. Enjoy! [hr] Date: 27 September 2015 Subject: There Will Be Blood – Part V Starting at the end of 2014, I wrote a number of pieces detailing how QE was facilitating the production of certain real assets like oil where the production decision was no longer being tied to profitability. For instance, shale producers could borrow cheaply, produce at a loss and debt investors would simply look the other way because of the attractive yields that were offered on the debt. The overriding theme of these pieces was that the eventual crack-up in the energy sector would precipitate a crisis that was much larger than the great subprime crisis of last decade as waves of shale defaults would serve as the catalyst for investors to stop reaching for yield and once again try to understand what exactly they owned. Fast forward 9 months from the last piece and most of these shale producers are mere shells of themselves. If you got out of the way—good for you. Amazingly, these companies can still find creative ways to tap the debt markets, stay alive and flood the market with oil. Eventually, most won’t make it and I believe that the ultimate global debt write-off is in the hundreds of billions of dollars—maybe even a trillion depending on which larger players stumble. That doesn’t even include the service companies or the employees who have their own consumer and mortgage debt. I believe that shale producers are the “sub-prime” of this decade. As they vaporize hundreds of billions in investor capital, thus far, there has been a collective shrug as everyone ignores the obvious – until suddenly it begins to matter. By way of timelines, I think we are now getting to the early summer of 2008 – suddenly the smart people are beginning to realize that something is wrong. Credit spreads are the life-line of the global financial world. They’re screaming danger. I think the equity markets are about to listen.

Then again, a few hundred billion is a rounding error in our QE world. There is a much bigger animal and no one is talking about it yet – the petrodollar. Roughly defined, petrodollars are the dollars earned by oil exporting countries that are either spent on goods or more often tucked away in central bank war chests or sovereign wealth funds to be invested. I’ve read dozens of research reports on the topic and depending on how its calculated, this flow of capital has averaged between $500 billion and $1 trillion per year for most of the past decade. This is money that has been going into financial assets around the world – mainly in the US. This flow of reinvested capital is now effectively shut off. Since many of these countries are now running huge budget deficits, it seems only natural that if oil stays at these prices, this flow of capital will go in reverse as countries are forced to sell foreign assets to cover these deficits. 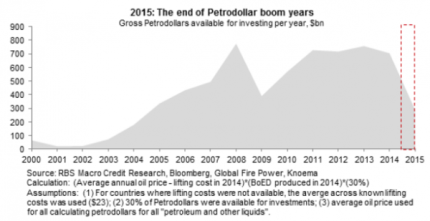 Over the past year, the carnage in the emerging markets has been severe. Barring another dose of QE, I think this carnage is about to come to the more developed world as the petrodollar flow unwinds and two decades of central bank inspired lunacy erupts. 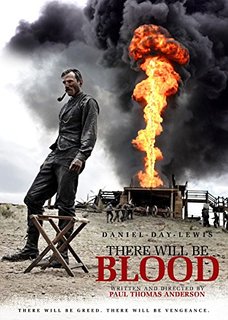 [hr] We agree with Harris, and not coincidentally the petrodollar unwind forms a part of the global USD carry trade unwind I’ve been harping on about recently. – Chris “So, ladies and gentlemen… if I say I’m an oil man you will agree. You have a great chance here, but bear in mind, you can lose it all if you’re not careful.” – Daniel Day-Lewis, There Will Be Blood