This is What The Impending War with Syria Means for Gold

Without sifting through the rotting underbelly of the political machine to determine the real reasons why the US and the UK need to go to war in Syria, I’d like to look at what the coming war means for real money. Yes, the shiny stuff.

There are a few common misconceptions that surround war and gold:

Lets deal with the first supposition.

Destroying infrastructure, goods, buildings and then killing people and subsequently removing their skills from the labor force can never be good for an economy. It’s an asinine assumption trumpeted by social scientists such as the MMT crowd, which I dealt with in my recent article This Company’s Burn Rate Should Scare The Hell out of You!

Now, let’s deal with the second supposition that war is good for gold and look at what happens when a war breaks out.

Firstly, people in the affected area attempt to secure what assets they can and get the heck out of Dodge.

Gold being a stable “money” performs well relative to the collapsing currency, but so do alternative currencies.

What is important is that market participant’s focus is NOT on overall currency debasement, but on singular currency debasement. As such, don’t attribute value to gold over that of competing currencies that can provide rapid execution, liquidity and preservation of capital. (Note: I’m not suggesting the USD or Yen offer preservation of capital, I’m simply suggesting that this is what market participants believe, and until they believe otherwise the outcome is likely to be as suggested.)

This is therefore not an environment which portends a long and sustained bull market in gold, since most eyes are on the trees and not the forest. One tree is on fire (Syria), or maybe a few trees are on fire (Egypt, Libya and Syria), but the forest still holds safety, especially on the other side of the lake, or river (United States and Japan).

So, when WILL gold get its legs again?

I think Gold will move when the realisation that deficits do matter becomes apparent to a sufficient number of market participants. What is that sufficient number? I wrote a post entitled Changes at the Margin – How to Prepare for a Disorderly Move, in which I discussed this very topic. The takeaway from that post was that a market needs only to change at the margin.

Numerous examples exist. One need only to look at any of the historic stock market crashes, where one day the birds are singing on Wall Street and the next day brokers are jumping out of windows.

What happened in one day, people ask? A market needs only to change at the margin.

This brings me to what makes for a massive, disorderly move…the kind that gets those brokers jumpin’… LEVERAGE.

Keep that in mind while we return for a moment to gold and ask some more questions.

Q: Gold is the antithesis of what?
A: Fiat money.
Q: What is Fiat money in today’s monetary system?
A: Debt
Q: Debt issued by whom?
A: Sovereigns who control the Fiat
Q: Are these Sovereigns leveraged?
A: Hahahahaha

Pay attention, because here is the answer to when gold will run, gallop and stampede.

The biggest bubble on this ball of dirt right now is Sovereign debt. If debt is simply long dated currency, and if currency is under attack, then the promise to pay said currency in the future should be under attack, right? But, it isn’t…yet.

The antithesis of this debt and currency is, you guessed it….Gold

Unless this (Syrian) war rapidly turns into a global war, which is always possible, I think gold will be region-specific. It’ll probably catch a bid on overall sentiment, but as I watch my screens now I see the Yen moving higher than gold with the same fundamentals underlying this whole steaming, seething mess. 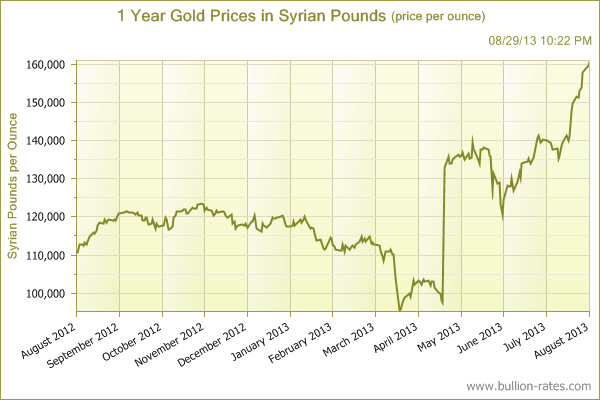 Only when a consensus change takes place with respect to global sovereign debt will we see a sustained bull market in gold. Since the bubble in sovereign debt exceeds anything this world has ever seen, my guess is that the other side of this coin promises to be pretty spectacular.

It is for this reason that I have a substantial position long XAU/JPY.

I’m confident being long “real” money while being short the currency of the worst offender on the Sovereign podium, will work out for me provided I manage the position.

We’ll just have to see what happens…like everything else.

“You can’t make war in the Middle East without Egypt and you can’t make peace without Syria.” – Henry A. Kissinger

Chris has founded and built several multi-million dollar businesses in the investment arena including overseeing the deployment of over $30m into Venture Capital opportunities and advising family offices internationally. Prior to this, Chris built a career at Invesco Asset Management, Lehman Brothers, JPMChase, & Robert Flemings.
MORE ARTICLES »
PrevPreviousThis Company’s Burn Rate Should Scare The Hell out of You!
NextOn the Ground in MozambiqueNext