This Simple Strategy Could Have Potentially Saved Billions

When I tell people what I do in private equity I get strange responses. “Oh, that sounds so great, so glamorous,” while the head rolls back and people look at the sky, perhaps imagining all the glamour.

Maybe they are thinking international travel, negotiations in board rooms with expansive views over exotic cities, big fish tanks and million dollar artwork adorning walls. Or maybe lobsters at swanky restaurants topped with Moet & Chandon. I don’t know but I assure you it’s nothing of the sort.

Actual deal making is only a small part, usually the little bit at the very end. The icing on the cake, the sealing of the envelope, the final handshake, so to speak. But, and this is the point, nothing ever gets to that point without due diligence.

Anyone focused on deal making to the exclusion of due diligence is exposing themselves to undue risks. Private equity investing is probably not dissimilar to being a teenager engaging in hanky-panky with the girlfriend while the parents are out. It can be quite “rewarding” but the risks are high and getting caught with your pants down could be, well – catastrophic!

Due diligence is more than probing the numbers to see if they’re correct or in the case of projections, something we deal with a lot in early stage companies, it’s about thoroughly investigating the strategic rationale for a business.

When it comes to the latter point I like to think of this as “periphery due diligence”. This is where you look beyond the numbers but really put them under the microscope with context. Part of this process is in searching for unreliable or unreasonable assumptions, flaws in logic, or inconsistencies in either the business plan or in what we as investors are being presented. This needs to be done objectively and as is often the case, in the event that even after many months of due diligence, money and time spent finally walking away if the risks are to high.

What Happens When Due Diligence is Ignored or Faulty…

Take a look at literally any sector that is hot in M&A and I guarantee you’ll find acquisitions which add little value or make absolutely no sense at all being made. Matchmaking made in hell.

What happens, I think, is middle aged men in shiny shoes and tailored suits forget who they are, and regress to thinking like teenagers fueled by Iron Man movies and lacking any worldly experience. I’ve seen senior management in large corporates target a particular company for acquisition. All sense leaves their head and they’re back in 16-year old bodies trying to chase the same basketball, ready to elbow any competitors should they get near.

War is a great motivator and senior management, instead of taking out some aggression with a decent round of paintball on the weekend with mates, suddenly see their chance to become the Chinggis Khan of the corporate world. Context and reason go out the window.

Sure, you’ll see companies go through all the motions of doing DD. A slew of analysts will be appointed to analyze the target company’s books but really what they’re doing is just verifying data. The decision to buy has in fact already been made.

You should never have decided to buy BEFORE due diligence is completed!

Senior management is often just waiting for validation from quants in order to do what they’ve already decided they’re going to do. They already have played the video in their head and they’re successful, on the front page of business journals and the envy of all at the golf club. Quants, on the other hand, are solely looking at numbers and sometimes not even that. Context is thrown out of the window. Periphery vision is nil. Nobody is really throwing rocks at the company treating it as if it’s a make or break component. 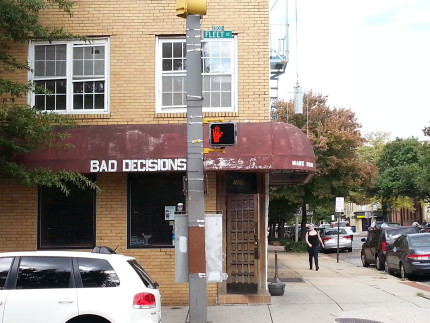 Speaking of being caught with ones pants down, consider some of the senior management teams that have been caught up in hubris, arrogance and lack of periphery due diligence:

The above are wonderful examples for anyone to investigate, should they care to. But it won’t stop this process from repeating itself again and again.

There are any number of reasons why mergers and acquisitions can fail. Sometimes it’s a corporate culture clash, other times it’s an industry at it’s peak and the merger of two troubled entities simply exacerbates rather than reduces risk and failure.

I do wonder, however, how often hubris, arrogance and plain stupidity play a part. Stupidity, along with the cockroach and the AK-47, are the most indestructible things on earth. They’re always going to be with us.

When it comes to evaluating a deal, and this goes for any deal, fully understanding the motives, desires and REAL aspirations of the target company is of paramount importance. This is true whether you’re looking at a corporate merger or investing in private equity.

Once you’re OK with setting your ego aside, looking for context in each deal and evaluating a business accordingly means you’ve solved more than half of the battle. This is a battle between your own ears more than anything else.

One of my partners uses this technique when running due diligence. I first witnessed this over 2 years ago and now use it regularly. He asks particular questions more than once. This may sound trivial but I can’t tell you how many times it’s been a lifesaver and revealed important elements in the business.

There are always going to be questions or topics which elicit a response that is too hasty, too contrived or maybe just outright awkward to answer.

What you have to do is to ask a question and then later on in conversation ask the same question again but in a different context. You then have the ability to compare answers to see if they’re congruent.

Let me give you an example.

On a deal I was working on I had been discussing with a CEO his personal time commitment to the company. The gentleman was on holiday when we managed to meet. He was adamant that he would do everything it took to make the company work, including working 24/7. Sacrifice was no issue whatsoever.

In a second and far more casual conversation over drinks he told me that his wife was pregnant. I had already ascertained that he did not yet have any children or other commitments other than his business. The conversation went something like this:

Me: Wow, that’s awesome. That’ll be an exciting change in your life.

Entrepreneur: Absolutely! I am looking forward to spending as much time as possible with my wife and baby. My wife also wants to move out of the city to a more stress free environment.

Me: Are you going to move?

Entrepreneur: Sure, we are thinking of moving out here [here was an island in Thailand], I just need to get this company funded so I can employ some staff to take care of the heavy lifting for me.

Had I asked the same question regarding his commitment to the company in a slightly different way I’d have got a completely different response.

In a separate deal which we were conducting DD on in late 2013 we asked a company about their inventory situation and delivery time for their product. After getting the answer we later asked for more detail around the processes involved in the manufacturing process. The answer received immediately showed us that the earlier answer couldn’t have been correct since there was a gap in timing. As it turned out the founders were lying to us. They were telling us what they believed we wanted to hear.

When companies are less than truthful that is an immediate elimination. We never go back to the table no matter what. Management is THE most important aspect, bar none.

The one thing that I have to keep reminding myself of is that you never HAVE to invest.

The deals need to come to you and make sense.

Chris has founded and built several multi-million dollar businesses in the investment arena including overseeing the deployment of over $30m into Venture Capital opportunities and advising family offices internationally. Prior to this, Chris built a career at Invesco Asset Management, Lehman Brothers, JPMChase, & Robert Flemings.
MORE ARTICLES »
PrevPreviousThe Anatomy of a Carry Trade Bubble
NextIs US Dollar Carry Trade a Menopause in the Currency Markets?Next

I’ve been wanting to comment on this article for 1 week – finally getting to it.

“Trust but Verify” – Yes, so true in many things in life, the Gipper had it correct. It is difficult to ask the tough questions of potential business partners or even potential life partners! But that is the only way to determine who you are REALLY dealing with, plus an unemotional analysis of the numbers. Give me transparency, not “creativity” when answering the tough questions or providing the necessary financial data. The whole world is one big pile of fluff right now but there are still pockets of real people with real assets and real opportunities.

That is why I like CapEx and the guys behind it – they know human behavior and aren’t all suited up puffing their chests in front of potential investors while dreaming of only positive outcomes and great riches. There is so little TRUTH in the world these days, finding networks and investments that are built upon it is like finding untapped and untouched alpine spring water. You gotta know what is filthy and questionable before you can appreciate the few pure plays, if you are lucky and diligent enough to uncover them.