The State Of Affairs Of The Nuclear Power In Germany 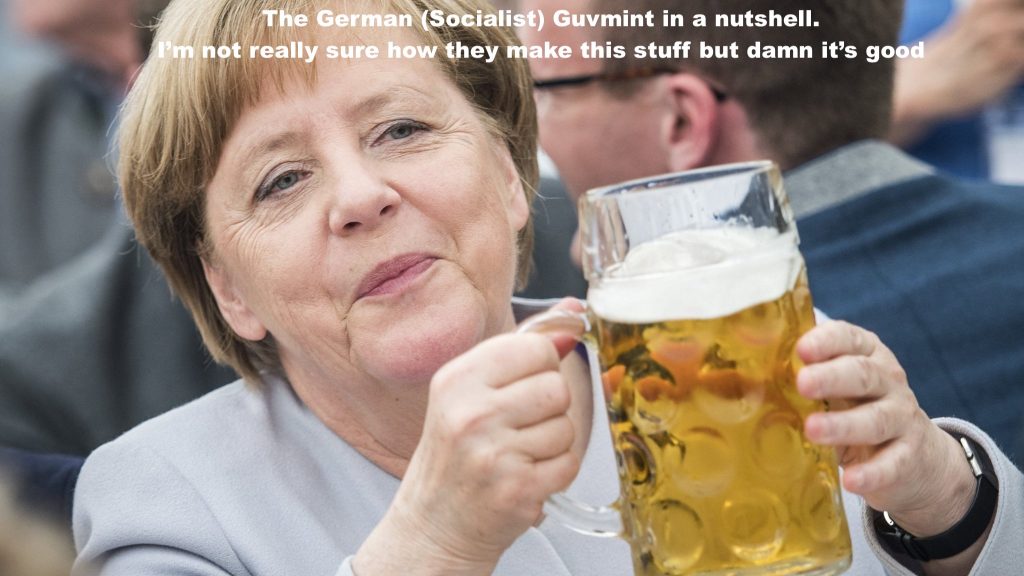 Last week Merkel leaned left and it worked. Truth be told, she had to.

In any event, she managed to form a coalition government that’ll now (because it’s left of left) pursue certain policies which are … how do the Germans say it… verdammt dumm.

But it’s not all bad news. Certainly, those of the hairy arm-pitted disposition will be celebrating with a glass of organic Elderflower wine while scanning the web for a new pair of hemp trousers, eagerly awaiting those subsidised lunches (they’re a basic human right, dammit), and tweeting motivational hashtags to their “besties” on Instagram and Twitter.

So expect more noise from these “if you’re male, you’re a rapist, if you’re white, you’re an institutionalised racist, and if you’re a capitalist you’re a frickin’ mercenary” social justice warriors, who do battle in their yoga pants with a latte in one hand and smartphone in the other (two items brought to them, I may add, by capitalism).

Let me be clear, they’re bloody reprehensible and as I mentioned before, discrimination is how society regulates itself. But hey, that’s just the reality of the world we’re currently enjoying.

Such is life. Though it’ll only hasten what I call the easiest short in history.

Anyway, this reminded me of some of that “verdammt dumm” I mentioned.

You may not remember it, but since I track this sort of arcane stuff, I do.

It was back in 2010 when there were a number of anti-nuclear protests in Germany and, the following year, not coincidentally soon after the Fukushima disaster, Merkel’s government announced it would close ALL of its nuclear power plants by December 2022. Since then Germany has permanently shut down eight of its 17 reactors. 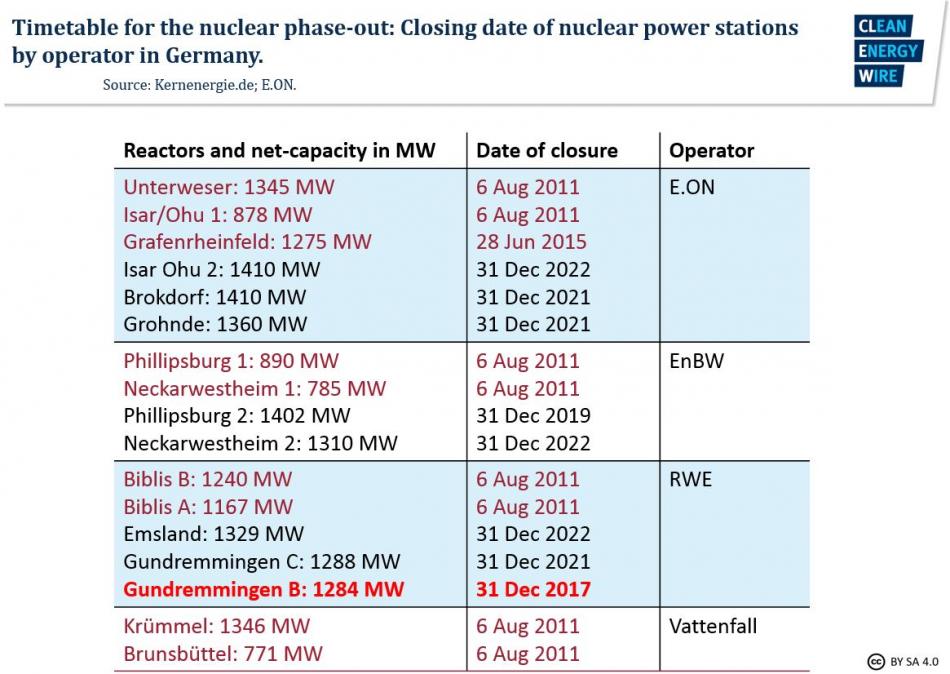 “What did they replace the inevitable energy shortfall with?”

Well, for starters they began importing electricity from France and Poland.

“Really? Wow! Tell me, then, where do France and Poland get this electricity?”

I’m looking at the natural gas numbers here from Wood Mackenzie, who are as reliable a source of data as we can probably get. Here I learn that Germany gets about 40% of what it consumes from Russia, which is the world’s largest exporter.

And according to these fine folks at Wood, that dependence is only going to increase to over 50% by 2025.

And this is where things get really tricky. You see, on the one hand we’ve strong men coming to power globally — something I’ve mentioned half a dozen times here, including the ramifications of this. One of those ramifications we’re seeing take place RIGHT NOW:

As reported by the Financial Times:

European Commission officials on Monday presented EU member states with a €2.8bn list of more than 100 US products that could be affected in response to any move by Washington to levy tariffs.

Tit for tat. This ought to be fun.

These storm clouds have been gathering on the horizon for some time as long-time readers know.

But consider this. Already U.S. lawmakers have proposed stiffer sanctions on energy companies that do business with Russia, which, I dare say, puts Germany in quite a difficult spot.

Which is why I find it remarkable and simultaneously verdammt dumm that Merkel and co are pursuing the path they are.

In particular, after realising that subsidising solar in a country that only rarely actually enjoys sunlight was particularly verdammt dumm, they are now pushing ahead to build what is known as the “Nord Stream 2” project. This is a $10Billion pipeline that will transport natural gas from Siberia all 3,000 km to the motherland. Economically this makes a lot of sense. Geopolitically? None.

A New Level Of Stupid

That is to say they’ll be doing business with Russian companies, Gazprom to be precise. This places them under Putin’s thumb while simultaneously pissing off their US counterparts.

So here we sit and watch the tensions rising (as I’ve promised you they would) and realise that the demand for electricity isn’t going away anytime soon.

And bear in mind that we’re not dealing with trivialities here. Modern society absolutely NEEDS energy despite what the loons who seethe with bitterness at those who provide them with that electricity will chant at you.

The Truth About Nuclear Disasters

I hear you say. What about these truly horrendous nuclear disasters we’ve had? Think of all the children with 2 heads wandering about, I hear you say.

I’m here to tell you it’s a non-issue and only enters the collective psyche because of how we homo sapiens process information.

You see, nuclear when it goes wrong is a bit like a Boeing 747 going down… or a tsunami wiping out a town. It kills a decent amount of people really quickly and for this reason it is imprinted on our minds and memories. On a whole, though, it’s the safest thing we’ve got.

But don’t trust me. Here are the facts (the total number of deaths by energy source): 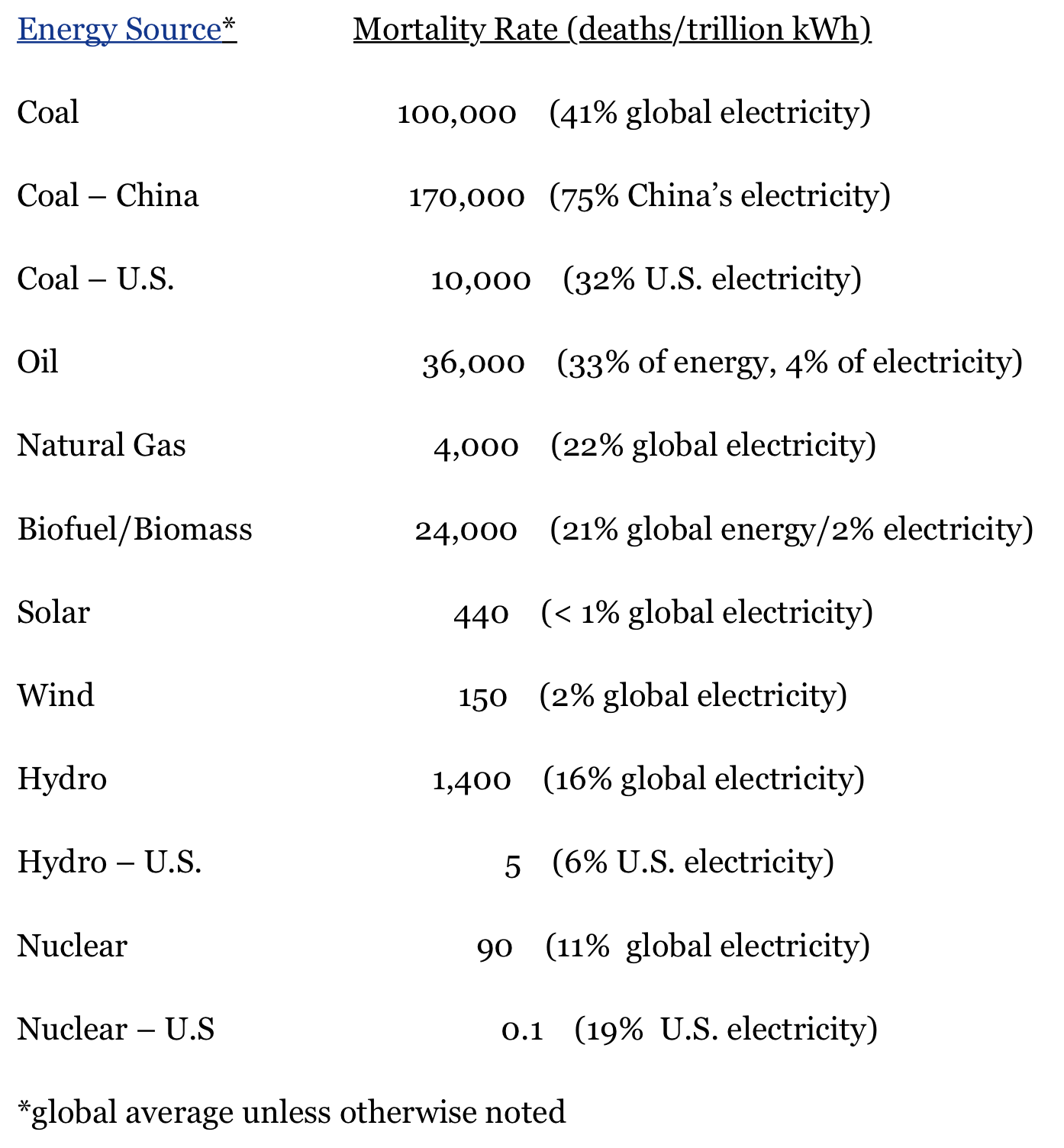 The Science Behind Nuclear Reactors

The fact is that uranium, pound for pound, is quite simply unbeatable as a source of base load power. Here’s the comparison compliments of the European Nuclear Society:

With complete combustion or fission, approx. 8 kWh of heat can be generated from 1 kg of coal, approx. 12 kWh from 1 kg of mineral oil and around 24,000,000 kWh from 1 kg of uranium-235. Related to one kilogram, uranium-235 contains two to three million times the energy equivalent of oil or coal. The illustration shows how much coal, oil or natural uranium is required for a certain quantity of electricity. Thus, 1 kg natural uranium – following a corresponding enrichment and used for power generation in light water reactors – corresponds to nearly 10,000 kg of mineral oil or 14,000 kg of coal and enables the generation of 45,000 kWh of electricity.

When Nothing More Is Left To Be Said

Now, I realize that explaining facts to social justice warriors is futile. You may as well be saying “hey come and join me, we’re going to go down the local kindergarten and beat toddlers to death… with clubs” because they’re no more interested in facts, or science, or data than they are in working for a living.

But at the end of the day we’re lucky enough to live in a world that is always in flux and as such not every country is embracing verdammt dumm.

Japan, for starters, who shuttered all their nuclear facilities following Fukushima have since reopened 8 with another 30 in the permitting stage.

China, who’s become the world’s fastest expanding nuclear power producer have 38 nuclear power reactors in operation and another 19 are under construction. In fact, those sly buggers have increased their total number of operating reactors by more than 10 times since 2000.

And this means that nuclear power, and thus uranium, isn’t the worst place to look for opportunities.

“Facts are stubborn things; and whatever may be our wishes, our inclinations, or the dictates of our passions, they cannot alter the state of facts and evidence.” — John Adams

Chris has founded and built several multi-million dollar businesses in the investment arena including overseeing the deployment of over $30m into Venture Capital opportunities and advising family offices internationally. Prior to this, Chris built a career at Invesco Asset Management, Lehman Brothers, JPMChase, & Robert Flemings.
MORE ARTICLES »
PrevPreviousInsider Weekly: This Market Is Finally Turning
NextHands Up, Who Wants To Be Long Crazy?Next