Right now fully one third of the world’s countries have built (or are building) walls.

Two months ago in an article entitled “7 Steps To The Easiest Short In Recent History” we looked at a combination of factors supporting the inevitable disintegration of the Euro currency experiment:

If you look carefully at each of these steps you’ll notice they all entail in some way either physical or psychological barriers being built. Often both.

Today we’re taking a look at the incredible global shift taking place towards more physical barriers and then we ask some questions about what this means for us all and how we may protect ourselves and profit from what appears to be an unstoppable trend.

According to a recent article in the Washington post:

“In 2015, work started on more new barriers around the world than at any other point in modern history. There are now 63 borders where walls or fences separate neighboring countries.” 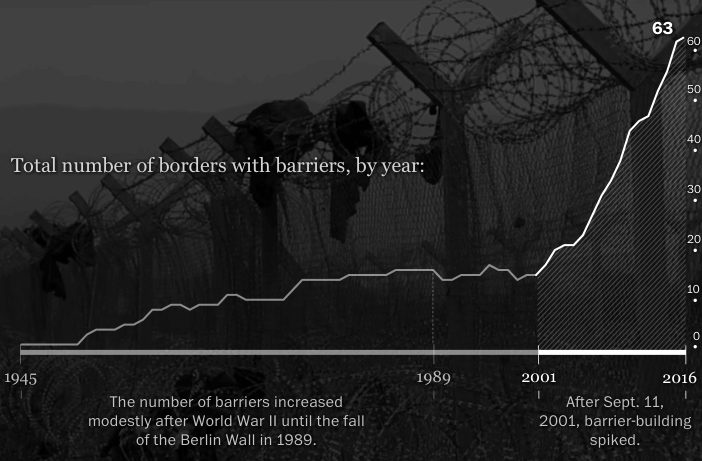 Most of these walls are being erected within the European Union which is not surprising. As mentioned before, Brexit is as much about the refugee crisis, stopping mass immigration, and what is seen by many as the islamization of Britain as it is about the myriad insane regulations the Eurocrats in Brussels foisted on our scone eating and tea drinking friends.

But Europe is not alone. Walls are being constructed across the Middle east, Asia and Africa, making this a global trend.

The quite brilliant Dr. Pippa Malmgren the former US presidential advisor and author of Signals: The Breakdown of the Social Contract and the Rise of Geopolitics wrote an excellent article on the topic of walls being built around the globe arguing that countries can put up walls but that capital will pull them down again.

“Walls don’t usually work or last. Hadrian’s Wall didn’t stop the Scots. The Great Wall of China didn’t stop the Mongols or the British. The Berlin Wall too was overwhelmed by the tide of history. In the end, capital finds a way to flow to wherever the profits are, on either side of walls. But, for now, it looks like money will flow, as it usually does, to the side of walls that permits the greatest freedom of movement, whether that be a movement of people or capital or goods.”

These walls are quite simply a manifestation of the economic consequences of policy decisions taken over the course of multiple decades.

As mentioned the vast majority of the walls being built are in Europe. European politicians are erecting these walls while failing to understand that it is socialism and the welfare state in particular that attracts migrants. Walls do a poor job of keeping out uneducated angry people of a different language, different race, different religion, and different culture. Far better, change the system.

Imagine for a minute that there was zero welfare in Europe, which is going to happen for simple reasons of mathematics anyway. Imagine further that in order to gain entry to live in any European country immigrants needed to prove their worth, by way of education, capital, skills or even cultural beliefs, and be able to pay their own way, by way of savings, working, and contributing to the society which they wish to enter. With no handouts and serious repercussions for not pulling their weight (starving) the entire migrant crisis that engulfs Europe today would be a complete non-event.

When cultural differences rise up, instead of holding steady to their existing chosen culture, they resort to a political correctness justifying, explaining away and by default condoning behaviours which are anathema to the citizens. They then scratch their heads at the problem of millions of Africans and Arabs swarming in to get a slice of the good life. A 10 year old can piece this together.

Every one of us would do the same thing. The problem isn’t that Europe is being flooded by immigrant’s. The problem is that Europe isn’t attracting the “best and brightest”, but instead importing millions of people who’ve spent their lives picking up bad habits from political, economic, and social conditions which hark back to the dark ages. 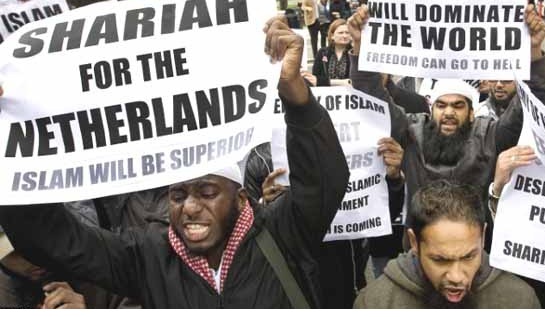 The Power of Numbers

When a single person or family with bad habits migrates to a new society, the social and economic forces prevalent in that society tend to force them to assimilate or be rejected. Bad behaviour gets them into trouble pretty quickly and they are generally ostracised. Many leave and return to their homelands as a result. The culture shock is too much for them.

On the other hand, when hundreds arrive they quite simply bring with them their own culture and begin enforcing it in their new homeland. There are now areas across Europe where it is no longer safe to go… even for the police.

This massive culture clash is what is fuelling the frantic wall building we now see.

Of course walls don’t build themselves and so it’s the rise of “strong men” that provides the narrative and populism for these barriers. 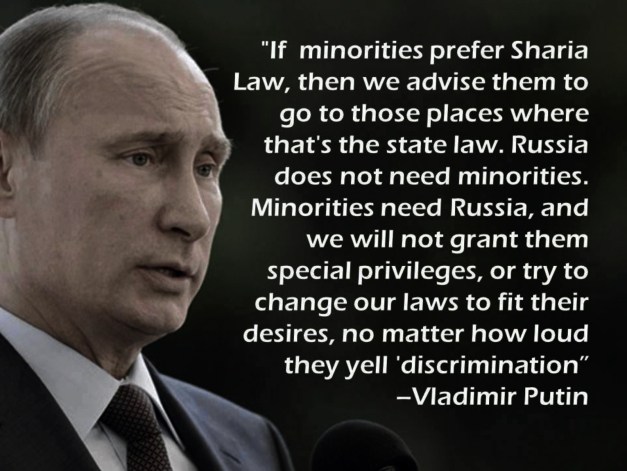 One reason Putin is one of, if not THE most popular head of state in the world, is due to his stance of looking after Russia and Russians and not bending to the nauseating political correctness that has pervaded the developed world.

A political correctness I may add that is on a very short fuse as discussed in “Why A Politically Correct West Ensures A Trump Victory”:

It’s not just physical walls but trade barriers, such as tariffs, quotas and subsidies which are all rising at the same time too.

The movement of capital has become so onerous that opening a simple bank account in a foreign country has become more painful than a root canal treatment. Yet one more reason I think Bitcoin has asymmetric potential. The free market always finds a way.

The socialist experiment of the nanny state is in it’s death throes and unfortunately it is capitalism which is being blamed, rather than crony capitalism and the great Ponzi scheme that is the welfare state.

The building of walls will not solve these issues. What they will do is simply bring the very last tool out of the central bankers toolkit. That of fiscal stimulus.

This too will not work. Why?

Collateral has been falling in the global system, accelerating the collapse in the velocity of money, and the collapse in liquidity, even while central bankers have flooded the world with credit.

Couple this with the demographic headwinds to growth and debt and it’s pretty clear to me that the socialist experiment that the developed world has enjoyed since WWII has peaked and instead of receding back into the shadows like a shy fox, is more likely to spontaneously combust in the public square.

This sad trend of wall building is likely to be part of our existence for some time yet and will do nothing to solve many of the political or financial problems but rather accelerate them.

Some Facts to Consider

When barriers to trade are reduced GDP rises and when barriers are increased GDP falls. I’ll let you figure out which way GDP growth is going over the next few years.

Borders themselves are a relic of the nation state, which itself is a constipated ideological structure which grew out of the industrial revolution. It is absolutely coming to an end and is accelerating in its decline. These last ditch efforts to save it will simply accelerate that decline.

Think about it like this. If the math doesn’t work with rising GDP then pray tell how it’s going to work with falling GDP. No. What we’ll get is simply another injection to the patient, this time from fiscal rather than monetary stimulus, which itself will simply increase the already unmanageable debt burden. What we don’t know is when the market repudiates this insanity.

Looking at the bond market right now it’s entirely possible (though we won’t know for sure until after the fact) that the highs for the bond market were back in March of this year. Either way the end result will be chaotic and painful for those caught on the wrong side of it.

Looking around the world there are still places which are NOT erecting walls.

While we can all go long cement and barbed wire, really what I’m curious to know about are your geographical preferences. And please comment below if you have somewhere specific as I’d love to know your reasoning.

“National borders aren’t even speed bumps on the information superhighway.” — Tim May

Chris has founded and built several multi-million dollar businesses in the investment arena including overseeing the deployment of over $30m into Venture Capital opportunities and advising family offices internationally. Prior to this, Chris built a career at Invesco Asset Management, Lehman Brothers, JPMChase, & Robert Flemings.
MORE ARTICLES »
PrevPreviousInvesting In The ‘New Normal’ With Chris Mayer
NextNever Invest In These HORRIBLE Things. Ever!Next