Take a look at the volume of stocks listed vs. indexes listed going all the way back to the days of bellbottoms, loud hair, and orange wallpaper. 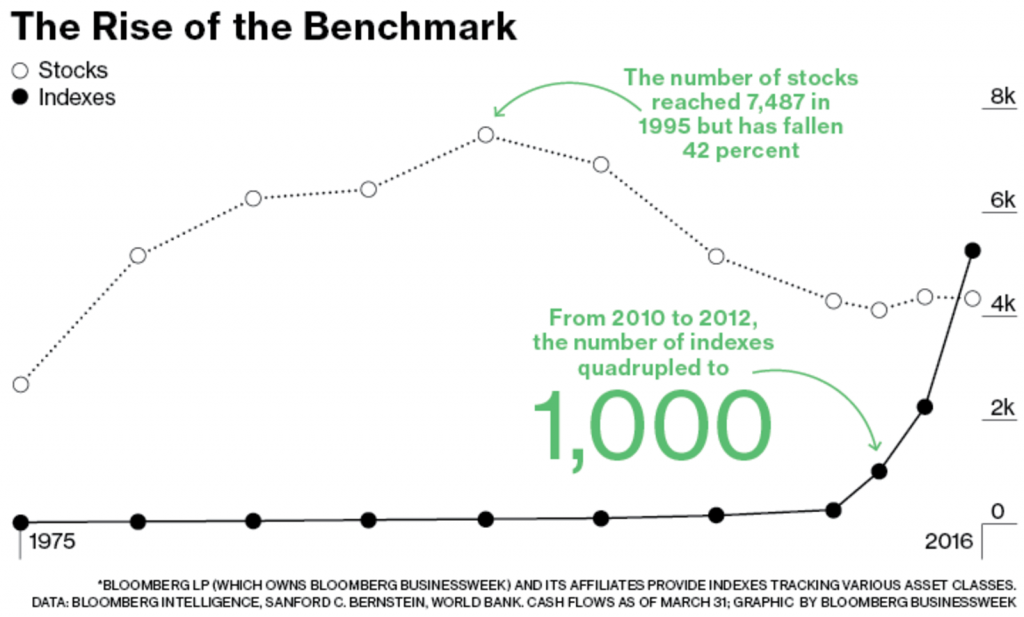 Since 1995, the supply of stocks, particularly in the US, has been shrinking faster than Trump’s approval ratings. At the same time, the number of indexes have exploded like one of Kim’s shiny new missiles.

In a falling interest rate environment, the twin pressures of reduced returns and relative cost pressures have meant that investors, in order to make a buck, have flooded into the low fee structures offered by passive strategies. These include indexing, ETFs, and those truly insane creatures I’ve written about before: low volatility ETFs.

But what about those alpha generating hedge funds? Aren’t they meant to be smart and able to beat the market… any market?

Those alpha generating hedge funds have things called LPs. And though LPs may be smarter, and certainly wealthier than Joe Sixpack, they’re no less human. And human attention span and patience level has been in decline… correlated no doubt with the rise of social media and the Kardashian crowd. Like a virus, it infects everything.

As performance from hedge funds has been poor relative to the benchmarks, a self reinforcing situation where hedge funds, in order to ensure LPs don’t redeem, have landed up hugging the indexes.

This is the exact opposite of what hedge funds were meant to do, of course. In many cases, they themselves are simply buying the indexes, trying desperately to figure out how the hell they’re going to survive through the next quarter but determined simply NOT to underperform the index. It’s a losing strategy no matter how you slice and dice it.

This, in turn, leaves active hedge funds who refuse to get sucked in with increasingly substandard returns. They can explain until they’re blue in the face why certain indexes make no sense but when those indexes just keep rising day after day, month after month, it becomes a very tough stance to keep. Redemptions follow, and so by doing the right thing, they’re punished. And by doing the wrong thing (following the mob), they may get to stay alive just a little longer and this is what many have resorted to.

We all know that at some point there are no new buyers available to enter the market and hoo boy, do we then have a problem.

So… you either join the party or you leave the party.

The last to leave the party is Hugh Hendry and his baby Eclectica.

Hugh follows Eton Park and Perry Capital to name but a few more.

Paul Singer of Elliot Management fame put it well in his July investor letter to stakeholders.

“In a passive investing world, small shareholders have little-to-no voice and no realistic possibility of banding together, while the biggest shareholders have no (repeat, no) skin in the game so long as the money manager does not underperform the index.”

The rise of passive indexing is a bubble in dumb money.Click To Tweet

Make no mistake, the rise of passive indexing is a bubble in dumb money.

We have a situation where the market is becoming completely lopsided and increasingly so at a blistering pace.

If it gets anymore lopsided, it’s going to be upside down. What’s more, the market participants have no interest or even determination of valuations.

An index doesn’t give an isht what the P/E ratio of any stock included in the index is, and the investors buying it have even less idea. It doesn’t care if the aggregate of stocks sitting inside its womb are over or indeed undervalued. It’s just a dumb bloody index, and you can’t blame it anymore than I can blame my dog for not understanding Shakespeare.

Those investing in passive have done so partly due to relative fee differentials, partly due to performance. But now also dangerously so… due to increasing inflows, which have continued to push values higher.

Now, having markets or sectors get silly is obviously as normal as a peanut butter sandwich, and provided you’re aware of it, we’ve little to worry about.

But what’s more frightening than the Kardashians in skinny pants is that as capital has fed into passive, the usual countering forces (active managers) of the market have been leaving the party, which has left the passive world to increasingly swell like a neglected infected wound.

What we need to think about is that increasingly there is no active market to stabilise this. It’s akin to having a 5-year-old’s party, inviting a troop of the critters, and then promptly sending all the parents down to the pub for a few hours.

Just as short sellers provide a balance to a market so, too, active management (who incidentally typically have skin in the game) have always provided a stabiliser to the overall market. What happens when the stabilisers all leave the room?

And here’s the thing. The algos constantly feed back the daily data to recalculate their probabilities (read this article on VAR shocks). Risk? Nah!

At the extreme of the passive world sits volatility.

Selling volatility works really well. Just ask Neiderhoffer who has made godawful amounts doing it over the years.

Look closely, though, and you notice that even Neiderhoffer, who knows what game he’s playing, blows himself up spectacularly from time to time… and I mean complete armageddon wipeout stuff. Until that blow up comes, though, you just keep plugging away at it day after day and it just keeps paying you… day after day. You make money, make money… and then, well…

It all turns to isht and blows up in your face.

Who’s willing to bet with me that over the next decade being long smart active strategies and short passive (low volatility ETFs) will be a winning trade?

“What could be more advantageous in an intellectual contest – whether it be bridge, chess, or stock selection than to have opponents who have been taught that thinking is a waste of energy?” – Warren Buffett, 1985 Berkshire Hathaway Letter to Shareholders

[…] We have a situation where the market is becoming increasingly lopsided at a blistering pace in favour of passive indexing, ETFs and low-vol ETFs over hedge funds with smart active strategies. Read our latest thoughts on what’s likely to result in the coming years… [Read more] […]